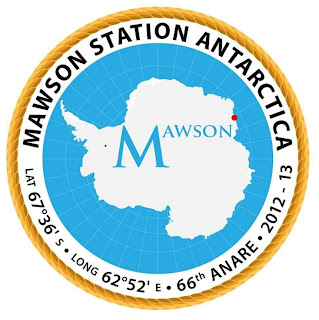 Posted by Craig Hayhow at 03:20 No comments:

I have just purchased my year's supply of booze to take down with me.
Things have changed and these days there are strict restrictions on how much booze you can take to Antarctica and how much you are allowed to consume. Two standard drinks a day is considered a safe consumption of alcohol. On the up side, there has been a 100 year tradition of brewing beer in Antarctica and at each station a brew master is appointed and all hands get together to bottle the brew. Brew masters experiment with many new and exotic boutique blends throughout the year to supplement our booze rations. The formula used in the Divisions drug and alcohol policy is as follows;

Using these guide lines I have ordered the following booze to take down;

All booze is purchased duty free and is locked up in Fort Knox and a weekly ration is issued once a week. To give you an idea of how much we are being ripped off, 1 bottle of Jim Beam Black Label cost me $17.85 for a liter bottle. ($39.95 for 700ml bottle in a shop) The Aurora Australis is a dry ship on the trip down and back.
Posted by Craig Hayhow at 01:01 4 comments:

So how will I get there ?

I will be traveling to Mawson station in Antarctica aboard the ice breaker Aurora Australis.
This purpose built vessel was built in 1990 and is owned and operated by P&O Maritime Services and is leased to the Australian Antarctic Division for it's Antarctic resupply, crew change and science programs. I believe the ship is now approaching the end of it's service life and will be replaced some time in the next five years. It's takes about 12 days sailing to get from Hobart to Davis station and the resupply will take about 8 days. It will then be a further 4 days sailing to reach Mawson station. On the extraction it should take about 12 days to sail from Mawson station back to Hobart if the weather is favorable. Shipping and resupply in Antarctica is very hit and miss due to the weather and the sea ice conditions. Resupply at Davis station will probably be done about two kilometers from shore unless the sea ice breaks up completely, using a two kilometer fuel line and helicopters while at Mawson hopefully the harbor will be completely free of sea ice and the ship will be able to moor withing the harbor and fuel resupply will be done with a short fuel line and boats will be used for cargo and personnel transfers. 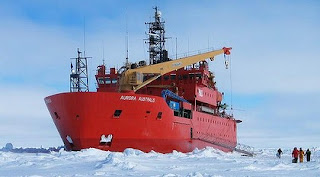 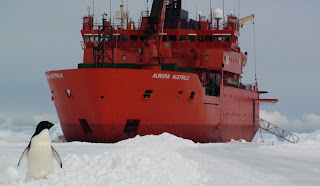 Bunkers - 1.10 Mega litres of cargo fuel with
a transfer rate of 40 k litres per hour. 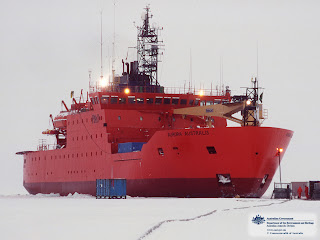 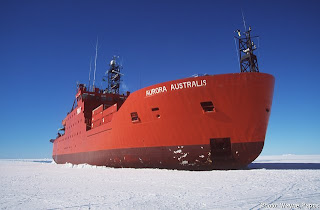 Posted by Craig Hayhow at 19:09 No comments:

A land of extremes

In winter, a band of sea ice surrounding the continent extends ice coverage from 13 million square kilometers  to some 20 million square kilometers. For millions of years snow and ice have built up on the land, so that now all but 2% of the continent is buried under a permanent ice sheet. The ice sheet holds 90% of the worlds ice, which is 70% of its fresh water. Bound into the ice is a unique environmental record stretching back to more than one million years. The ice and air trapped when surface snow turned to ice, provide a continuous record of earth's climate and other variables, such as changes in atmospheric gas composition and volcanic fallout.

The ice sheet averages 2.4 kilometers thick (4.7 kilometers at it's thickest point). If all the ice were to melt, the level of the world's oceans would rise by 70 meters. If the weight of the ice were removed, it is estimated that the underlying rock would rise by 1000 meters. The Antarctic ice sheet is moving gradually outwards at speeds varying from a few meters to several kilometers each year. When it reaches the coast as glacial ice, it breaks off to form ice bergs.

Antarctica has not always been an icy continent. Two hundred million years ago, Antarctica was joined to Australia, Africa, India, New Zealand and South America in the giant, mid - latitude, continental landmass of Gondwana. When Gondwana broke apart some 60 million years ago, Antarctica became cold and geographically isolated  forcing many species to extinction. The surviving life forms evolved to endure the harsh environments. Many of them, including emperor and Adelie penguins, are found nowhere else. 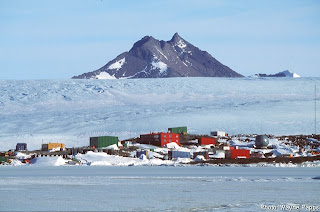 Mawson station in the foreground with the enormous ice plateau rising up behind to meet Mt Henderson
Posted by Craig Hayhow at 18:18 1 comment:

53 years prior to my arrival at Mawson station, my step father Bill Kellas was wintering at Mawson station as a Bureau of Meteorology observer. Back then expeditioners were real experditioners and conditions were tough without all the mod cons and fancy equipment I will have at my disposal. During his visit to Mawson, Bill was the first person to bring a motor bike to Antarctica. You can read more about this here.    http://thevintagent.blogspot.com.au/2008/04/velocettes-in-antarctica.html 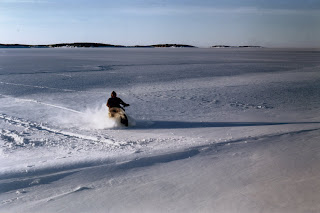 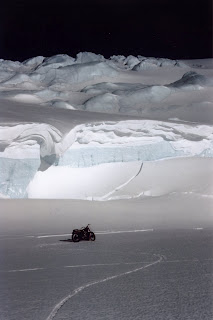 Bill also has two small Islands named after him North West of Mawson station.(Kellas Islands) This was common practice back then. Most of the buildings Bill worked in at the station are still there and still in use. They are now protected under the heritage act and are maintained by station staff. It is going to be a strange feeling working in the same buildings where Bill worked 53 years prior.
In Bills day, most of the travel in Antarctica was done by dog sled. Here is an example on display at the Australian Antarctic Division headquarters. Maybe Bill even used this sled?  There are many fascinating old relics stored at the Australian Antarctic Division headquarters including old skiddo's, accommodation huts, tractors and many other interesting artifacts. 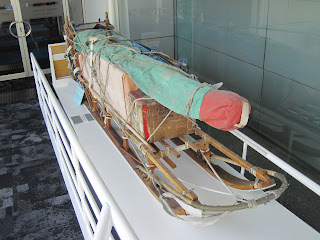 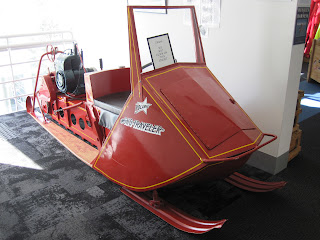 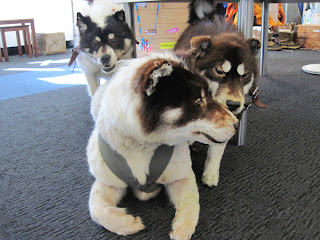 Huskies were used up until 1992 when they were all removed from the continent as part of the Antarctic treaty. All the dog kennels are still at Mawson and I am told you can still smell the seal blubber that was used to feed them in the dog food storage area 20 years on. 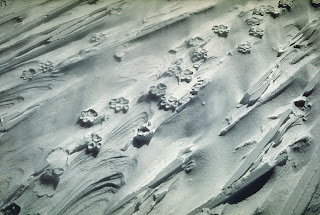 It’s amazing the changes in just one generation as my mode of transport will be by quad bike close to station and by Hagglund during deep field trips. 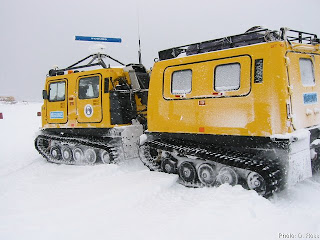 Well, I have now moved to Tasmania and living in a nice apartment in North Hobart only a short walk to the CBD and wharf area. I am sharing the apartment with the lead wintering plumber for Mawson, so there shouldn't be a problem if the dunny blocks up. The weather has been fine, sunny, windy, raining, hailing, snowing, tornadoes but the afternoon was fine, and guess who packed shorts and T-shirts and never even thought about a rain coat or winter cloths…..ooops ! Hobart is very beautiful and like a big old country town with lots of old stone buildings and little wooden houses. The fishing port is right on the main street. One of the best things is the cheap fish & chips on the foreshore, the big juicy scallops are awesome. 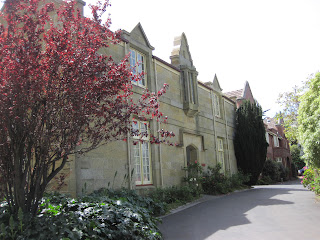 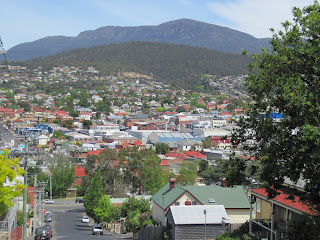 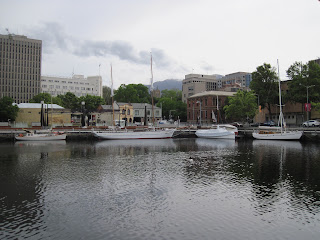 The Australian Antarctic Division facility is ultra-modern and very large and the people are all friendly and happy to help which makes a refreshing change. It’s been a long time since I've had a job where everyone is keen and happy to go to work !! There is a really good display setup for tourists in the front of the building with husky’s and sleds that Bill probably used at Mawson. Out the back are all the old machines, accommodation & equipment also possibly used by Bill. The kitting store is wicked, it’s like a Kathmandu store the size of K-mart ! Everyone is envious of me going to Mawson especially on my first trip as it is the most sort after Antarctic station with the best scenery, wild life, history, small crew and great facilities. There will only be 15 expeditioner's wintering at Mawson and this is the first time in a long time there will be no women. One of my secondary rolls will be the Environmental Officer. 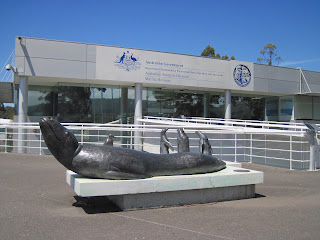 The Mawson wintering team will be made up of the following people; 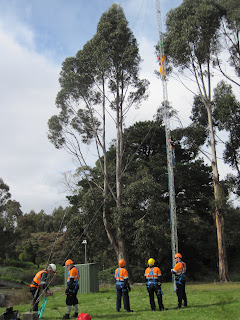 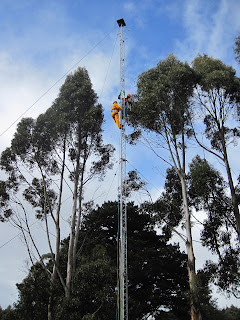 The Aurora Australis has been stuck in sea ice for the past two weeks so this will probably push the shipping schedule forward for the next three voyages including V3 which is mine, which was due to sail on the 9th of January 2013. The first thing they tell you here is you must be flexible and I'm starting to understand why. If you wan't to follow my voyage to Antarctica, first to Davis station for crew change and re-supply and then onto Mawson, you can check the ships position at this web address;

The live web camera on the Aurora Australis can be viewed here;