Blizzard this morning, minus eight degrees and wind gusting to ninety knots, so it’s going to be fun trying to get down to the operations building this morning. The wind was so strong and almost at the limit of my endurance. I was exhausted just moving from the red shed to the operations building and I forgot to zip my pockets up and when I got to the operations building they were full of solid ice. I didn’t bother putting on my bib & brace shell and my work pants were soaking and frozen and covered in snow and ice. The bloody stuff gets into everything including my boots and under my jacket. It’s like gearing up to go scuba diving just to walk between buildings which normally would take a few minutes but in a blizzard it takes ten times as long.

After lunch I was asked to fix a problem with the cinema as we have a foreign movie night tonight. After fixing the cinema I spent four hours cleaning and fixing the cinema, recreations room, library and bar. I collected so much shit to throw out, warren will be very happy. I was exhausted when I finished around five, then I did my washing, had a shower and then went for dinner. Dinner was braised stake & onions, mashed potato, beans, collie flower & broccoli. The movie starts at eight tonight so I have an hour to write some blog notes.

Well the movie was great, real life and no special effects, car chases and any Hollywood bullshit. After there was an awesome aurora, my first and it was great. I turned all the lights off outside and laid on my back on the outside steps for half an hour and it blew my mind. I got up and woke Keldyn even though it was twelve thirty as I knew he would appreciate it. He got up and headed off up to the tank house with his camera and tripod while I laid back on the steps to take it all in. It swirled all over the sky and there was a few satellites mixed in with it and I was mesmerised and after about an hour I realised I only had thongs on in minus six and my toes started to hurt and I had to call it quits. If this was a piss weak aurora, I can’t wait to see a good one. Putu and I spent three nights two hundred kilometres up into the Arctic Circle in Norway, way further North than I am South now hoping to see an aurora and we never got the privilege, I wish she could see this light show now. Later in the year when they get better I will attempt to film them in time laps. It’s getting darker at night now and tonight the moon came up for half an hour, so every day it will get darker and the auroras will get better. 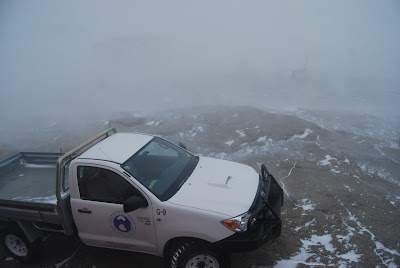 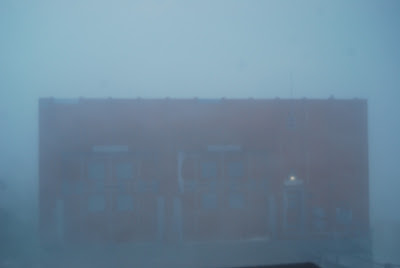 It's impossible to capture a blizzard with a still camera. I will add a short movie soon.