Today started off very slowly as I was so tired and it took me a while to get going. My day started bad when I knocked my head on the filter control box and broke the arm off my reading glasses. After doing the APANSA filter change I went back to the red shed and made some lunch and a coffee. It was another perfect breathless day again today, so I decided to go out on West arm and take my camera & tripod and take a series of photos to stitch together to make a nice wide shot of the station.

Cookie suggested I go over to East arm as the ice sheet was making strange sounds and threatening to break out, so I took his advice and headed over that way. Indeed the ice sheet was groaning and moving up and down with the swell. It was like a huge set of lungs breathing in and out. All the seals and penguins sitting on top couldn’t care less. It was very interesting but after a while I decided to l follow the coast back into the station and then keep going out to West arm. Along the way I saw another huge jelly fish like the one I saw yesterday but this one was twice as big.

Close to the old hanger I nearly stepped on 4 Weddell seals scaring the hell out of me. They couldn’t really care less and as I was already so close I gave the smallest one a scratch on his rear flippers. He seemed to like it but was also a bit ticklish. I felt like giving him a big hug and a scratch and rough up but thought best of it. I was almost back at station when I was crossing some spray ice in front of the hanger being careful not to slip over when I went arse up landing heavily on my left hip and dropping my camera and tripod. I laid there in pain for a while then got up and accessed the damage.
After a while the pain went away and I discovered I had broken one of the legs off my tripod which upset me. My camera appeared to be fine though. Walking back I bumped into Lloyd who was going to read a book in the sun but decided minus two was a bit cold. We chatted and then I headed off to West arm. After about twenty minutes walking I had reached the top of West are and I setup my broken tripod & camera the best I could and when I turned the camera on I discovered it was broken too and not working properly. I was very disappointed and walked all the way back to the red shed and dropped both off and went down to the transmitter building.
There I spent a couple of hours assembling my 6m yagi antenna and looking for a suitable place to mount it or to erect my portable tower. In between this I had a listed on my radio and a Perth station was romping through on 20m. Later I went back to the red shed for dinner and to catch up with all the guys that had returned from field training. After dinner I checked my camera with the 18-55 lens and it worked perfect, so the 55-200 lens is broken and I will attempt to pull it apart tomorrow and see if I can fix it. I will be very disappointed if I can’t fix it as I use this lens 90% of the time.
On a different note, I have been wondering where the penguins go when a blizzard hits and I have solved the mystery. They crouch down behind a rock or some shelter and bury their face in the snow and let them selves get buried over. The snow acts like insulation and protects them from the extreme cold. 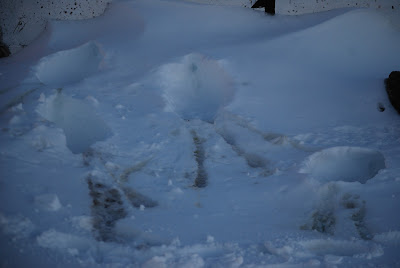 You can see the penguin's face print in the snow and you can see how the wind direction has shifted during the blizzard by the direction of the penguins shit trail. 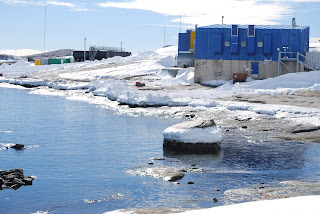 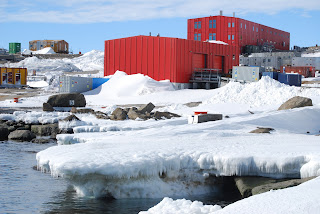 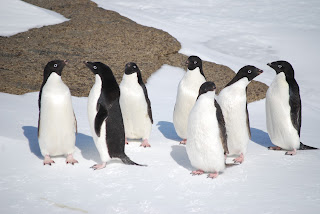 Aren't they so cute 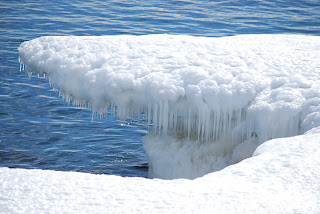 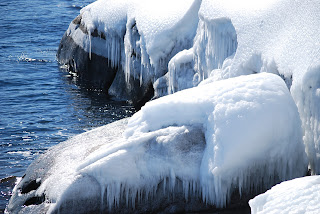 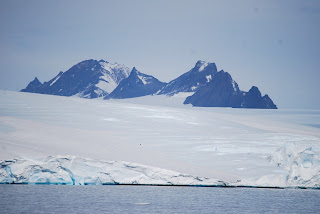 These ranges are 27kms away. The highest peak is where I landed in the helicopter and "fang" is the pointy peak. 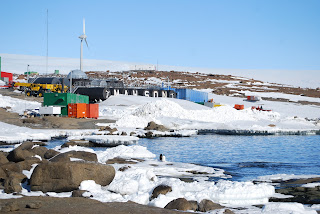 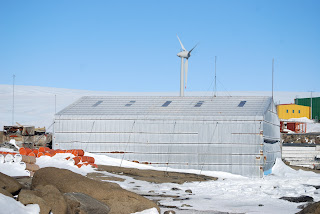 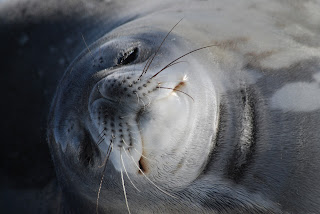