Got up at nine o’clock and at ten thirty Jeremy and I left for a day run out west to Low Tongue and Forbes Glacier in a stiff twenty knot Katabatic wind. The sea ice surface was perfect, smooth and very little stastrugi. We followed the sea ice cliffs all the way and the scenery was just magnificent. The glaciers are just out of this world. The ice is so blue and all crumbly like honey comb and is in so many weird and wonderful shapes and you never get sick of looking at it. A lot of it is carrying moraine and large rocks. There are many places where recent collapses have occurred and some placed just seem to defy gravity and could come down at any time. 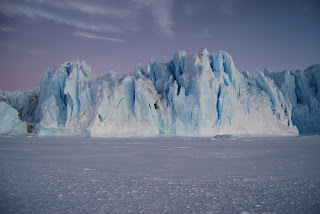 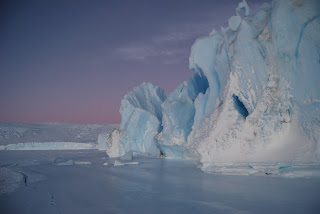 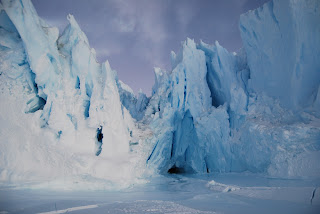 There are caves all throughout the cliffs, some very deep and others have stalactites. The sea ice was so smooth we could travel at a good speed looking out for the many tide cracks and other hazards. We came across a lone emperor penguin in the middle of nowhere that must be lost? Eventually we navigated our way to Low Tongue depot where we have a fuel cache. The whole area here is a nesting colony for Adelie penguins and there were nests, bird shit, feathers and dead penguins everywhere. The rocks here are totally different to those at Mawson and contain a lot of garnet. 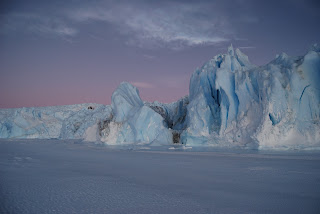 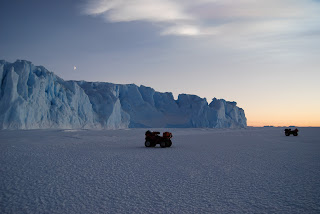 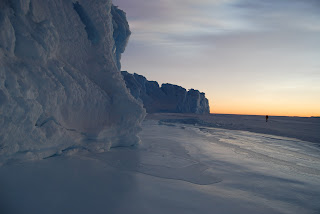 After a good climb around we had a break for a warm drink and a quick bite before starting the journey back to Mawson. For the whole day the sun barely got up above the horizon and I wanted to make sure we got back before it got too dark. On the way back we saw quite a few seal holes and also came across a group of three emperor penguin just wandering around. Once again the scenery on the way back was just stunning. 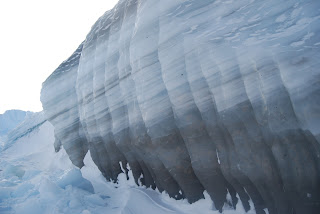 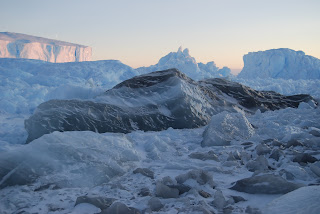 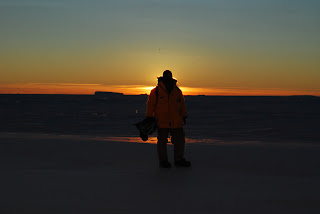 At one point I rode over some fresh ice near a tide crack and to my horror I broke through and water splashed everywhere as I came to a complete halt. I thought I was going down and my heart was pounding. I applied power and rode strait out back up onto the hard ice. What happens is when the tide comes in the water pressure causes cracks and sea water will push through and pool until it freezes and I had broken through the thin refrozen ice into a 200mm deep pool of sea water below. Often these areas are hard to see as they are covered in snow. We got back to Mawson right on dusk, cold and ready for a hot shower but it was one of my best days down here so far. 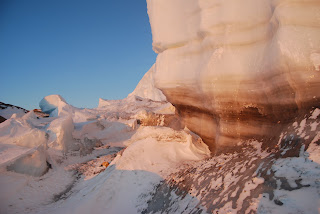 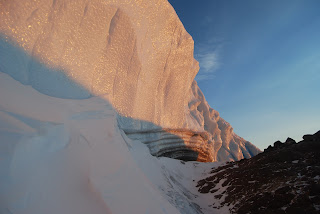 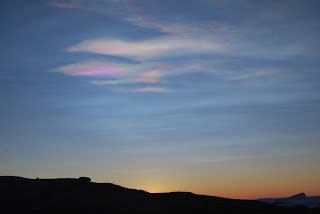 Their movement is west to east. Formation occurs from mid-June to mid-October. Two types of Polar Stratospheric cloud can occasionally be observed from Antarctica.Type I are thin layer clouds made up of small droplets of nitric and sulphuric acid and will form in temperatures colder than – 75 degrees C. They appear as a thin yellowish veil with fine horizontal structure and a bright spot a few degrees above the horizon scattering light from the sun. Orange haze above the horizon indicates scattering from nitric acid particles. Type II Nacreous Clouds or Mother of Pearl clouds and are made up of ice crystals below -83 degrees C. They have a pearly-white appearance due to scattering of sunlight and may show delicate interference patterns and pink and green colours.

They are best observed when the sun is between 1 and 6 degrees below the horizon during civil twilight. At that time the lower troposphere is in shadow while the stratosphere is still lit by the sun.

So what is the connection with stratospheric clouds and ozone depletion?

Each winter a polar vortex forms in the stratosphere over the Antarctic. The polar vortex is a region where air undergoes little mixing with the rest of the atmosphere, allowing temperatures to drop to around -85ºC and stay low. This occurs when there is no sunshine in the winter months during the polar night. The low temperatures allow water and other chemicals to condense, producing stratospheric clouds.

The polar stratospheric ice clouds provide a surface on which chemical reactions take place that lead to ozone depletion. Compounds called HALO CARBONS are converted to compounds that will catalytically destroy ozone. In spring when the sunlight returns to Antarctica, the destruction of ozone within the polar vortex starts and rapidly accelerates. The thinning of the layer of ozone is what is referred to as the ozone hole. It reaches a maximum in early October and slowly declines so that things have returned to normal by the end of December.

The ozone depleting compounds contain combinations of the elements chlorine, fluorine, bromine, carbon and hydrogen. The general term for them is HALO CARBONS. Compounds that contain only carbon, chlorine and fluorine are called CHLOROFLUOROCARBONS (CFC). Compounds that contain carbon, bromine, fluorine (and sometimes chlorine) are called HALONS. From the surface stratospheric clouds seem to be stationary however wind speed can be strong. On 26th June 2011 speeds were up to 180 km/h 25km high. 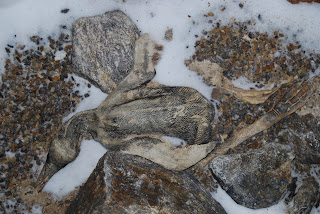 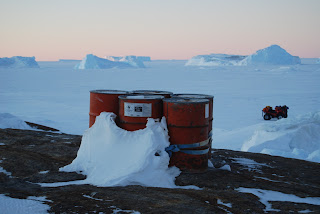