I woke to a calm windless day, wow; it’s amazing how this can lift your spirit. With mid-winters day coming up on Friday everyone is starting to get things organised and plan the event. We have been digging a snow cave for a few days now that we plan on spending after dinner drinks in. It’s coming along real well and it’s a credit to Keldyn and Jeremy. I plan on sleeping out in it at some stage and we will also have Friday nights pizza and drinks in there as well. With a raging fifty knot wind blowing outside it is barely audible inside the snow cave and the minus twenty cold outside is insulated to a comfortable minus five inside.

Today I worked very hard once again and completed several tasks off my monthly list to get a few points on the score board after last month’s disasters. I finished off a few last remaining jobs on the 1kW amplifier and commissioned both of them with some on air testing. With help from the engineers in Kingston I managed to get the 2 x MFD printers / scanners in the ops building and red shed complete, so finally we can scan to email and print in colour. I also got the one in red dwarf (Trades building) lifted into place so Pepe can set it up ready to be programmed.

After lunch I took the green Hag out to fix one of our HF receiver open wire feeders up on the dog line that snapped during a blizzard. I needed the Hag to carry a couple of turfers, some heavy tools and a ladder. I had been waiting for ages for the weather to fine up to get this job completed and I was now racing to get it done before it got too dark. You don’t see much open wire feeders these days with only the military and a few government departments which still have large HF installations still using it in preference to coaxial cable. It is very simple to install and maintain and virtually loss less over large runs and static from blizzards is cancelled out. On the down side if you don’t have an appreciation for telecoms it can be considered to be an eye sore on the landscape, but if we didn’t use open feeder we would still have to use above ground cable tray to support coaxial cables any way. Personally I like the heritage look of a telegraph line. After the telegraph line was repaired I went to help John smooth and seal the ceiling of the snow cave with a blow torch and set up a polar pyramid tent outside the cave entrance. Later it was back to the office to catch up on all my emails. 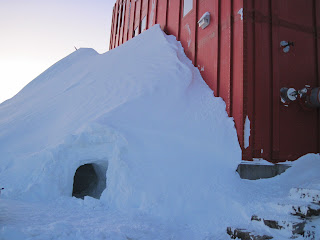 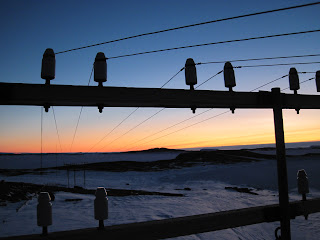 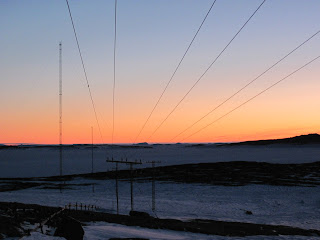