We got up around eight and the temperature was minus twenty four. After breakfast we headed off to the nearby wind scour which was very impressive after a long hard walk down a steep ice slope. From here we travelled in a clockwise direction around the David range hoping to check out some more wind scours as we went. This turned out to be impossible as they were so deep and steep it could only be achieved using ropes and they were just too dangerous. 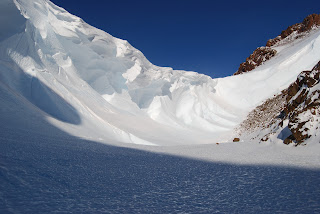 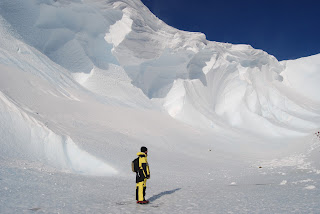 Trent in the wind scour near Fang hut
﻿
We continued on and rounded Mt Coates to traverse the western side of the range. We drove through some nasty crevasses and then pulled up at a nearby wind scour for a look. We could only walk in a short distance when it stopped at a cliff. Darron and I climbed down while Trent stayed back near the Hag. The scour was very impressive and went a long way and Darron suggested we keep walking and hopefully we will get back to where we started. (Bad move) We walked a long way and Darron decided to walk high up on a ridge to see where we were. He made hand signals for me to keep going and off I went down this long ice slope. I crossed a large ice ridge and on the way down my micro spikes let go and off I went sliding down the ice slope. I figured it was easier and quicker than walking so I curled up in a ball and went as far as I could. Still being directed by Darron high up on the ridge I walked through deep snow and rounded the hill on the plateau side hoping to see the Hag. Not so, this led me into another very impressive wind scour. I started to walk in and immediately one leg fell deep into a crevasse. Oh shit, no problem, I tippy toed around some crevasses and continued to walk up the wind scour till it ended in an ice cliff. (Bummer) I had three choices, go all the way back, climb up the steep rock cliff or scale the ice cliff. 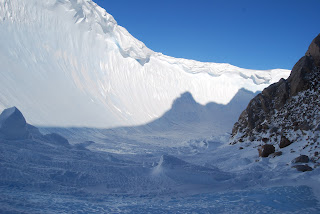 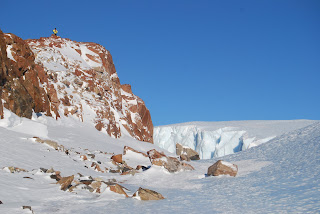 Darron giving directions from high up 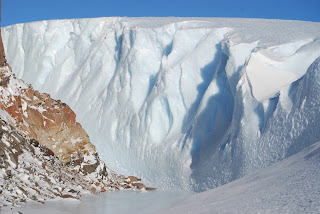 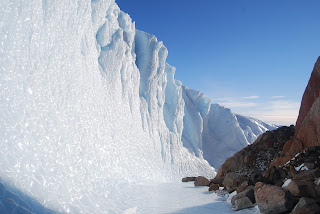 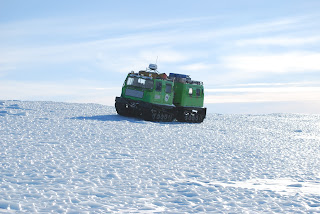 I finally made it back to the Hag

I first had a go at the ice cliff, but without ice axes it was impossible, so then I attempted to climb the rock cliff. I got three quarters of the way up and decided to abandon my attempt as the rock was too loose and dangerous, so I turned my attention back to the ice cliff once again. I hacked steps in the snow on an angle all the way to the top but the ice was so slippery it was almost impossible to get any hand holds to pull myself up and over the edge. Using my micro spikes, I pushed my way closer to the edge and using all my effort and to Darron’s amazement; I managed to get my fat arse up and over the edge to the slippery surface above where I collapsed in a heap to recover. No sweat, now just a short stroll back to the Hag while Darron has to walk all the way back across the upper ridge and down the rocky slope. 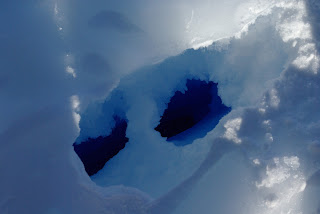 The crevasse Darron fell into

When Darron got back to the Hag we were talking about the dramas of the past hour when he stepped and his leg fell deep into a crevasse exposing a bottomless view right next to my door of the Hag. How the hell did I get out and not fall into this crevasse? Anyway, I just seem to be lucky. We got the hell out of this mine field and headed down the western moraine line. Ice acts just like water in slow motion and all the fallen rocks get carried down moraine lines and eventually they sink into the ice due to heating from photons from the sun. These rocks can travel thousands of miles and eventually drop out in glaciers or into the sea from ice bergs. Some of the large rocks are amazing how they melt the ice and snow around them and everywhere in the ice are circles where huge rocks or tiny pebbles have sunk down. 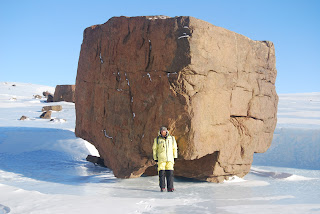 Me and a huge rock slowly sinking into the ice 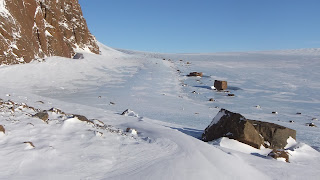 Travelling down the moraine line 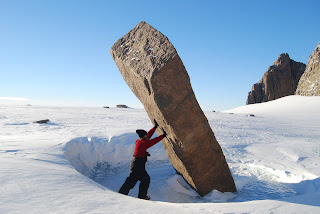 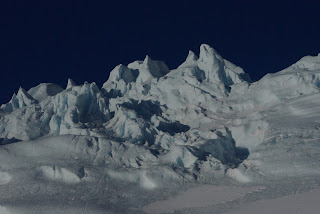 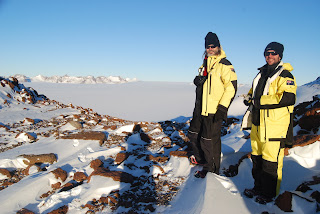 There is always time for one last climb before heading off. Darron & Trent enjoying the view 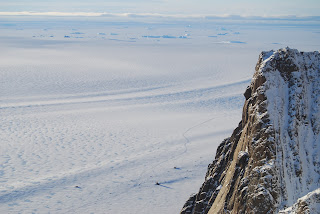 The view back to the coast. Can you see my rock?
﻿
We stopped at several places along the moraine line to take photos of rocks and interesting formations in the ice before heading off back to Mawson. I was so tired I fell asleep in the Hag on the way back even with all the near death experiences smashing through the sastrugi. We got back to Mawson about six o’clock and all very tired. We missed dinner with the others, but I managed to have a few social drinks with the guys before crashing out. 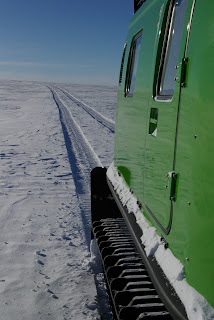 Time to head for home 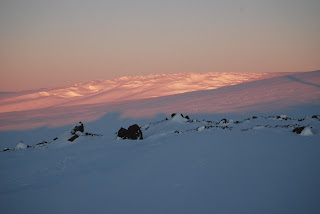 The sun was just setting as we rolled into Mawson
﻿