This morning the 80 knot blizzard was still raging outside so I rolled over and went back to sleep for another nice sleep in. Later after a shower I spent a few hours catching up on my Blog. If we have a bad blizzard on a work day then it’s up to the individual if you want to brave it and go outside or go to work. The dieso’s might go to work inside their work shop, but most of us catch up on work on the computer which we can do from our rooms instead of making the arduous trip down to the office and taking the risk you might get trapped there for a while if the wind increases.

At first I found it quite scary in 70 – 80 knots but I am getting quite used to it now even in the dark, but when the wind speed reaches your body weight you can no longer stand and the wind starts to blow you off your feet and at that point things become very dangerous. I need to either run a new bliz line or move an existing one that is buried in a large bliz trail and then I will have a line all the way from the red shed to the transmitter hut where I am spending a lot of my leisure time.

Even after just one day being blizzed in some guy’s start getting cabin fever. Thant’s because they have no hobbies or interests and spend all their spare time playing darts. Personally I love being blizzed in as it gives me time to relax and to catch up on all the little things that need doing. It has been a while since I have been able to go off station though and I think the next weekend we have fine weather everybody will be wanting to head out and that is part of the reason I have been working furiously to complete the Hag’s. As it gets colder everyone is going to want to take a Hag out rather than a quad bike. Also we need to get a search & rescue (SAR) Hag setup ASAP.

We also get hassled out by schools, stamp collectors, marriage proposal sign requests, radio stations and all sorts of other weird stuff you don’t even want to know about. Anyway, for the time being it’s nice to have my fifteen minutes of fame.

Tonight we had a lovely three course French meal. I would have to Google what half the stuff was but I have to say it was a culinary delight. After our usual lengthy chats at the dinner table we migrated up stairs but once again most people vanished into their own little worlds and it was a rather early night.

Half of the guy’s play repetitive darts over and over and I find this very boring. I like a game of pool or a good movie or even a music documentary or something playing on the bar screen while you chat and share a beer but most of the guys are off doing their own thing in their rooms or somewhere. (Like me now) I watched an awesome documentary called “Who killed the electric car”. Well worth watching to see how the oil companies and government conspired together to remove electric vehicles off the market. 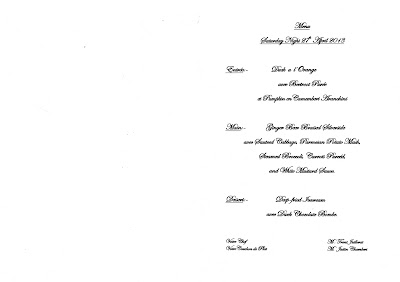