Last night there was another great display of auroras all night and some of us got some great photos braving the minus twenty eight degree temperature.

We had another great day of helicopter operations yesterday with 30 flights conducted which resulted in another 24,159kg of cargo taken ashore. We also back loaded another 4,866kg of cargo from Mawson.

This morning we have started helicopter operations again, and today will be our final day of operations. The first flight from the Aurora Australis saw the last item of Mawson cargo transferred ashore, which means we have been able to fully discharge all the Mawson cargo that was loaded onto the vessel. We are currently back loading the last RTA cargo from Mawson, as well as bringing back to the ship the remaining ground support personnel that are on station. Once that is complete we will conduct an ice reconnaissance using the helicopters, which will not only let us determine the condition of the ice we need to get back through, but also pinpoint the best course for the ship to take through the ice.

Radio propagation today was quite lousy, but I did manage to contact two stations in Namibia.

By mid-afternoon we had all the helicopters safely stowed in the hanger, and the ship then commenced to turn around and to start breaking its way out of the fast ice so we can get on our way back to Hobart. I spent hours out on deck in minus twenty four watching in amazement as the ship repeatedly rammed full steam ahead into the one meter thick fast ice smashing it to pieces like huge chunks of Styrofoam cracking and exploding under the huge pressure. The massive prop wash shooting out the back of the ship looked like rapids in a raging river. It took over two hours just to turn around and to start with it was really slow going, but eventually the speed increased slowly until we were doing about eight knots and there was ice smashing in all directions. It was a rough ride and very noisy as you could imagine but gradually the ice thinned and by the evening we were gliding through the ice at over twelve knots.

At eight o’clock we watched an amazing documentary about the Americans raising a Russian submarine during the cold war and later I worked on my blog until late.

Around eleven o’clock we entered the pack ice with lots of banging and hard jarring. I went into the bridge to see what was going on and I stayed a while watching the large chunky pack ice illuminated by the three huge spotlights as the fairy dust sparkled in the light beams. A short while later the master decided it was safer to park up for the night and to navigate his way out during daylight so I retired to my chilly cabin to read my book for a while. 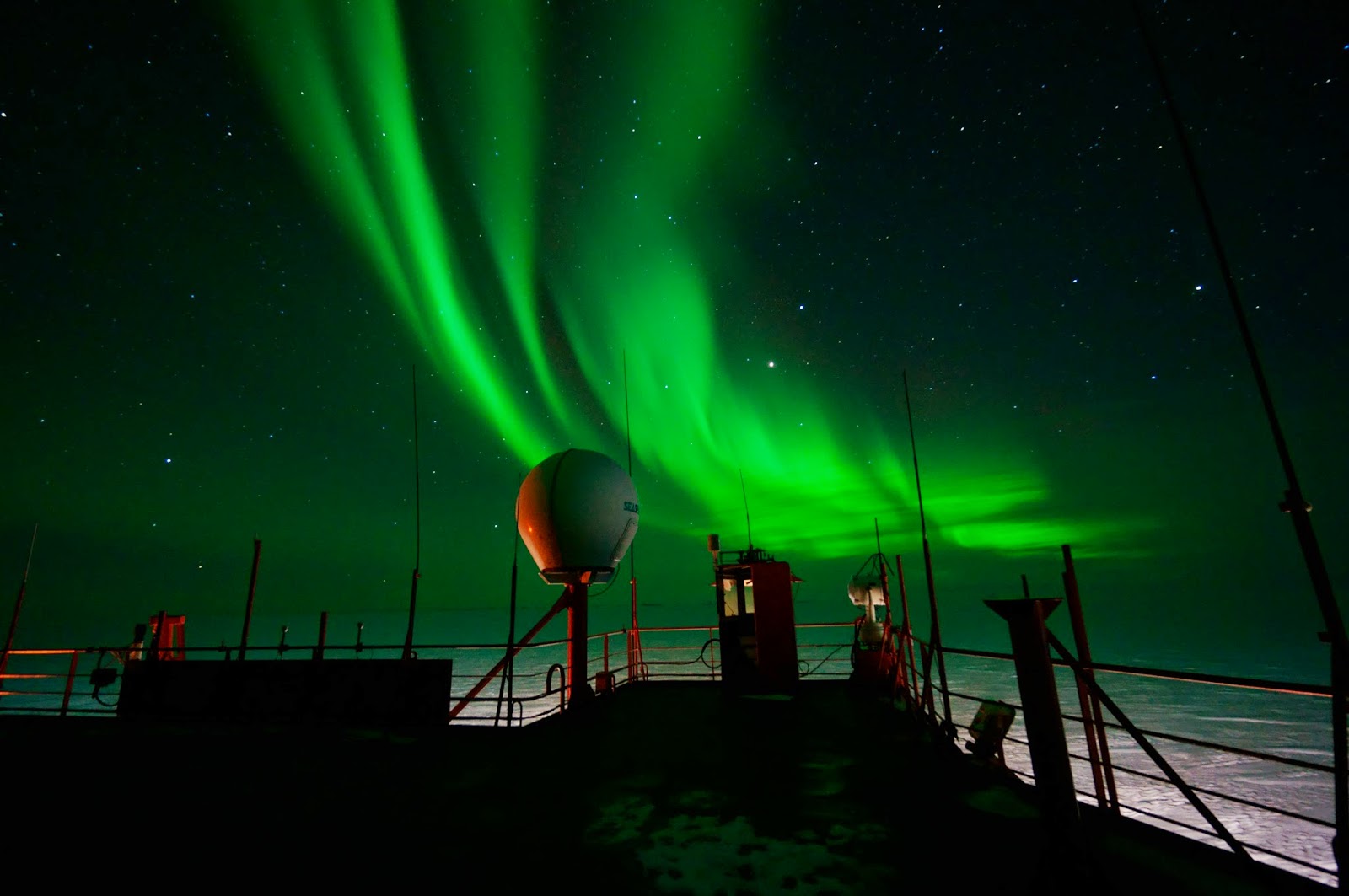 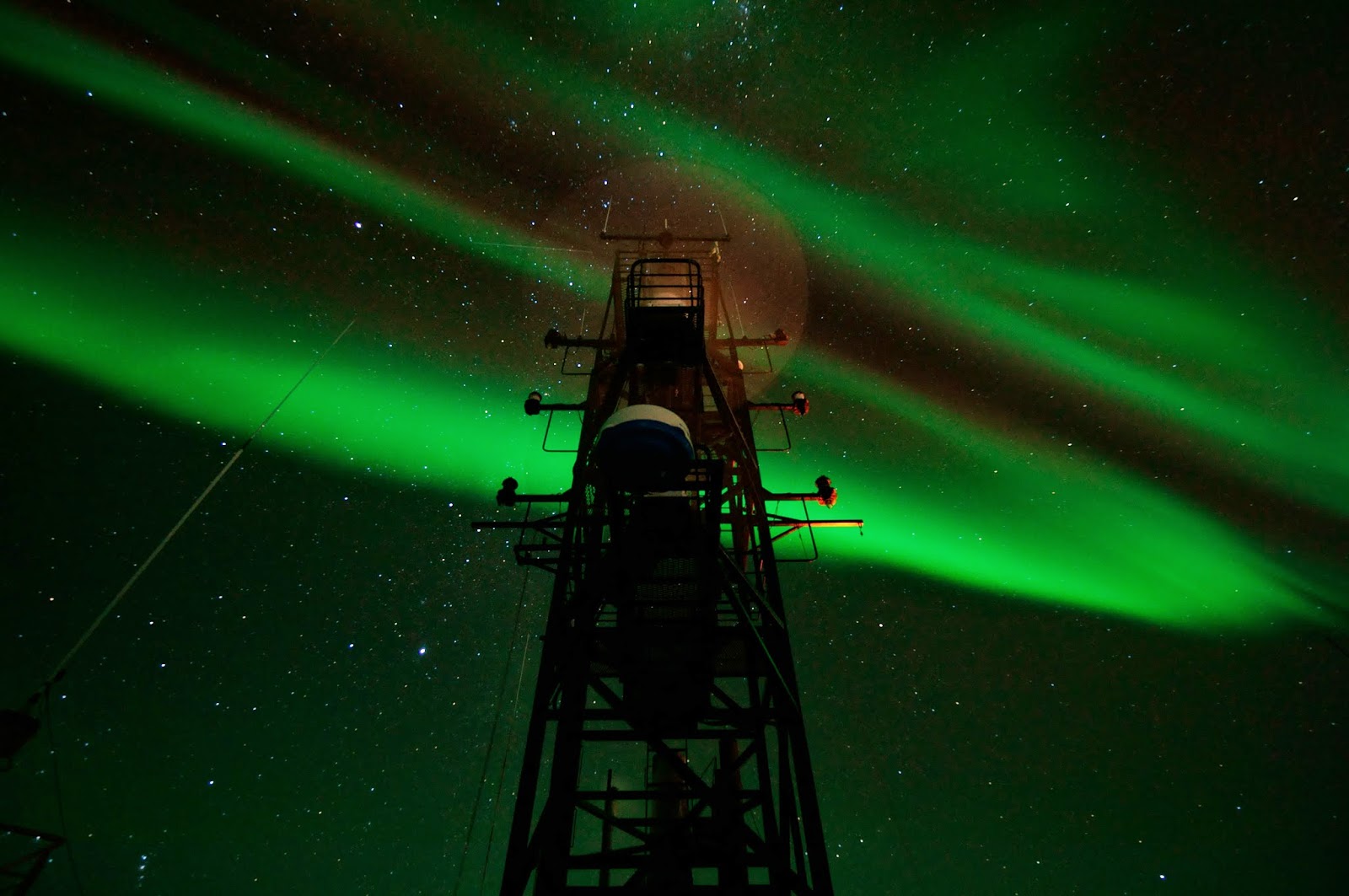 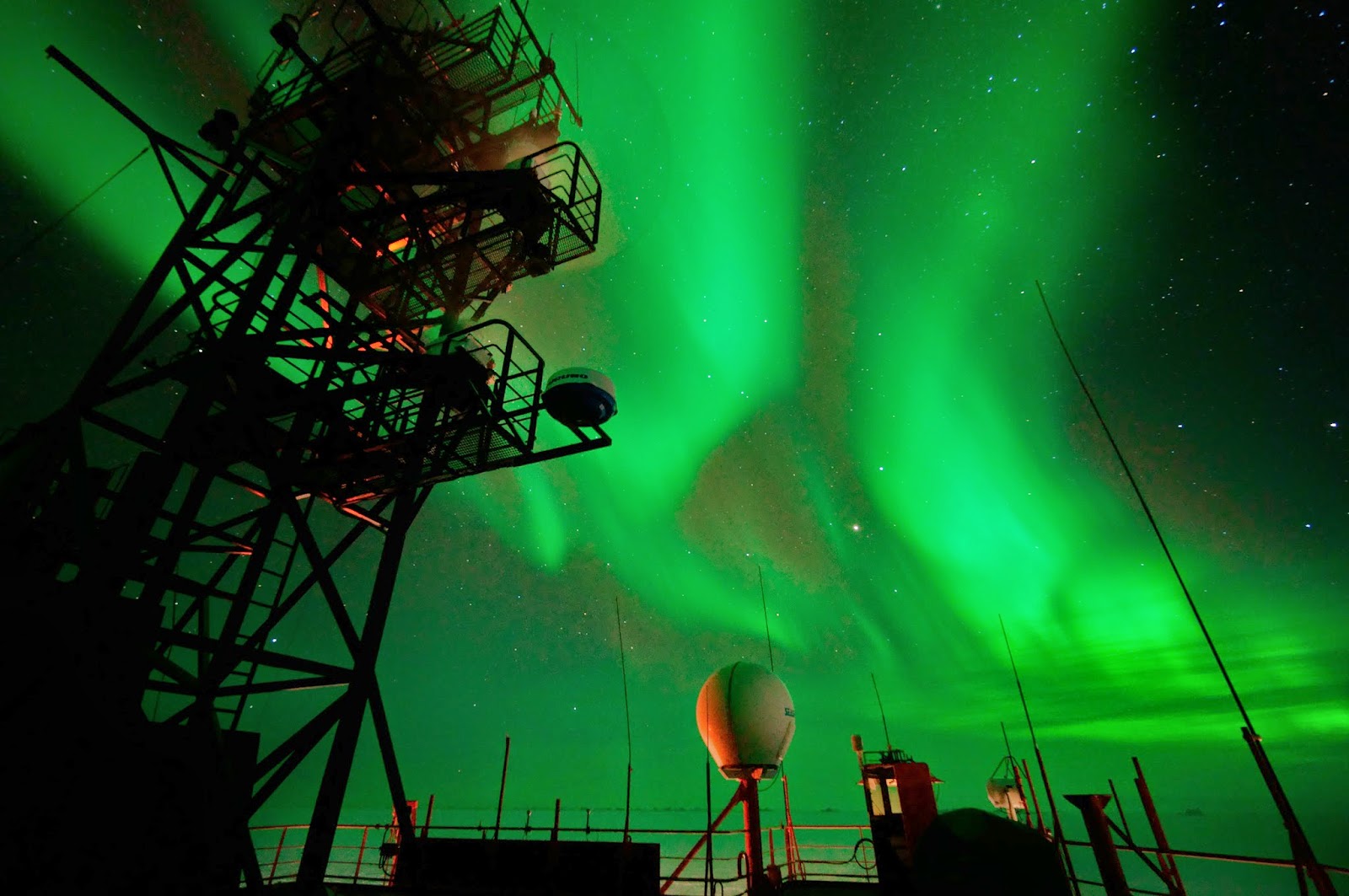 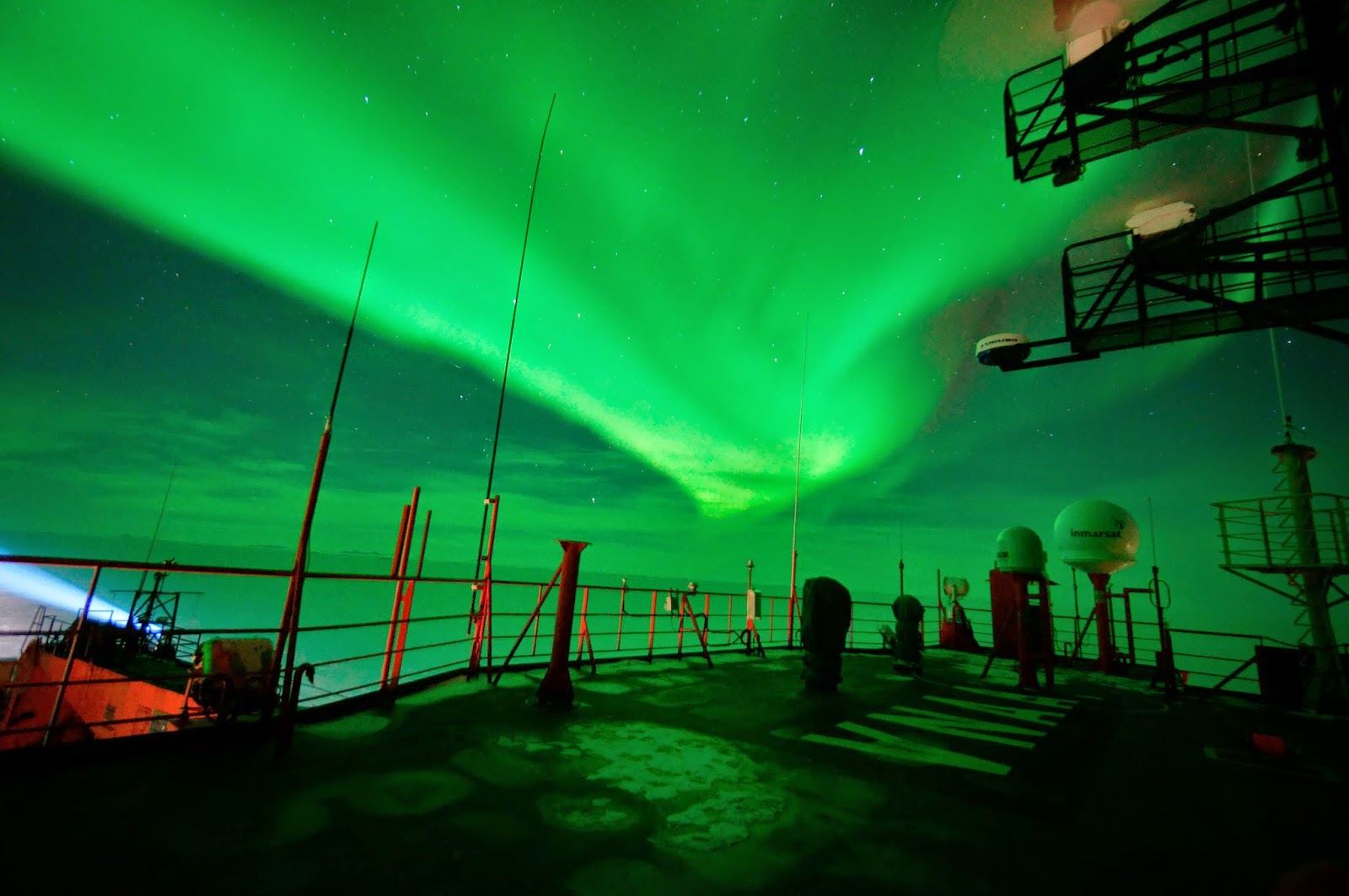 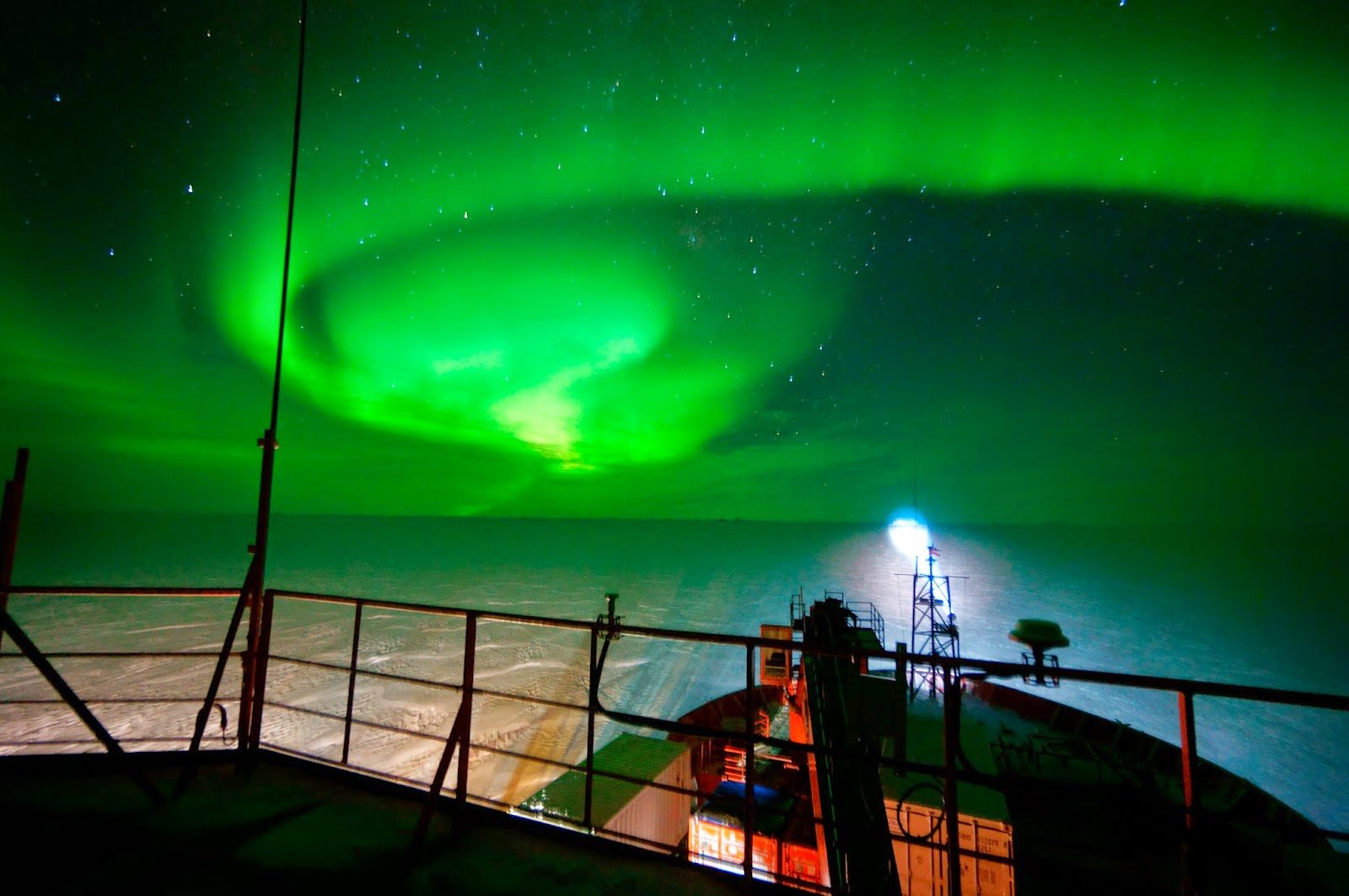 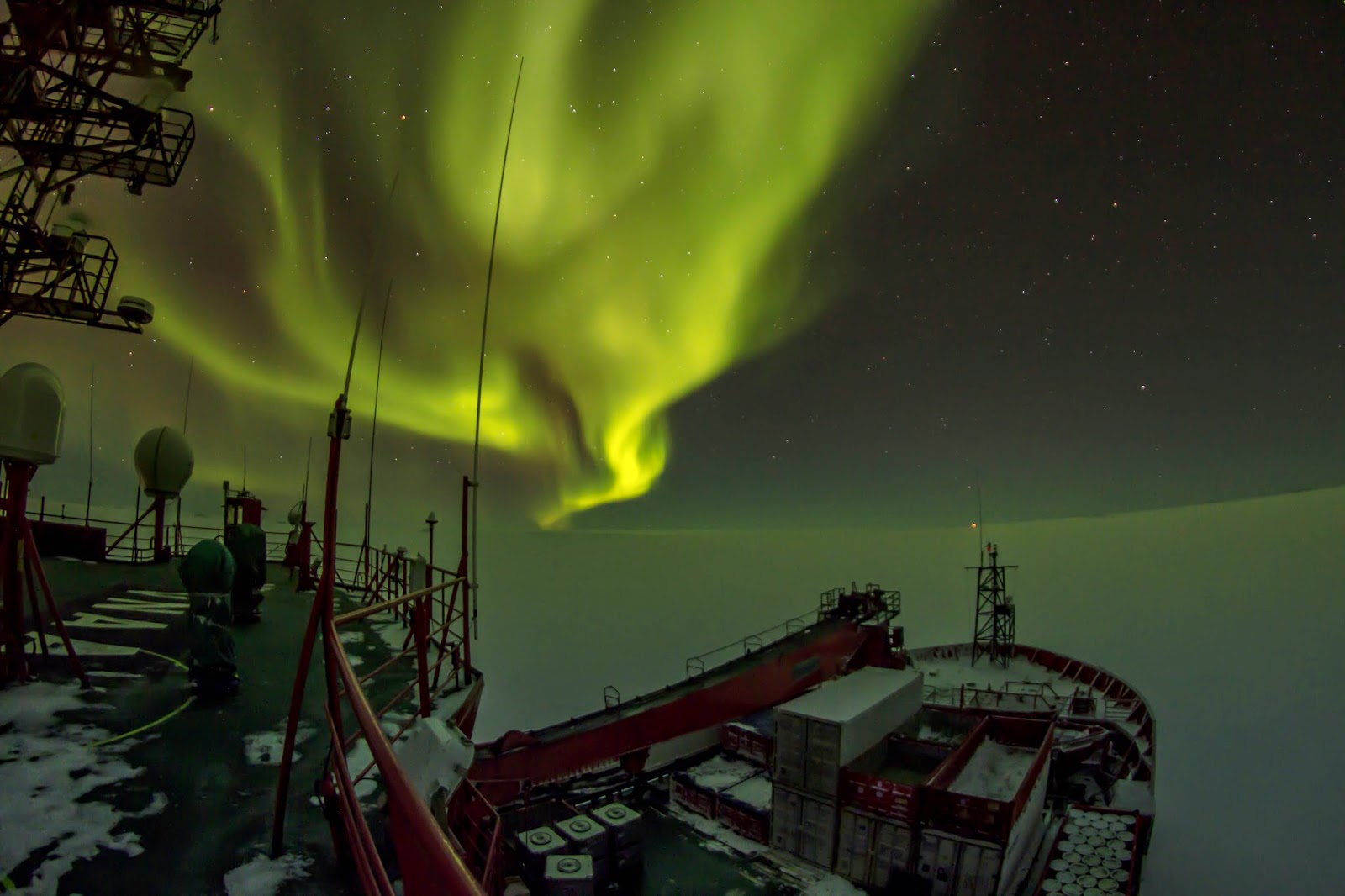 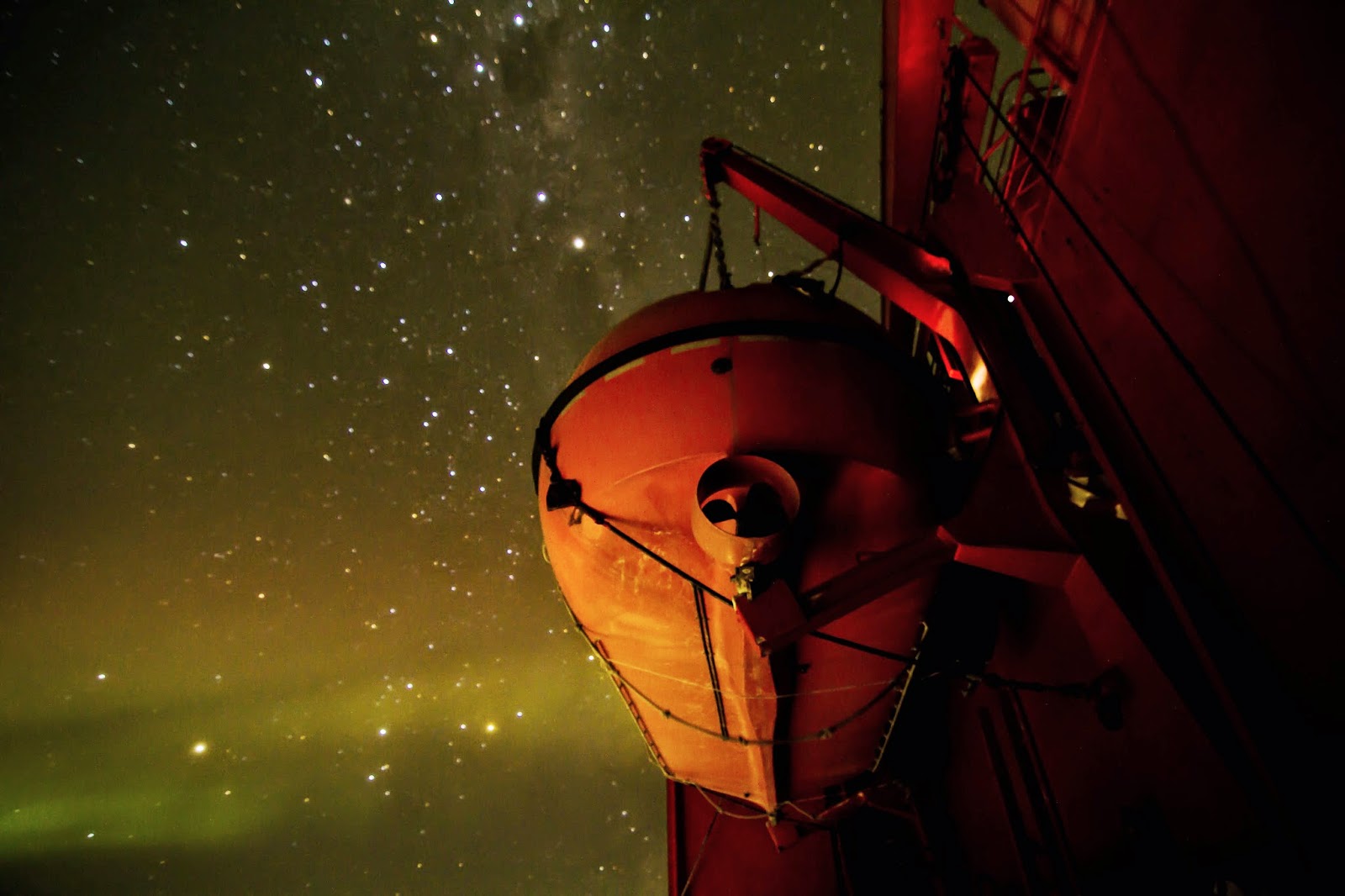 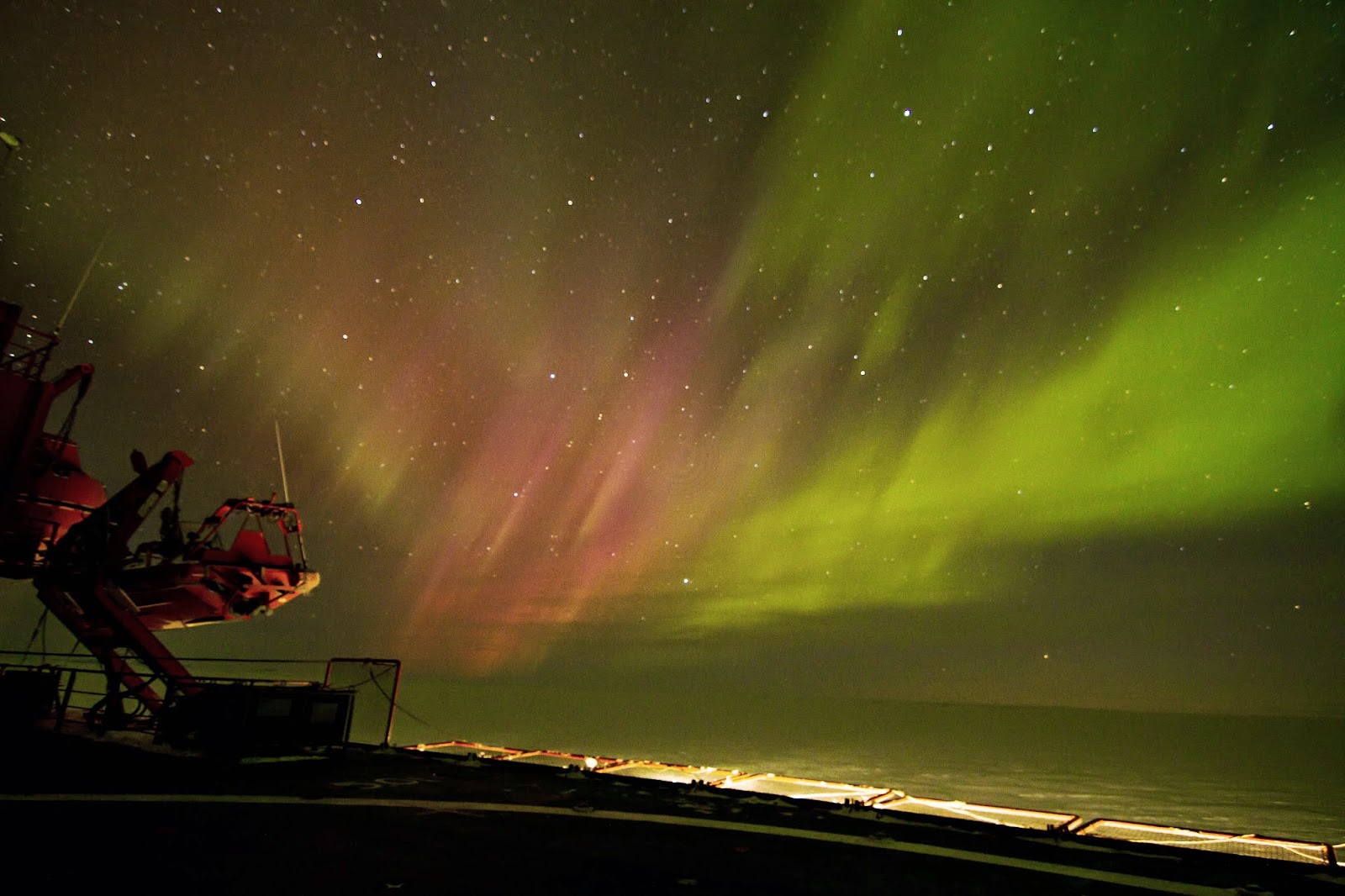 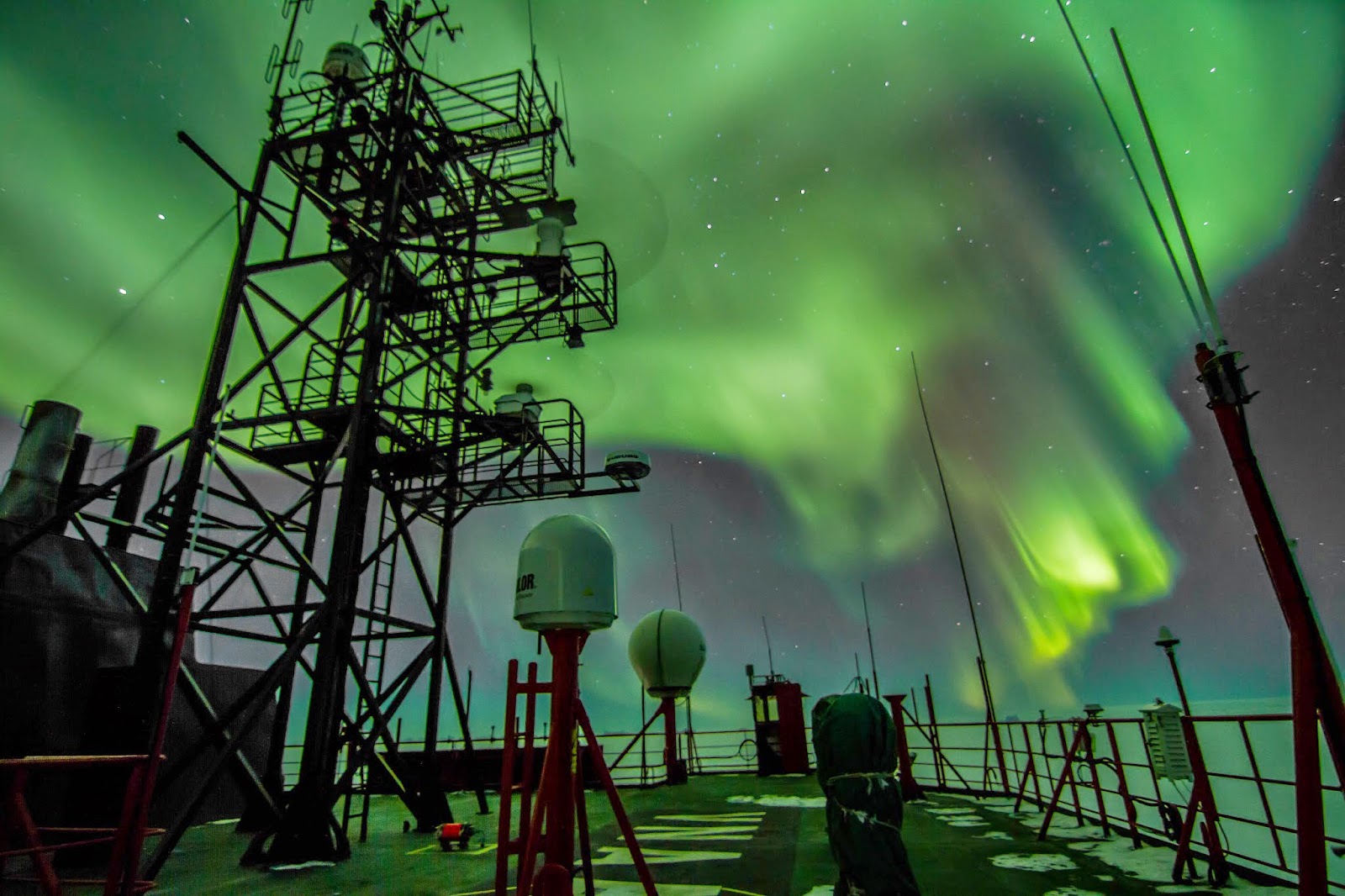 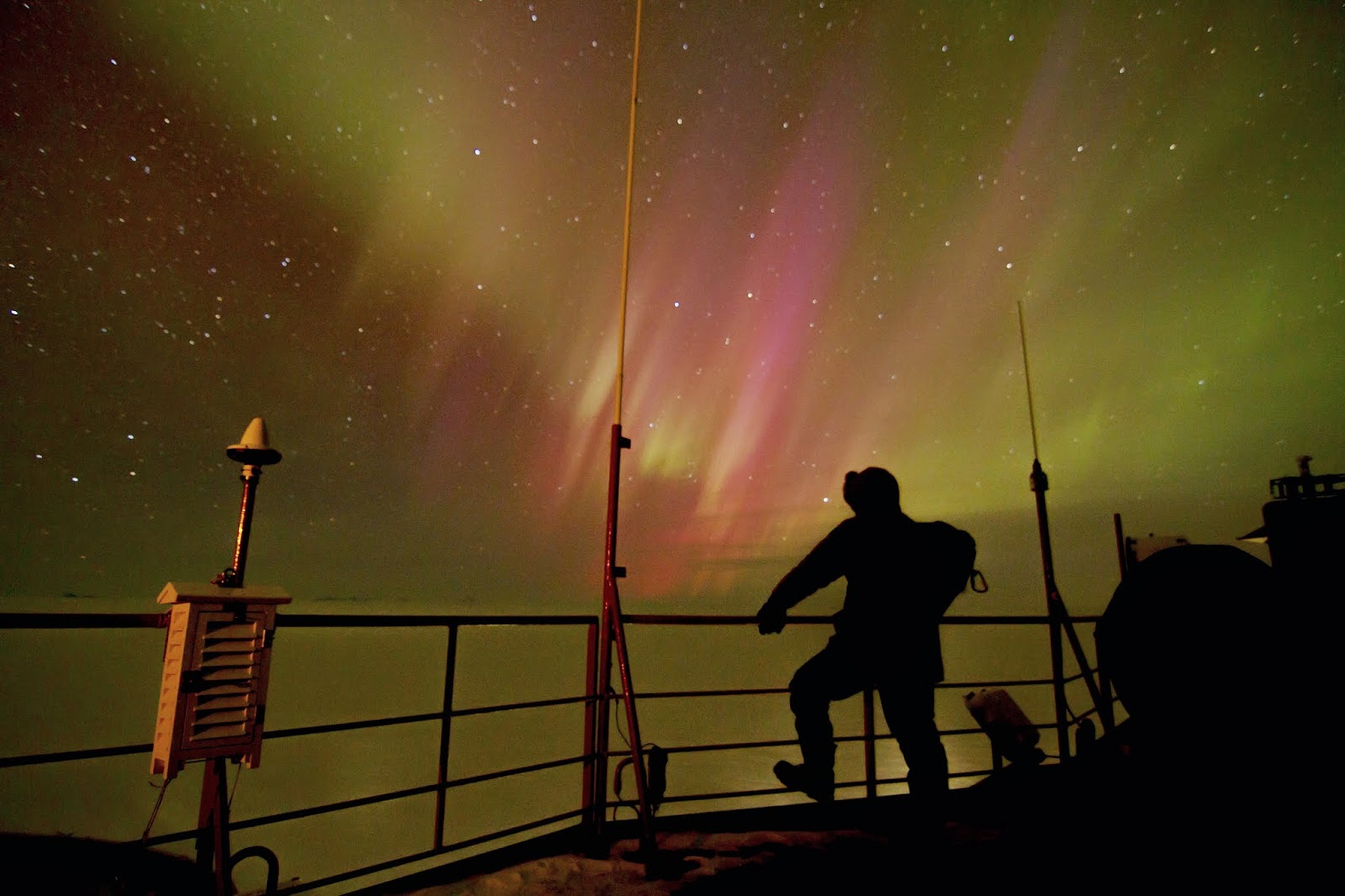