The blizzard was still raging this morning and I had to cancel the EME sked I had planned for 3pm. After doing the ARPANSA filter change I decided to fix my 40vdc 25 Amp power supply. I changed a resistor and a pot that were out of tolerance and managed to get it working under a light load of 1.5 Amps, but when I increased the load the regulator would shut down. It appeared to be suffering from parasitic oscillations but why only now had me buggered.

The four transistors all measured good and I couldn't find any other faulty component. We don’t have any spare transistors of this type down here so there is not a lot I can do. Chris had a look and it had him buggered also. Eventually I ran out of time and had to put it aside for another day. I might try probing around and trying to find out where the oscillations are being generated from and try hanging a few decoupling capacitors around to see if I can improve or fix it. Tonight we had Mexican for dinner and latter on eight of us played this murder mystery game and I was the only one not to dress up as I was really tired and not really up for it but it turned out to be a fun night. 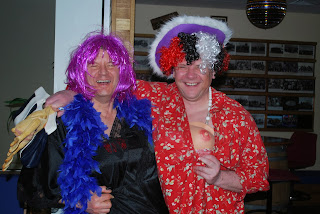 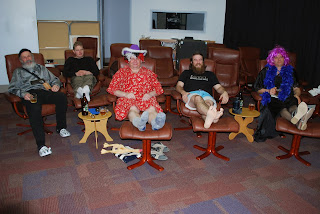 Does this look normal to you?
Posted by Craig Hayhow at 12:06