Today when I woke up the sun was shining and the blizzard was finally over after eight days blowing over 50 knots !! After a coffee and breakfast I went for a long walk taking some photos around the station. It was so nice to feel the warm sun on your face once again and it was such a pleasure to walk around without and wind. These days at -12c I just wear a T-shirt under my half open jacket as I get too hot otherwise. When I get home in March it will probably still be 40c and I might have lay down in the chest freezer to stay cool.


The Blizzard made some huge bliz trails which Jeremy spent all day clearing with the loader, but it also blew so much snow away with its sand blasting effect, so now there are huge areas of bare rock exposed. The blizzard also blew down one of the wooded support poles for the IPS receive antenna array.

Eventually I ended up in the radio shack and spent a couple of hours on air before going back to the red shed for lunch. Late in the afternoon I went back to the shack for a couple more hours as conditions were so good before retiring back to the red shed for the fancy Saturday dinner. The menu was haggis for on tray and wallaby & baby chicken for the main course. After dinner in the cinema I watched an IMAX documentary on the Hubble space telescope and then I found this very old 1969 Leyland brother’s movie where they drove a 6m diesel powered open boat from Darwin to Sydney. It was a typical amateur Leyland brother’s film, but an extraordinary effort that would still be considered extraordinary even today.

They were so inexperienced and ill-equipped and it’s amazing none of them was taken by a crock, but what an adventure. After five months in a small boat getting sun burnt, bashed about, soaking wet and freezing cold I can understand why they sold the boat and bought four wheel drives. After this I was joined by Darron and Pete C to watch a movie called Bitch Slap. 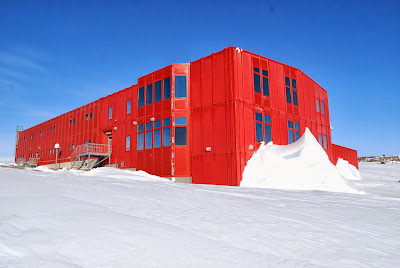