It got a bit rough in the night with the odd thunderstorm pelting us with hail and confused seas. Every time the ship smashes into a big wave it sends shock waves through the whole hull vibrating and shuddering up and down till the energy is dissipated. My yacht does the same on a much smaller scale. When I woke this morning and looked out my porthole I was amazed to see an almost glassy calm southern ocean. I don’t think it could get much better than this. Sooner or later it’s got to show us who’s the boss. I was cold in the night and had to put on a T-shirt. The temperature this morning is 3.5 degree and the wind is only 2 knots. At breakfast Keldyn was wearing his thermals and over that a pair of soccer shorts and a soccer top and a baseball cap, what a fashion statement.

I’ve developed a taste for tined spaghetti. I haven’t eaten that shit since I was poor and at RMIT, but I can see why three year olds rave about the stuff. I’ve also figured out how to work the 1980’s cuppachino machine and getting quite good results even WITHOUT a milk frothing machine. Today I’m putting aside my coming home cloths so I don’t look like Robyn Caruso when I step off the ship as most of my clothes will look like rags by then. On Sunday I’m going to show some old films and photos of Mawson in the cinema to anyone interested. Someone (Keldyn) wrote on the notice board I was giving a demonstration on tail wagging for sore backs. Let me explain; during the manual handling course I asked a question to the slim attractive female presenter if she could show us some exercises for sore lower backs. She said the best exercises for lower backs is tail wagging and she got down on all four’s in front of 15 men and proceeded to tail wag in a very sexy manner (well it was to us, she was being VERY serious) and everybody nearly fell off their chairs. When she finished I couldn’t help but ask if she could demonstrate the exercise one more time and every one pissed then selves and I’ve been hearing it ever since.

For lunch I had smoked chicken and yes, you guessed it, prawns & salad. I’ve just worked out why these prawns taste so good – their TAX payer’s prawns! Today we deployed the first of 9 CSIRO ARGO float buoys. The CSIRO have already Emailed to say they are receiving data from it. These float buoys are high tech scientific instruments designed to be remotely monitored to retrieve specific data. They sink down to the abyssal depths gathering data and then rise back up to the surface and send their data off via satellites before sinking back down once again. They are all to be deployed during our voyage South at pre-defined latitudes, the first one being at 53 degrees south and the last one at 64 degrees south. The data gleaned from these float buoys will be used to detect and interpret changes in southern ocean circulation as a result of climate change.

In the early hours of the morning the ship passed through the Antarctic Convergence Zone where the sea transitions to a much lower temperature. We are far enough South now where icebergs are possible and the ships spotlights were turned on for the first time last night. ETA for Davis is now 25th January. Dinner tonight was sloppy chops, mashed potato, smoked chicken, vegetables and some pickled octopus. Lloyd the doctor had a bit of a slide show on the customs ships he works on when he’s not in Antarctica which was quite interesting. 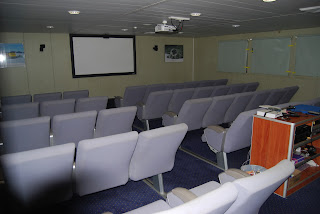 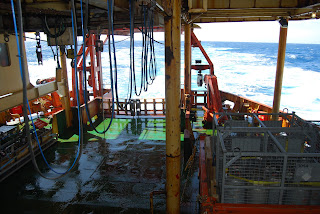 Looking aft at the trawl deck﻿ 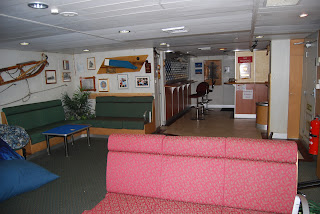 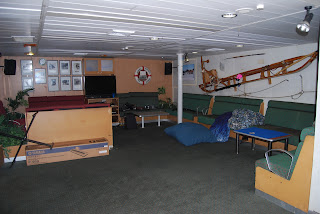