I slept in and just missed breakfast this morning.  At 10:00 we started working on the deployment of the acoustic whale recorder. It took about an hour to assemble and prepare for the drop off the trawl deck. It consists of a 250kg weight at the bottom tethered to an acoustic release by a 5m sling, then another sling connected to abyssal floats and another sling connected to the large cylindrical buoy containing the recording equipment, a tracking radio beacon and a strobe light. Once deployed, it sank a lot faster than the 2m/sec calculated and within ten minutes it was sitting on the bottom at 1700m. I lowered a 12 kHz sonar transducer over the side and was able to communicate with the buoy and do range checks with it. Once communications was established, we then got the ship to move to three different points of a triangle around it to take range readings; along with the GPS coordinates and time we could establish its exact position on the sea bed. This exact position will be used to place the ship as close as possible in twelve months’ time and once again the same 12 kHz sonar transducer will be lowered over the side and a command will be given to the acoustic release to sever the connection to the weights and the buoy will hopefully float up to the surface and hopefully be retrieved and returned to Kingston for analyses. It was 0 degrees and blowing 30 knots, snowing and the deck awash and by the time I came in I was frozen.


I had twenty minutes to gulp down some lunch before the krill catching meeting. Either tonight or tomorrow night we will trawl for krill to restock the Krill science program back in Kingston. I volunteered to help the krill scientist with the catch and transfer into the krill tanks as I thought it might be something different and maybe interesting. Ten minute break now before the next meeting on the Davis refuelling.


Just for information, while on the ship I have access to a satellite telephone and Email, but I cannot send Emails larger than 50kb, so that is why I can’t post any photos on the blog. I have to Email my blog notes back to Putu in Perth and then she posts them for me. When I get to either Davis or Mawson station and connect to the Internet I will upload photos to each blog post for the last two weeks.
It’s been a busy day. We had a meeting on the re-fuelling procedure for Davis. Normally this is done over the sea ice, but because we are so late in the season the ice has broken out and now the resupply will be done over water, so our fuel line could be as long as four kilometers and quite risky. After the re-fuelling meeting, we had a Mawson meeting to discuss our field training schedule, emergency response training and field leader training and responsibilities. As well as this we discussed the short window for boating at Mawson and various other things. Then it was off to another meeting about transferring to shore via boats. I am on the rosters as a coxswain and I will have my own boat to shuttle people back and forth.
Finally after all these meeting I went up on the bridge for the first time today and was amazed to see we were smashing our way through sea ice. If you think ice bergs are spectacular, wait till you see sea ice, it’s awesome. Huge chunks of ice are smashing and crashing, flipping over and the ship is shuddering and tilting, riding up high and at times coming to a stop. While this is going on, many seals were watching us from ice floes and now and then a penguin would pop out onto the ice, shake its head then shake its bum and wiggle its little flippers while many sea birds gracefully sail the wind overhead. The wind is blowing 35 knots and its minus two degrees, so going out to get some movie footage and photos is quite a challenge as the snow stings your eyes and face and it’s bitterly cold.

I wore my brand new rabbit skin sledging cap and it only lasted about ten seconds before blowing off my head and across the monkey deck. I got to it milliseconds from being blown over the side. From now on I will keep the neck strap clipped up. It’s a great hat that is so warm. Nothing beats real fir for warmth. I bought a sheep skin sledging cap and a couple of synthetic ones as well. You can’t have too many hats down here. We are going to park up in an ice flow for the night as a raging blizzard is smashing Davis right now making it too dodgy to try and anchor up tonight at Davis as we are only about three hours away now. Time now to watch a movie and retire early as today I’m buggered.
@ 13:00 UTC (9pm local)
Speed 1 knots
Heading N
Roll 0 degree
Pitch 0 degree
Depth 200 meters
Water temp -1.75 degree (Salt water freezes at -1.8 degree)
Air temp -1.25 degree
Wind E @ 35 knots
Lon 79.03E & Lat 67.07S 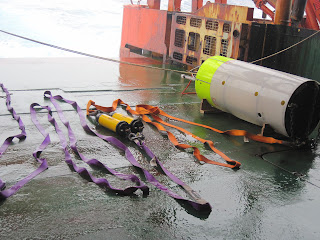 Assembly of the acoustic whale recorder.﻿ 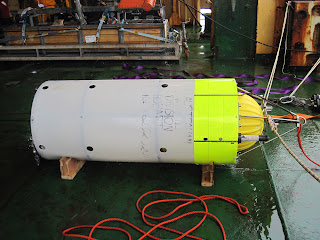 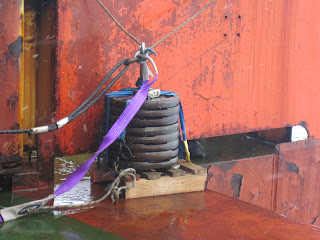 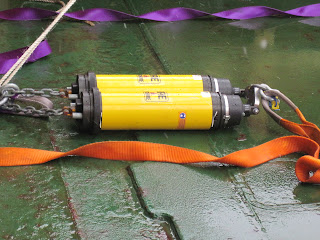 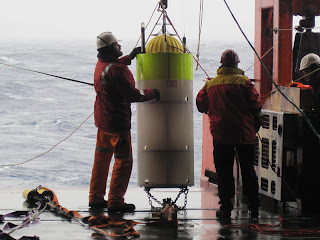 Deployment of the acoustic whale recorder
﻿ 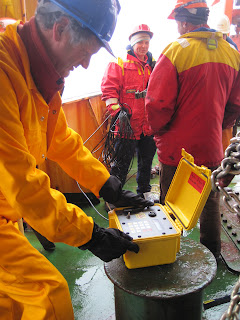 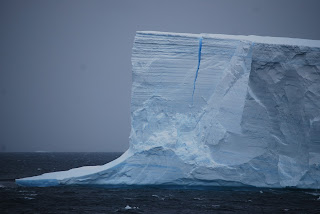