After another long restless night putting up with rock & roll all night my alarm sounded at 06:00 for ice berg watch. Opening the blind revealed a great big sucker right in front of my window. I felt like shit but was excited to get up on the bridge and see what was out there. I wasn’t disappointed; we were surrounded by ice with nine good size reportable bergs within the six nautical mile range ring on the radar. One of them was huge, a big flat topper about two hundred meters wide. We log all these as part of research that has been going on for one hundred years which helps determine how much ice is shedding and how far out it is reaching. After half an hour outside taking photos of the flat topper in one degree Celsius I can now say I am awake and ready to great the world. Sea conditions this morning are superb so it looks like I’ll get to have a two handed shower. It was hard to break away from photographing ice bergs this morning to have lunch as there were so many and all fantastic shapes.  The wind was blowing in the same direction as we were traveling and at the same speed so it was a delight to stand on the bridge roof in only a T-shirt in 2 degrees, photographing bergs while whales breached, the sun was warm and snow flurries sprinkled down on us.


Lunch was marinated Asian style chicken, grilled calamari, rice, pickled octopus, vegetables and salad. After lunch I was quite busy preparing for a training presentation I have to give tomorrow on field communications and procedures. I also had to put the finishing touches to the film presentation on “Old Mawson” I was scheduled to give at 4pm. At 2pm we had field training once again on the use of GPS out on the helideck. Our field training officer John is a really nice guy and there is so much to learn from him. I thought I knew a lot about using a GPS, but Antarctic field navigation is a lot different to sailing a yacht up and down the coast. We all felt like distracted little kids at school with all the ice bergs all around us. I even took my camera so I could sneak the odd picture in while he was looking the other way. It was cold out on the helideck at one degree and most of the guy’s had heavy artic gear on. I don’t seem to feel the cold as much like I used too. At 3pm we had a presentation on the dangers of sea ice which was very informative. This was to teach us how to recognize the different stages of sea ice formation and how to avoid danger and potentially fatal situations from occurring. From late April/May we will be spending a lot of time either riding quad bikes or driving Haglunds out on the sea ice so it’s critical we can read the conditions to avoid disaster. This took us up to my time slot at 4pm.


I started the presentation by telling the name of the two old movies I wanted to play. The first was called “Blue Ice” which was a documentary of the original expedition in 1954, when the site for Mawson Station was selected and the first men went ashore to erect the first buildings, and were left behind to be the first Mawson winter expeditioners.  The second film was called “Expedition South” and was a documentary of the 1960 wintering expedition which my step father Bill Kellas was a member, working for the Bureau of Meteorology as a weather observer.
Bill Kellas is the reason I am here today, as he gave me the inspiration to make the same journey 53 years later.
I continued; in the spring of 1960, during exploration of the Prince Charles Mountains – (At the start of the Lambert glacier) approximately 500kms south west from Mawson, two caravans were setup as a remote weather station and named Binders Base. My step father Bill spent many weeks in isolation living in those caravans with one other Met Observer. He was extracted by a Dakota DC3 aircraft which was latter wrecked in a blizzard at Rum doodle, preventing a fuel drop to the recovery tractor train, and as a result one of the tractor trains had to be abandoned leaving the barge caravan to the elements. In 2003, Dave McCormack found the barge caravan and opened the time capsule. (Dave was sitting in the audience and had no idea of what I was about to show)
Then I told the audience, Bill Kellas died yesterday, and I’d like to dedicate this film show to Bill. He was a GOOD MAN.

Both films went for about 25 minutes each and the 30 odd people were thrilled and amazed, finding them quite interesting. Then I showed five photos of Bill at Mawson and told them he was also famous for taking the first motor bike to Antarctica and showed seven photos of the motorbike out on the sea ice. (Actually the bike belonged to Bills best friend George Creswell and Bill convinced George to smuggle it aboard the ship) Then I showed the old photos of the caravan Bill lived in, in what would have to be one of the most remotest and inhospitable places on Earth. Then I showed the photos of the discovery of that very same caravan forty years later by Dave McCormack. I asked Dave to run through those moments and he described how the sleeping bags were still laid out, and food was still on the table and what an amazing site it was after all those years abandoned to the elements. That caravan is now part of an Antarctic museum display in Tasmania.


It was quite a long presentation, but every body found it fascinating and very interesting and all clapped and thanked me for sharing Bills story with them. Some of the guys came fourth wanting to see the rest of the photos and memorabilia I was given from both Bill and George. I was relieved it went over well and I was able to share some of Bills life with my new friends. And I think Bill would have been proud of me.
When I get to Davis Station around Thursday 24th Jan, hopefully I will be able to get an Internet connection and I will add photos to all these posts during the sail down. We have now crossed four time zones and as I write this post at 22:30 it is bright day light and I can see numerous ice bergs out my port hole. Some are small fragments, some are the size of a house and some are the size of a city block; all are different, some being flat topped while others look like Mt Everest, some smooth and sculptured by the ocean, some blue, some stripped while all of them seem to glow in the most amazing white colour. It really is a site to behold and no matter how many times you see it, you never get sick of it. Sailing is now getting dangerous and we all take turns on ice berg watch. As you can imagine, when the sun finally does go down, it’s like trying to drive through a mine field with the powerful spot lights on. Smacking into even a small growler could cause some serious damage as 9/10ths of an ice berg is below the surface and when you are looking up at a 100m high berg, that’s one hell of a berg underwater.
Had a nice long phone call to both mum & Putu, Iyan, Jade. I hope to call Jack & Sarah tomorrow night.
@ 15:00 UTC (11pm local) 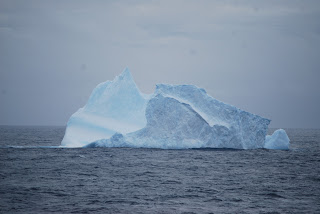 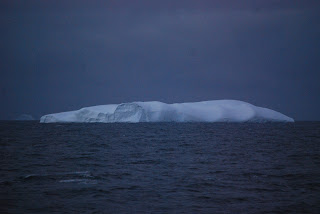 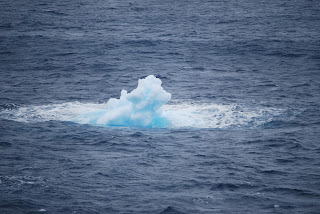 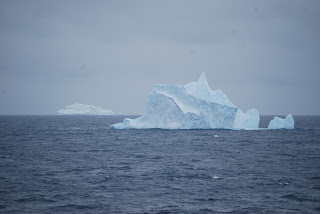 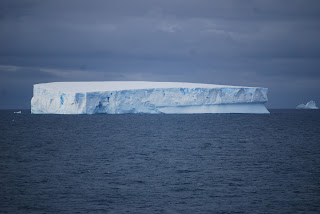