Today we are sheltering in the sea ice as there is a blizzard raging outside and the wind was up to 58 knots last time I looked. There are quite a few crab-eater seals lounging about on the ice. Actually they only eat krill, but they were named by the Norwegians who call krill crabs. These are the most prevalent seals on Earth, because they only live on the sea ice they must have been hard to catch and considering how easy it was to catch land based seals they mostly escaped the eighteenth century slaughter. One thing that amazes me is all the sea birds out here. The snow petrol’s look so fragile and vulnerable but seem to thrive in the icy cold winds, and to think this is summer. I saw two killer whales proposing through the water and also two emperor penguins today.


Some people are starting to develop a bit of cabin fever but I think this is great and I don’t have enough time to do all the things I want to do. I even cleaned the shower and scrubbed the dunny this morning and I’ll put a load of washing on later. I’m already finding out what I really need and what I didn’t need to bring down. I’ve got a meeting to attend for all coxswains now so I have to run. After this meeting we had a Mawson meeting and then a meeting with the voyage leader. The plan is to be anchored at Davis station by 07:30 and to have the jet barge in the water and ready for the first transfer’s at 09:00. At the same time the FRC (Fast water craft) will be launched, the uni-floats will be assembled and the AA2 will be launched and unloading will commence. All this of course is totally dependent on the weather which at the moment is a raging blizzard gusting 56 knots blowing the ship along at 3 knots through the sea ice. We’re off, now steaming through pack ice again.
@ 14:00 UTC (10pm local)
Speed 10 knots
Heading S
Roll 0 degree
Pitch 0 degree
Depth 750 meters
Water temp -1.65 degree (Salt water freezes at -1.8 degree)
Air temp -1.25 degree
Wind NNE @ 30 knots
Lon 78.60E & Lat 67.70S 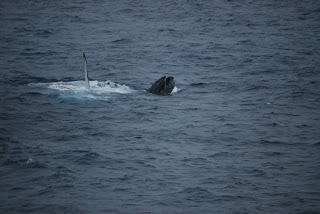 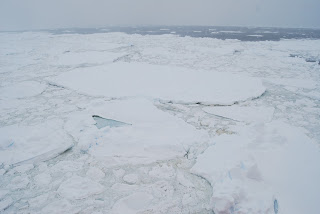 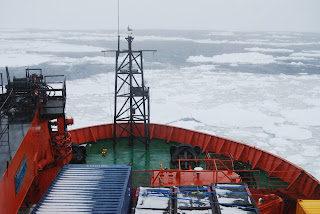 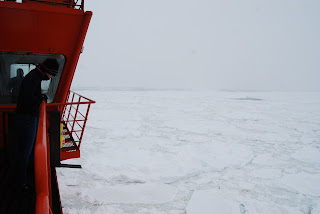 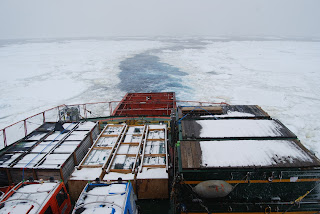 Our trail through the pack ice 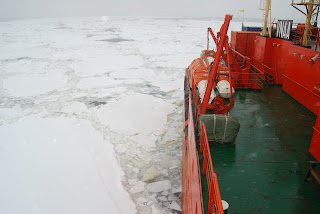 Watching the pack ice crack, crush and tumble is awesome 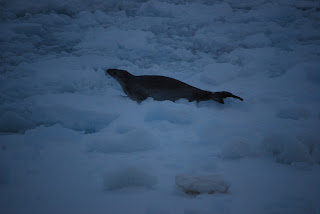 A crab-eater seal resting on the pack ice 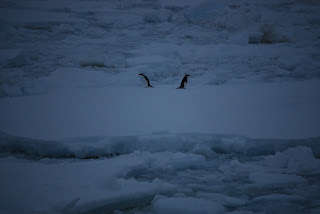 Adelie penguins resting on the pack ice
Posted by Craig Hayhow at 20:37