This morning I awoke to see all the hills covered in snow and I had to get up early as I was rostered on as coxswain on the IRB assisting assembly of the uni-floats and making runs between the ship and shore. I had good fun pushing these huge steal float sections around and into place but it was cold work sitting in one place for five hours and it was snowing on and off.


There were several huge elephant seals in the water near us and two of them were fighting. I was busy watching the work face when two of them swam right under our boat and scared the hell out of me. They were bigger than cars. They make the most revolting noises but are amazing creatures. I saw a skull of one and they have teeth like a tiger. Also in the water were tiny krill swimming around, so I guess that is what all the Adelie penguins are feeding on. When my shift was over I returned to the ship for lunch (Chicken Kiev) and shortly after we unloaded the thirty tonne excavator and placed it on the specially configured assembled uni-float’s I had been working on this morning (This configuration can carry up to 40 tonnes ) and then it was towed into the boat ramp to be driven off. We have one going to Mawson as well and I really hope I get the opportunity to have a go of it sometime as it has always been on my bucket list to operate an excavator.
We are now into our 4thfull day of resupply. Yesterday afternoon we completed the refuelling of Davis and the hose reel and refuelling equipment was then packed away in an orderly fashion ready for deployment at Mawson when we get there.  After delivering the excavator we are now retrieving a 25 tonne crane from Davis. Mobile equipment on station is changed out at regular intervals based on the life cycle of the particular equipment.
Round trip projects on the station are progressing to plan and all are expected to be completed prior to our departure for Mawson.
Whilst the weather remains good for resupply stronger winds to 45 knots are forecasted for tomorrow.  If this is the case resupply activities will be curtailed and the ship may need to move further off shore until the winds abate.
Water temp -0.3 degree
Air temp -2.25 degree
Wind N @ 5 knots
Lon 77.93E & Lat 68.57S 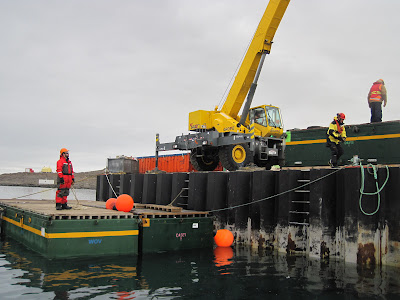 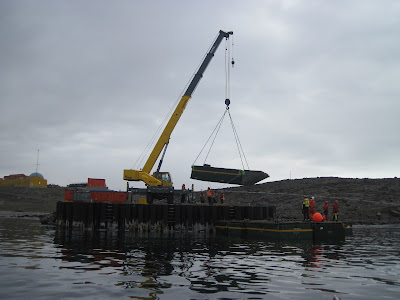 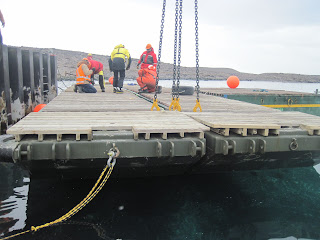 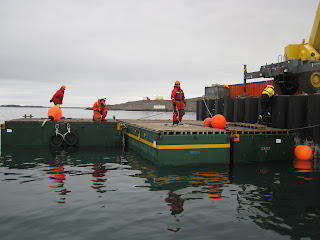 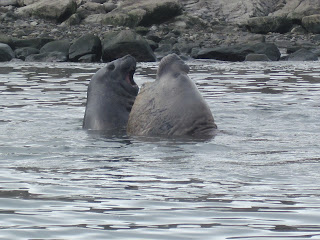 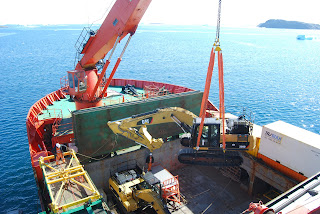 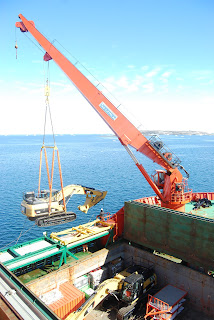 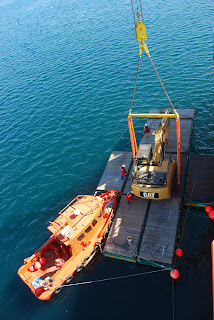 Unloading the 30 tonne excavator at Davis station
Posted by Craig Hayhow at 05:36