I got up early once again this time to try a moon bounce contact with Bo in Sweden. This time it was so easy it was over quicker than it took me to set up my equipment. Strait after Bo I had a contact with Arne also from Sweden and then I was half way through a contact with Rod in New Zealand when the moon sank too low to continue. That was amazing and proved the first time wasn’t just a fluke.

After doing the APANSA filter change I installed a new radio in the mess and also fixed one of the faulty vacuum cleaners and fixed a faulty phone. Our bloody movie server blew up today too and we don’t have any spare hard drives to replace the faulty one so unless we can scrounge up something to replace it we have lost all our movies, documentaries and TV series. What a blow this is going to be. You would think they would give us spares or back them up on another computer? There were some really good documentaries and TV shows I had been watching that I will really miss now. We need to come up with a miracle here.

Cookie sent a photo of the rarely visited Western side of Mt Elliott to Fred Elliott, the bloke it was named after. He took this photo when I travelled with him on the reccie trip we did to the Western side of the David Range. Fred was wrapped and sent us a couple of sketches he did, one from the top of Mt Elliott looking towards Fang and Mt Parsons and also one of the flag raising at the first landing at Mawson in 1954. We are going to frame them and hang them in the bar.

Later we had a fun night at Klub Catabatic watching Eric Banner skits of Chopper reed. 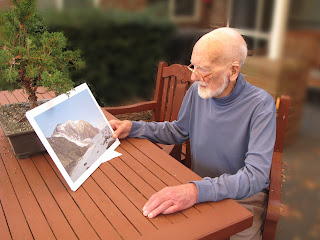 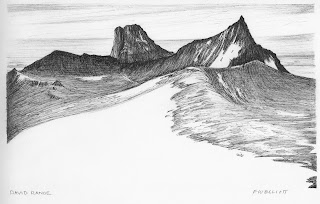 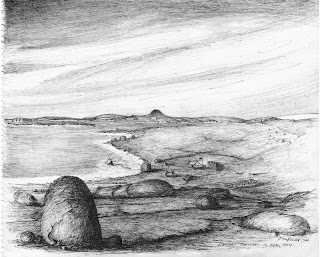