Today really sucked. For some reason one of the old and clapped out refrigeration container (we store our vegetables in) had a rise in temperature and all the food has gone rotten. It smelt like some one had died in there, so it was all hands on deck to try and save what food we could. Apparently this happens every year and nothing is ever done about it.

Any way, the carrots were reduced to a dripping ooze and were not salvageable. Half of the cabbages where all brown and slimy so half the leaves had to be taken off and what was left washed. Then there was about twenty boxes of onions that all had to be sorted. The black gooey ones had to be removed and the dodgy ones had to be peeled and the black gooey bits scrapped off. Most of these would go back into the dodgy old container while I cryo vacuumed about two hundred.

It was a stinking mess and every body stunk of onions and even the mess was a mess. I often think it would be better to just bury stuff outside and dig it up as required like they did years ago.

Any way, after the major afterwards clean up we all had about three showers to remove the onion smell then we all just kinder hung out and vegged all day. For some reason I am still feeling very low and lethargic and can’t be bothered doing anything. I need to get motivated. Outside the wind was blowing thirty knots and it was cold as hell.

Diner was nice with some really yummy chicken and some smoked salmon. I will have to find out how to make that chicken. Latter I ended up at the bar chatting with a few blokes late into the night. 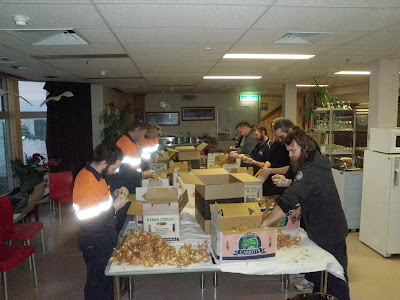 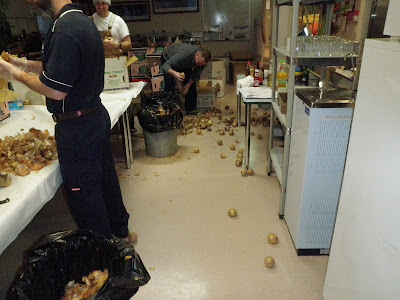