I got up early as I had to program two GPS with the Auster rookery way points and route and I also had to print and laminate two maps of the area, a weather chart and pick up a PLB. I didn't have my head torch as I had already packed it and on the way back from the Operations building while walking through the deep snow and ice rubble I fell hard flat on my face and chest. It hurt like hell but lucky nothing was broken.

I had some breakfast and a coffee then went over to the emergency vehicle shelter and packed the remainder the equipment on the quad bike. There was no wind, -25c and a very cloudy overcast sky and by 0930 it was light enough to head off. Because of the cloud there was a white out and you could see no definition of the surface making it a bit dangerous as you couldn't see the sastrugi, tide cracks or ice lumps as we were riding along. The other hazard were our helmet visors icing up with condensation of our breath. Riding with the visor up was much better but you could only do this for a few minutes before you got a massive ice cream head ache and were forced to close it again. 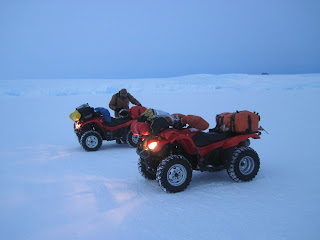 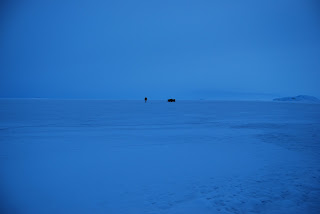 The scenery was breath taking as we rode parallel and close to the plateau ice cliffs and wandered around huge ice bergs and Islands. Mostly the sea ice was nice and smooth with little snow but occasionally we would come across large areas of statrugi that was hell to ride over. Along the way we pulled up at a seal hole. All around was seal crap and some bits of flesh from his last meal. It was most likely a Weddell seal who spend the whole winter chewing the ice to keep the hole open. They usually die when they wear their teeth down. While I was taking a photo and messing about I though shit, I hope it's not a leaped seal !! They will eat humans. So we got the hell out of there. 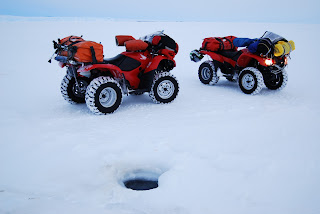 After an hour or so I pulled up at a huge ice berg with lots of caves to take a break and to stretch our frozen legs and to get the blood circulating again. The caves were great and looked like they were formed by melt water. All the grounded bergs are this beautiful pail blue colour, full of fractures and slowly crumbling. I would love to know how old they are? ten years? one hundred years? or even maybe thousands of years? Nothing would surprise me in this land. Some of the bergs are discoloured or striped and there is always some thing new around the corner to see. 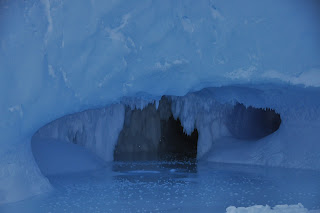 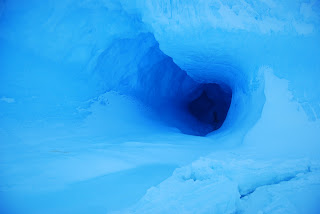 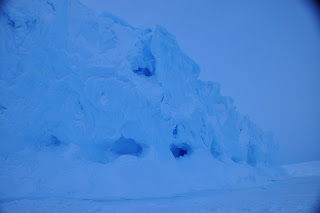 The Auster emperor penguin rookery is one of the largest emperor penguin rookerys in Antarctica and is on the sea ice. They come to this same place every winter to lay their eggs surrounded by huge ice bergs. So how long have the birds been coming here? How old are these ice bergs? Once a huge berg rolled over and wiped out the whole seasons eggs and babies and threatened the whole colony to extinction.

After our break we continued on and not long after we came across Macey hut which in the great huge expanse was like finding a needle in a hay stack. The hut sits on Macey Island and the scene was some thing out of Alice in wonderland with huge ice bergs all around us. There is also a googlie or apple hut there as well. We went inside and boiled up some water for a quick cup of soup. In side was a barmy -30c and every thing was rock solid including the dish washing liquid. The gas bottle was leaking bad and the other one was empty so we concluded as the leak was out side we should be OK. 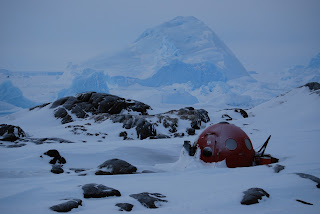 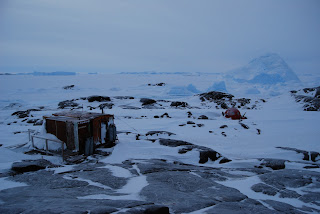 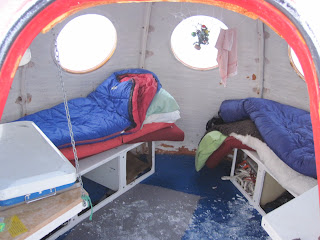 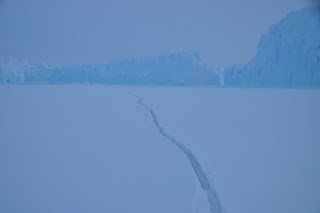 Tide crack
Around the hut were hundreds of dead Adelle penguin skeletons, feathers and tones of bird shit so there must be hundreds of them nesting here in summer. You could still see all their nests made from little stones. We didn't stay long and after our drinks we headed off to the rookery getting there about forty minutes later. We had to cross lots of deep stastrugi on the way and the rookery is located in the middle of all these huge ice bergs and is divided into two areas. I wonder if this is there way of protecting the colony should one area get wiped out by an ice fall? 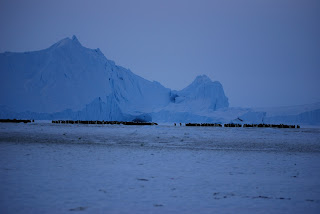 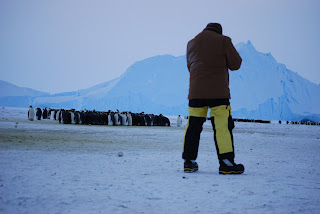 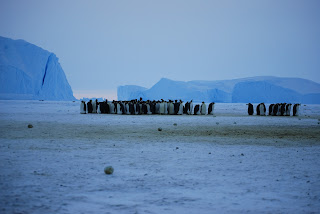 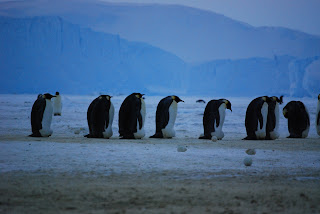 I estimated there to be about one thousand birds in each area with a constant flow of birds moving between the two. The ice is covered in bird shit and there are frozen discarded eggs every where. I assume the new breeders drop them and cant get them back on their feet and they freeze in only minutes. If this occurs early, the bird can lay another egg before leaving the male to look after it.
Half of the birds were sitting on eggs while the other half were either courting or wandering about looking for a mate. The mating courtship was fascinating to watch as they mimicked every move of the other, preened each other, rubbed each others belly or just hung out smooching and laying together. They really showed a lot off affection to each other. 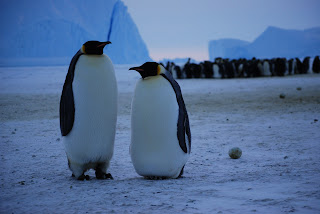 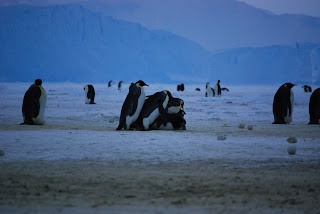 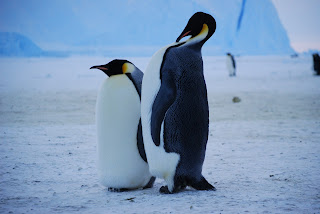 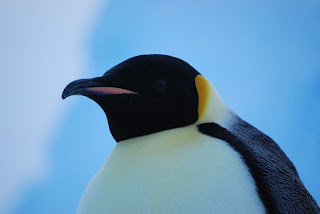 ﻿
The birds are huge and really fat and the plumage is magnificent. Their eggs are also huge and almost pointy at one end. While sitting at the regulation distance, they would waddle right up to us and sit there looking and some times squawking at us. After a while they would get bored with us and waddle off back to the mob. It was such a serene scene in such a baron desolate hostile location. It was all very quiet with the odd squawk and call and at the same time the ice bergs would creek and crack threatening to collapse at any moment. Mostly all the birds were very well behaved but every now and then a fight would break out and they would all squawk and peck each other. Also now and then a penguin would announce she is ready to mate and five or six birds would jump on top of her at the same time, it was so funny to watch them. 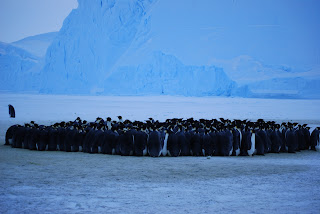 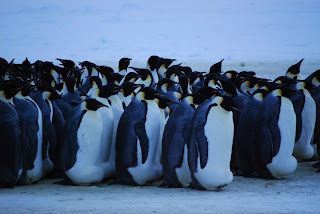 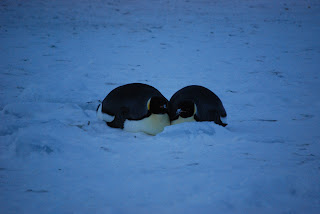 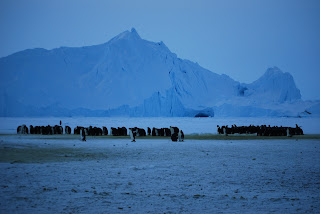 ﻿
It was so cold I had to change the battery in my camera about every five to ten shots and replace it with a warm one from inside my glove. After about an hour and a half my camera started to shut down from the cold. The display would cease to function, then the auto focus would creak and grown and then lens would stop functioning and this was time to give it away. By this time we were starting to seize up as well. 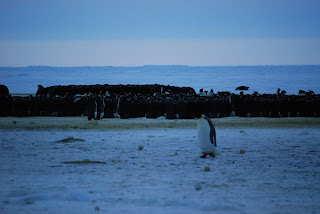 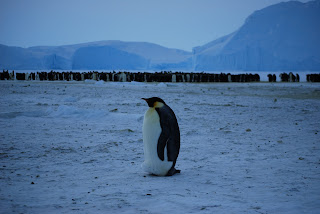 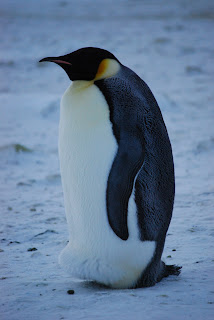 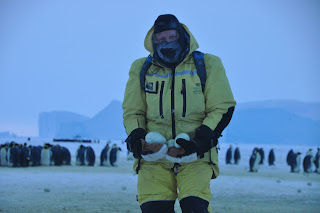 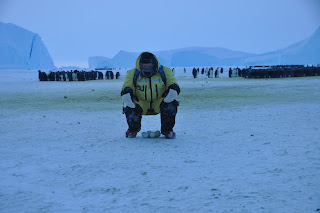 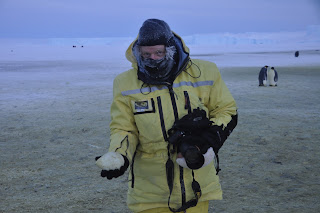 I was very concerned about the time and to keep moving before the sun goes down and not far from the penguins was a massive ice cave and I wanted to take a look at tomorrow but we decided to look at it now on the way back. We took a few photos and then I went to set my GPS for the course back to the hut and it was not functioning properly in the extreme cold. The display was freezing and taking ages to change. I messed with it for about fifteen minutes and the sun went down leaving us in the dark. The quad bike head lights were useless as the were pointing up and we were driving almost blind. I got my GPS going and had to hold it inside my glove taking it out occasionally and pressing the light to check to see where we were. It was no drama as I knew in my mind where to go any way and I used mostly my memory, but it did make driving over the statrugi very difficult and dangerous. It made me think about getting lost or caught out in bad weather which must be hell. At one stage I drove right into a large ice hole and nearly went over the handle bars.

Finally we got back to the hut very cold and in the dark. I turned on the gas and the leaking gas was now a hundred times worse and we couldn't the bottle so we had to hunt around for a full bottle. Out of the six bottles there was only one full one so in the dark and in minus thirty we had to disconnect it from the apple and drag it fifty meters back to the shack and then change it out with the leaking bottle. It was no easy exercise and we were both shot by the time we had finished. We went into the shack and lit candles and tried to get the heater and all the burners on the stove going to heat the place up. It was so cold we couldn't see through our breath. My balaclava had been frozen onto my face all day and when I took my helmet off I couldn't remove my balaclava as there was a mass of ice all through my beard. I tyred heating it for a while and got sick of it so I started to rip it off pulling all the hairs out of my face. It hurt like hell but I just wanted this damb thing off. Finally I got it off and it was full of hair embedded into the ice and it looked disgusting. I hung it over the heater along with my gloves to dry out. 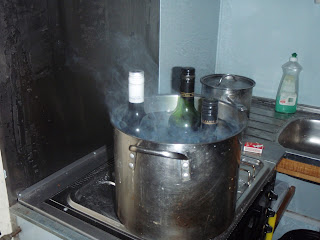 ﻿
While the hut was warming we opened a bottle of wine and it pored out like tomato source. It was so funny, we had to boil up two bottles of red wine, a bottle of port and the glass I just pored in a pot on the stove. It took ages just to get them to about five degrees and steam was coming off them as if they were boiling. As we slowly thawed out we had a great time chatting and cooking up a meal. We eventually started to melt all the ice out of the hut causing rain to fall and raising the temperature into the twenty's so we could finally remove our antarctic clothing. Suddenly we smelt some thing burning and we quickly started looking for a fire in the hut when I realised what had happened. The ice had melted out of my balaclava and the hair from my bead had fallen onto the heater and burnt. We laughed like hell. It was a fun night until the time came to climb into two sleeping bags fully dressed to try and get some shut eye. I find it so restrictive and claustrophobic but finally I fell asleep. 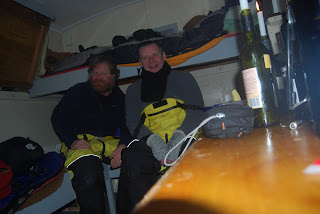