This morning I reluctantly started back on the audit and reorder. After doing the ARPANSA filter change and having lunch, I headed over the ANARESAT building to reset the automatic tracking system that had dropped out during the last power outage. It took me about forty minutes to dig my way into the building as the snow was nearly over the door once again.

We have quite a few black outs here as we rely on the wind turbines for most of our power and when the wind suddenly drops the diesel generators have to kick in very fast to take up the load. It’s quite an advanced system and saves us tones of diesel but as any alternative energy source it does have its limitations.

Once done at ANARESAT I headed back to the Operations building and copied some documents and maps for the trips I am planning to the Casey range. I reprogrammed Geoff’s GPS and that was about it for the day. After dinner I watched some old ACDC concerts on the projector in the bar and ended up having a big night with Pepe & Keldyn. 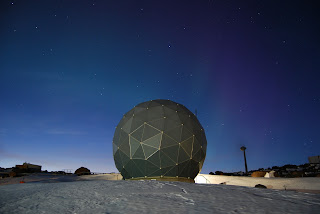 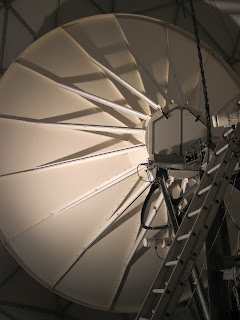 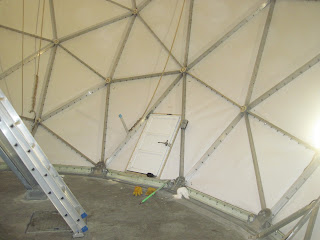 Ever wondered what is in that great big scary dome?

Our satellite communications network, known as ANARESAT, uses Intelsat geostationary satellites to provide telecommunication links between Australia and the three Australian Antarctic stations. The satellite earth-station at Mawson was installed and commissioned in January 1988. Before this Mawson relied on high frequency radio for all it's communications back to Australia. Mawson ANARESAT operates with a modest bandwidth of 500 kbps. (kilobits per second)

ANARESAT operates in C-Band (6 & 4 GHz) and uses 70 MHz IFs. The dish, which is 7.3 metres in diameter, is enclosed in a Kevlar radome to protect it from the harsh and unforgiving environment.
Posted by Craig Hayhow at 04:00