Today turned out to be a nice sunny day with little wind. For most of the morning I sat in my room working on my blog, reading the news and going through my emails. When I saw how nice it was outside through the big windows in the mess I thought bugger it I’m going fishing today. Nobody was interested as the rugby was on TV so I peeled a few prawns for bait, got my gear organised and drove out onto the sea ice in the harbour on my own.

I picked a random spot out in the middle and got the jiffy drill out and drilled a couple of holes through the one and a half meters of sea ice, set up my camp chair, bait and bucket and dropped in my baited line. In the other hole I lowered my camera. I should have consulted a chart beforehand as it was over ninety meters deep and I should have moved closer to the rocks but the jiffy drill was playing up and it took me over an hour to drill these two holes so I just persisted and enjoyed the serenity. It was very cold at around minus twenty six but very relaxing just the same.

As expected there were lots of little fish nibbling and stealing the bait. After a while Peter C walked out and had a go using my other rod and he caught a monster which tangled our lines together. The fifteen centimetre fish froze almost immediately once taken from the water. His rod was now out of action but I fixed up my tangle and dropped back down and a short while later I landed a monster twenty centimetre fish and then we decided to call it quits.

Everyone talks about these fish tasting horrible as they are full of antifreeze so I decided to put it to the test. I filleted both fish and fried them up for a taste test. Actually they were pretty good so I would have to say myth busted!! The type of fish we caught were Nototheniid - Pagothenia borchgrevinki which are one of the most common of the 203 bottom-dwelling fish species of Antarctica. 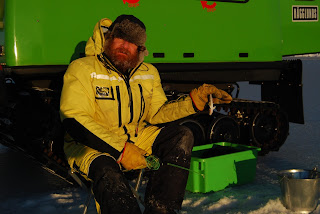 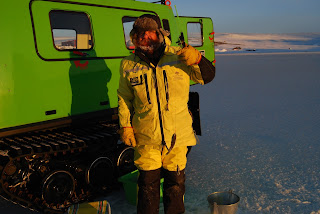 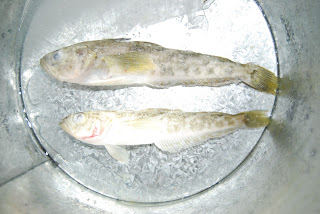