Today I was slushy once again. Outside it was minus twenty six degrees and the wind was twenty six knots and blowing snow with limited visibility. Tonight’s foreign movie was a French/Canadian movie called Vers le sud. (Heading south)(2005)

The scene was set in Haiti and its about three middle aged women (Cougars) exploiting the local men. It was quite a good movie and went over well. After this we watched a couple of episodes of Trailer Park Boys which I’m really getting into as it’s so funny. 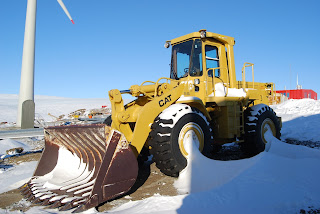 One of the two loaders at Mawson
Posted by Craig Hayhow at 07:31