Today was another beautiful day, sunny, blue sky and no wind. You have to be very careful outside on these days as you get sun burnt so easy from the reflection off the ice. Today we were expecting four flights which turned into six flights. Several times we had to escort Adélie penguins off the ski way while waiting for the flights to arrive. 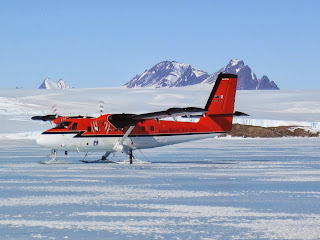 The twin otter was coming over from Davis, it was to land here to refuel before heading out to Richardson lake about six hundred kilometres further out south west of us to see if it could land successfully on the lake and make sure it was safe for the Basler to land. Then it would fly back to Mawson to be refuelled before flying back to Davis station. 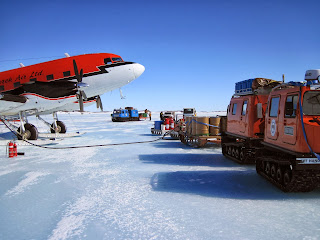 The Basler was coming over from Davis carrying a heap of cargo. It will unload at Mawson and be refuelled and load about twelve drums of avgas to cache out at Richardson Lake for the Tregoning project before returning back to Mawson to be refuelled before flying back to Davis station. At last minute, Cookie arranged to take the Basler out for a flight out the back of twin tops for a recce for the Vogel project which he, John, Stefan and Barbara boarded. As it turned out, the twin otter couldn't land at Richardson Lake due to low cloud so both aircraft flew back to Mawson, refuelled (The Basler unloading all twelve fuel drums) and after Cookies joy flight, headed back to Davis. 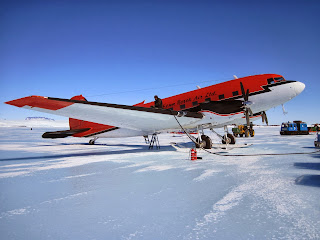 At one stage I had to move the orange Hag a bit closer to the Basler so the refueling hose would reach and I got about thirty meters and it came to a crunching halt with a burning smell. I grabbed the fire extinguisher and gently lifted the engine cowling but there was no fire but the starter motor was burnt out and the Hag had to be towed back to the workshop. It was a long day for us out on the sea ice and we all got very sun burnt. Richard was a great help on the radio (VLV Mawson) and he is a good worker. After work I went and had a spa to get the chill out of my bones and after dinner we watched a good movie called Death Proof. After dinner, Justin took Lydie, Bianca and Stefan for a drive up to Mt Henderson and the blue Haglunds broke down forcing them all to spend the night up there. 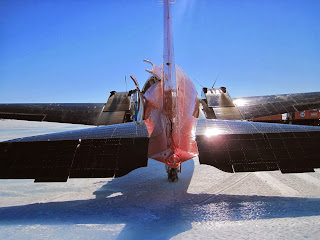 All the winterers were excited to get their mail and all the goodies they had ordered. I got a new lens and a couple more 2 Tb hard disk drives. My valve didn't make it and hopefully is still over at Davis with the remainder of our cargo. It was nice eat a fresh apple and a juicy orange after nine months of rationing. 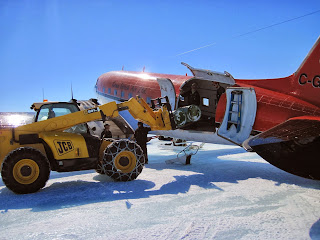 Both aircraft are operated by Kenn Borek Air Ltd based at Calgary International Airport, Canada. The Basler BT-67 is a fixed-wing aircraft produced by Basler Turbo Conversions of Oshkosh, Wisconsin. It is built on a retrofitted 1941 Douglas DC-3 airframe, with modifications designed to improve the DC-3's serviceable lifetime. The conversion includes fitting the airframe with Pratt & Whitney Canada PT6A-67R turboprop engines, lengthening the fuselage, strengthening the airframe, upgrading the avionics, and making modifications to the wings' leading edge and wing tip. 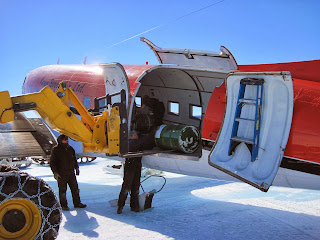 · Operates on wheels and wheel-skis 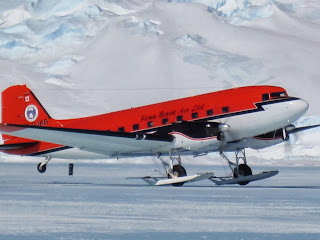 · Twin Pratt and Whitney PT6A-27 turbines rated at 620 shaft horsepower each
Posted by Craig Hayhow at 06:55