October has been the windiest month for the year so far.  During October we recorded the highest total wind run for the year so far: 38787km! Second was July with 37353km and third was January with 36606km.
This averages to a wind run of 1251 km/day (52 km/h)

Temperatures - at Mawson during October we expect:
The coldest temperature for any October day on record at Mawson was -29.0°C on 02/10/1980.

October was much warmer and windier and less sunny than the long term means. Every day of the month we had strong winds and only five days of the month that we didn't experience gale force winds!

We had a total wind run of 38787.1 km for the month. Total wind run for the year so far is 329,171 km. October was dominated by many days of blizzard, blowing snow and snow fall. 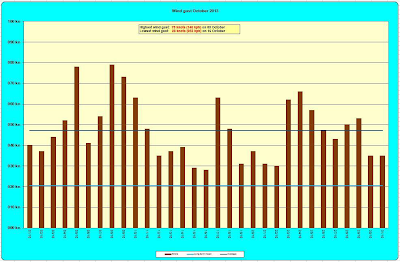