I slept in till late, got up and cleaned the bathroom and then had some breakfast and relaxed while reading the paper. It was a pretty good day, overcast and blowing about twenty knots and the temperature was about plus two which was melting all the snow causing slush.

Moving the BGAN satellite transmitter was a good move as it has now solved the regular intermittent outages we have been experiencing and the RSL is now rock solid and flat as it should be.

Mid afternoon I went down to the shack with the intention of working as many Australian stations as I could. I must have worked over thirty stations and just as many Japanese stations including many portable stations. It was nice to hear a lot of Aussie stations on the radio. Hopefully tomorrow if the weather is fine and there are no flights due, John, Peter C and I are going to ride up to Fang hut and attempt to climb Fang peak which is quite a difficult and steep summit and a major feature in the Framnes Mountains. 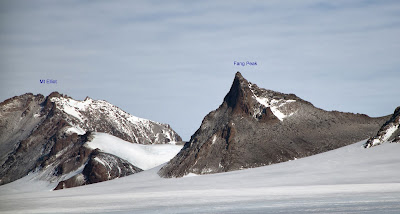