Once again, no sleeping in due to having to do ARPANSA filter change. It was a pretty crappy sort of day today with minus five and blowing 30 knots. The temperature has been getting down to minus eight over the last few nights and the sea is refreezing and is now about fifty millimetres thick in the places that broken out, too thick to smash through with the biggest rock I could lift.

Late in the afternoon I walked down to the transmitter building and spoke to a few people on the radio, mostly from Australia and Japan, but also with a bloke in Finland. So far I have worked over two thousand stations from over one hundred and thirty different countries. Later, after a toasted sandwich for dinner we watched Coast and then a couple of documentaries. 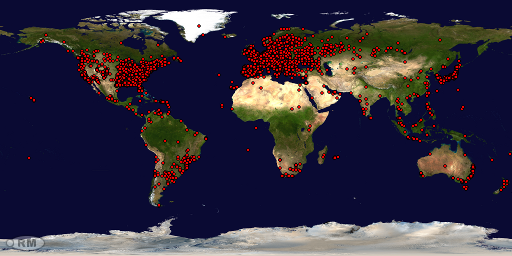 Locations of stations I have contacted via ham radio
Posted by Craig Hayhow at 04:39