This morning a 50 – 60 knot blizzard was blowing outside and being the first Monday of the month, the monthly report was due so I decided to lock myself in my room to complete it rather than making the audios trek down to the operations building. I finally got it finished in the late afternoon then fired off a heap of emails about future work task descriptions and to my delight I managed to get quite a few knocked off my list. I then spent the rest of the day planning for this month’s work load. I still have a lot to do but even with last month’s disasters I managed to make some good progress.

June being the darkest month of the year and with the sun not coming above the horizon for 16 days of the month we didn’t expect too much sun. We only had 5.3 hours of sunshine for the whole month of June and that explains why I have had polar insomnia nearly every night for the last four to six weeks. The lowest minimum in June was -28.0°C and the highest -09.5°C.

The average daily wind run (the measure of how many kilometres of wind pass the station in 24 hours) was 1049 km per day for the month. This is well above the long term average of 994 km per day.

Blizzard conditions were recorded on 3 days for June, with 4.3 expected. We have had a total of 22 blizzards for 2013 so far. There were 22 gales compared to 16.5 expected for June, 30 days of strong wind, with 26.8 the average. 3 days of snowfall were observed, well below the expected average of 4.3 days. A Strong Wind day has wind in excess of 41 km/h and a Gale is wind in excess of 63 km/h.

June has been mild, dark and windy. The monthly temperatures were in line with the long term mean temperatures but with slightly higher maximum temperatures. We had a total wind run of 31471 km (don’t drop your hat) which was significant higher compared to previous month however maximum wind gusts were moderate. Due to our geographical location we only had a total of 5.3 hours of sunshine for the month. 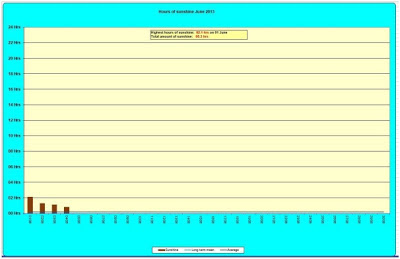 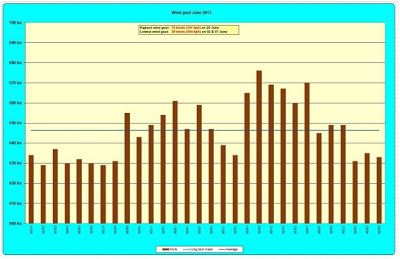 When all the following conditions exist, it is termed a blizzard:

Note from our BOM weather observer:
This is why often I say we had a blizzard or I woke up and there was a blizzard raging outside yet they were not officially recorded by the Bureau of Meteorology.
Posted by Craig Hayhow at 03:03