Today was a fifty knot blizzard once again. After ARPANSA I went over to the ANARESAT building to do some work. I spent about forty minutes digging it out just to get inside and after about two hours work swapping modems and performing various checks I had to go back to the red shed. Before I left I mopped up all the water in the cold porch. After an hour in the red shed I walked back to the ANARESAT building, back through all the deep snow drifts only to find another meter of snow blocking the door again. After digging this out again, I spent another two hours calibrating the satellite beacon receiver and various other things and when I opened the door to leave a wall of snow fell in on me. The amount of snow in this blizzard is amazing. Later on I worked on the BGAN emergency satellite phone and a whole pile of documentation.

The boys made it back from Colbek late last night and are sure glad to be home after living off rat packs for a few days. I think a hot shower and a sit down dunny would be high on their priority list. One bloke went without a crap for four days, now that has got to be a record?

After dinner we had “The people’s night”, this is something I rolled out last week. The idea is every Wednesday four people put on a half hour presentation. It can be some photos, a movie or a talk about anything you think might interest your fellow expeditioners. Last week I kicked it off with my scuba diving photos, Luc showed his trip around Ice Land and Cliff showed a movie about diving with minkie whales in North Queensland. It was terrific and was attended by most of the team. This week I showed a heap of photos and some short movies on “My life as a rig pig”, twenty five years in the Oil & Gas industry, Cookie showed a movie of a project he helped setup with the Aborigines in Arnhem Land, Keldyn showed a couple of TED movies and Jeremy showed an awesome underwater movie he filmed here at Mawson below the sea ice last summer. The idea is to get to know your fellow expeditioner a bit better and to watch something completely different to the usual TV or movies. So far I think it is working very well. I have a lot more interesting stuff I’d like to show and I hope more different people sign up each week to make it something to look forward to like Luc’s foreign movie night. 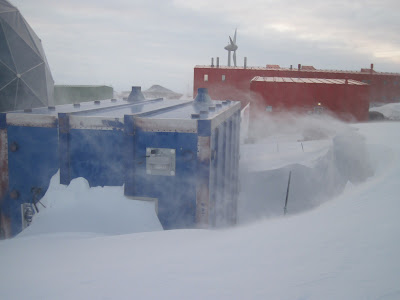 The ANARESAT equipment room. You can just see the RHS top door frame
﻿
Posted by Craig Hayhow at 06:57