Once again outside was overcast skies and windy so I lied in bed for a while before getting up to read the news and see what was going on around the joint. I had an EME sked with N7NW at 1220 so there was no hurry to do anything. Eventually I had a shower and wandered out to see what was going on. Justin, Keldyn and John went to Maycey hut late last night and there were just a few old derros lurking about in the kitchen.

I had a bit of a bit and made a take away coffee and set off for the transmitter building. It was cold and windy on the walk down and when I arrived I took out my glasses to log onto the computer and the arm was broken off. Not a good start to the day. Now that's three pair of broken reading glasses I have to use down here. I went outside and raised my 6m antenna and the pulley at the top of the mast is buggered and its now really hard to raise the antenna. Once I got it up and aligned the position using a compass due to the white out, I went back inside and got everything fired up only to discover there was a problem with the pre-amplifier up on the antenna.

I went back outside and messed about and discovered it was a short on the coax. By now I was running late for the sked and I had to run up to the operations building to get some tools to replace the faulty connector. Once I got back I replaced the most obvious connector that I had trouble with in the past and that didn't fix the problem. I was rushing and not thinking logically and then I replaced the connector on the other end also for no avail. By now I started to settle down and think logically and found the culprit which was outside of course. By now my hands were going off and I had to run inside and warm then on the heater before continuing. Finally in minus fifteen degrees I managed to get the connector replaced and I went back inside to fire up the transmitter.

Unfortunately time had just about run out and the sked was over. John VK5SIX was listening so I decided to have a go with him and then his transmitter refused to fire up so the morning was a complete waste of time but at least I repaired the fault for next time. This is such a difficult environment to try and keep electronics operating. After, I had a chat with John in Sydney and Kaz in Tokyo using Olivia and also a bloke it the States. I also had a chat with the radio operator on Marrion Island sub Antarctic base.

Dinner was a stale bread toasty, then I retired to my room to write up my blog. 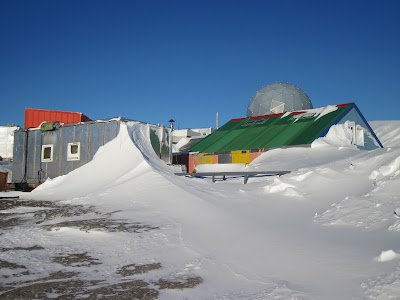 The Biscoe hut slowly going under 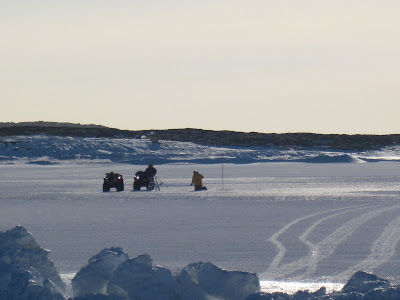