We left Mawson at 7am with a bit of blue sky and a stiff 20 knot katabatic wind blowing. I headed straight to the Forbes glacier and it was a pretty fast run with little or no Sastrugi what so ever. From the Forbes glacier I kept close to the coast checking out the ice cliffs and wandering through the Stanton group of Islands which would be a nice place to come for a day trip. In amongst the Stanton group I came across a nice little jade berg were I pulled up to stretch our legs and take some photos. 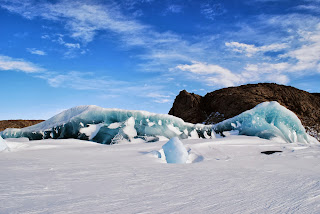 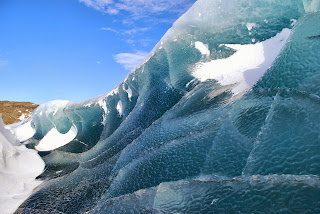 When seawater at depths of more than 360 meters freezes to the underside of massive ice shelves like East Antarctica's Amery Ice Shelf, it forms "marine ice." Enormous chunks of ice calve—or break off—from the ice shelf, creating icebergs. When one of these icebergs overturns, its jade underside is revealed. The beautiful colour of this "marine ice" results from organic matter dissolved in the seawater at those great depths.

The organic matter in marine ice is degraded phytoplankton—not phytoplankton itself, which cannot survive at those dark depths. It includes complex organic molecules like proteins, lipids, amino acids, and sugars, as well as carbon, iron, nitrogen, silica, and sulphur. Jade icebergs not only store these dissolved organic compounds, they also transport them from great depths back to the surface, where they can be taken up by phytoplankton.

Striped icebergs, perhaps even more scarce than jade bergs, are thought to form in one of two ways: either melt water refreezes in crevasses formed atop glaciers before they calve icebergs (creating blue stripes), or seawater freezes inside cracks beneath ice shelves (creating green stripes).

From the Stanton group we had a good run all the way down to the Jelbart Glacier with little sastrugi but I was expecting the worst around the Jelbart. Lucky for us a massive amount of powdered snow had filled in all the gaps of the crazy rafted ice protruding outwards in all directions around the Jelbart and I found it quite straight forward to weave my way in and out around all the obstacles and tide pools and by 11:30 we were out of the worst of it and making our way down to UFS Island for a look. 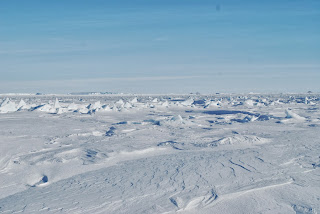 Down this way we ran into mild sastrugi which slowed us down but we did come across our first Weddell seal pup for the season that had just been born. 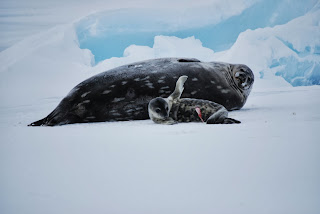 The sun was shining and the wind was almost zero so we pulled up at UFS Island (Norwegian - Ufsoy (bluff island) and Darron and I went off for a walk to climb the summit while Trent and Jeremy stayed back to check out the lower areas. The Island is quite large and we thought we were climbing the higher of two summits, but at 260 meters we discovered it had three summits and we had scaled the lowest summit. Never mind, but the view from the summit was spectacular. We descended via a different route and made our way back to the Hag for a snack and a hot drink. 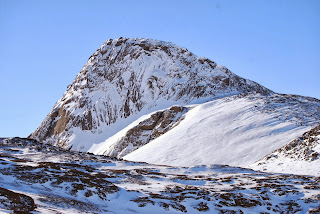 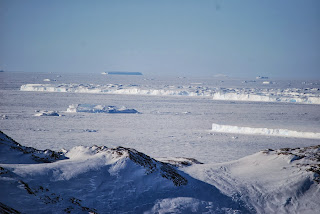 As it was still quite early in the day we decided to head over to Chapman’s ridge where Darron, Trent and I went off for a long walk along the lower sections of Chapman’s ridge past some frozen lakes meeting up with Jeremy who had moved the Hag to Byrd head at the far northern point of Chapman’s ridge. It was a nice walk, each of us doing our own thing keeping in touch via radio and visual contact. While crossing one of the frozen lakes I broke through a section of crazed honeycomb ice and fell heavily smashing my already badly bruised shin once again. Falling is a constant hazard in Antarctica and the risk of breaking a leg is always present. 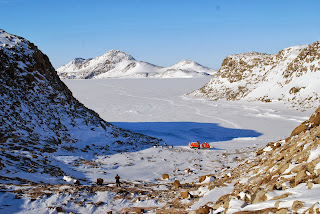 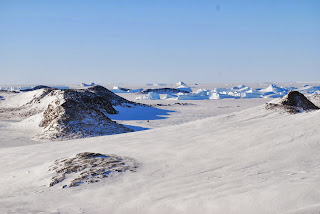 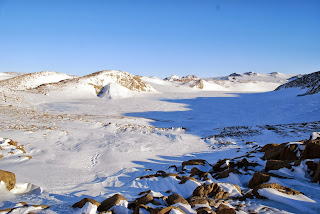 Once we reached the Hag it was a short trip through the Colbeck Archipelago to reach Colbeck hut which would be our home for the next five days. Colbeck hut is a pretty sad sight as it has been slowly enveloped by ice over the last decade and it will soon have to be abandoned to the elements. It has about ten centimetres of ice on the floor and you have to climb down into it from the surroundings. We unpacked all our kit and fired up the heater and stove and boiled up some water. 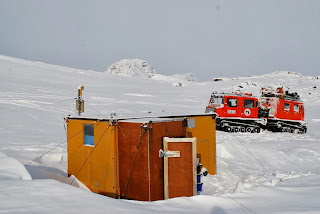 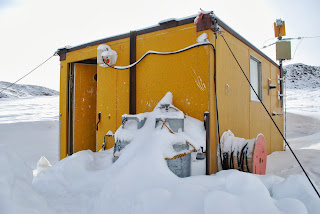 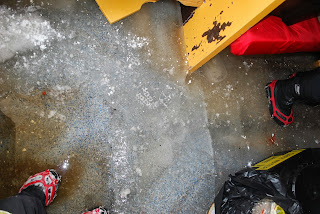 Jeremy and I slept in the RMIT van that had been towed down earlier on in the season. These vans were designed by the Royal Melbourne Institute of Technology (where I studied) and are years old but warm and comfortable. After a couple of beers watching the sun go down and then a hot meal, we slept well after a big day. 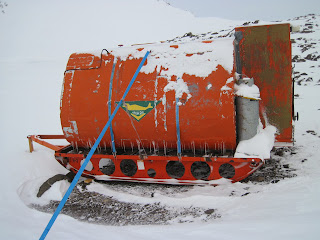