When I woke up this morning it was blowing snow 40 knots so the trip up the plateau was cancelled. I finished up some cleaning in the workshop I started yesterday and then did the ARPANSA filter change. After lunch the wind completely dropped so Chris, Cliff, Peter L and Peter C went to Macey hut to visit Auster rookery.

While there was no wind, I took advantage and went out and took some photos around the place. Later I took the new power supply down to the transmitter hut using the blue Hag. It was so heavy I ended up using a trolley as it must have weighed sixty kilograms. I plugged this new power supply into my amplifier and connected everything for a test run and it all worked perfectly. 42 volts at 15 Amps, that's 630 watts of moon bouncing grunt. While I had the Hag at the transmitter building I took the opportunity to remove a heap of heavy redundant equipment for RTA. After dropping this equipment off at the green store, I took the Hag back down to Red Dwarf and walked back to the Ops building. I did some more cleaning in the workshop then gave it away for the day.


At The Peoples Night I put on the slide show Harry Munstermann gave me on Monday and all the blokes thought it was terrific. Harry was Bills work colleague and MET observer while at Mawson in 1960.
Cookie played a couple of short comedy shows. Later I watched two episodes of a Nuclear Secrets a documentary I have been watching lately. 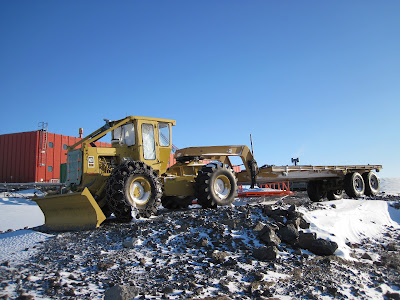 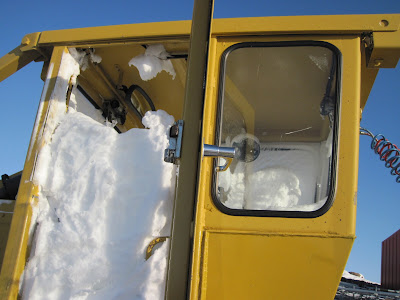 This is what happens when the door blows open during a blizzard
Posted by Craig Hayhow at 08:29