I got up very early this morning and as it was shaping up to be a great day, I woke every one up and after breakfast we packed up everything and were gone by 0800. We drove to Chapman’s Ridge as Darron had wanted to climb this striking feature for some time now.

Rising to 300 metres (1,000 ft) and extending southwest for 3 nautical miles (6 km) from Byrd Head. It was discovered by the British Australian New Zealand Antarctic Research Expedition, 1929–31, under Mawson, and mapped by Norwegian cartographers from aerial photographs taken by the Lars Christensen Expedition, 1936–37. It was named by the Antarctic Names Committee of Australia for P. Chapman, auroral physicist at Mawson Station, 1958

Trent climbed to the first summit; I climbed to the middle summit while Darron continued to the final summit. It was a hard slog but we were rewarded with breath taking views of the entire surroundings. Down below there was virtually no wind at all, but up on the summit the katabatic was blowing a stiff twenty knots and it was bitterly cold with frost bite a real danger. 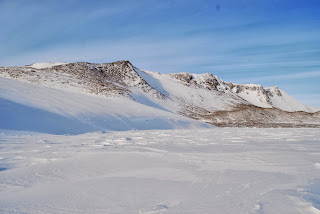 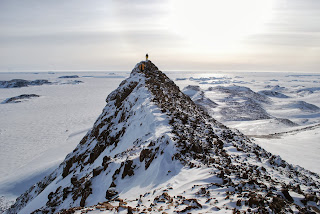 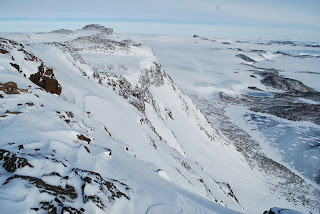 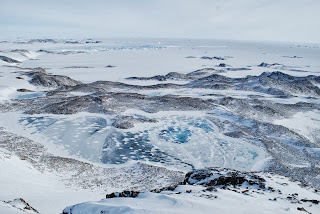 Tailor glacier in the back ground 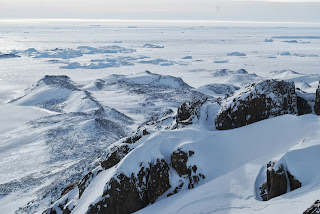 After a few hours we were all back in the Hag and we set course back to Mawson. About five kilometres for the Jelbart glacier we came across quite a large tide crack mostly concealed by snow. There were seals and penguins along the crack as far as the eye could see so I knew it must have been open. We stopped and drilled a few holes and decided it was too risky to cross so I drove roughly to the point where we crossed it on Wednesday and it looked just as bad. On Wednesday it must have been completely covered in snow and we crossed it fast enough to not be noticed?

I drove several kilometres along the crack looking for a better location to cross but it all looked the same so I stopped and we cleared an area and did some more drilling. I had 500mm sides and about a three meter snow span which was about the maximum you would consider crossing in a Hag. I make the call to cross while the other watched by. I wanted to attempt it at high speed but the others convinced me to take it easy so I took it easy. The heavy cabin seemed to cross without incident, but when the caboose started to cross the whole span collapsed and the caboose fell at a 45 degree angle into the frigid water.

I heard and felt the ice break so I gunned it and managed to pull the vehicle out without incident pulling up at a safe distance and walking back to inspect the large hole in the sea ice. It was a good lesson and a wakeup call to remind up we are driving across water that is thousands of feet deep. Tide cracks are an ever present hazard and as long as you don’t hit one parallel you can usually winch yourself out without too much drama. This is why we keep all our emergency equipment tied onto the roof and we have emergency escape hatches in the roof or the vehicle. 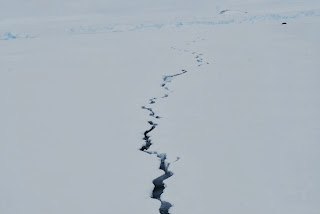 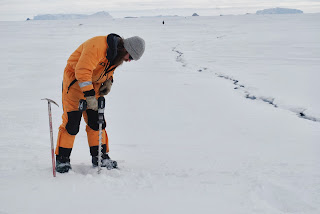 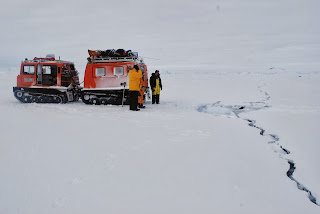 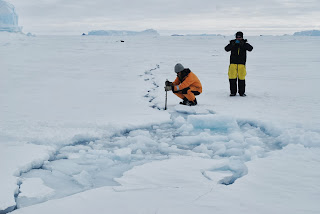 After this little drama we continued on towards the Jelbart glacier rounding it once more without incident and when we were several kilometres clear and I was starting to relax and breathe again I felt that sinking feeling once again. I had driven into a tidal pool covered in snow without realising it and we came to a complete halt. 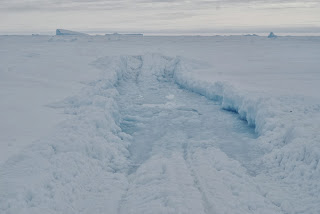 Off we went again without further incident and after about an hour or so I decided to deter to some huge caves I could see in the ice cliff for a look. When we got there; there were two seals that had just delivered pups so that was a bonus. We took a few photos and then hit the road again. 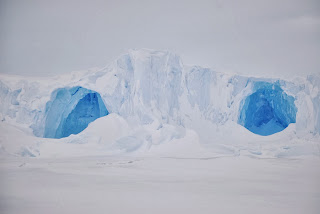 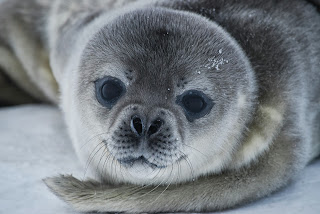 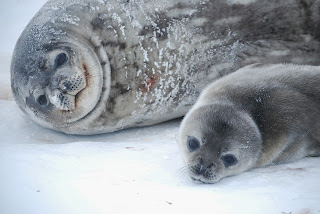 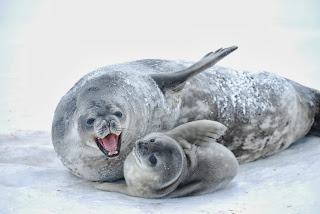 The going was pretty good although surface definition was still very poor. We passed an area about twenty kilometres west of the station that had absolutely no snow on the sea ice and the sea ice was perfectly smooth and a lovely torques in colour. We got back to station around five thirty, packed up, fuelled up, cleaned up and sat down to watch the AFL grand final. It was a great successful trip and everybody had a great time. 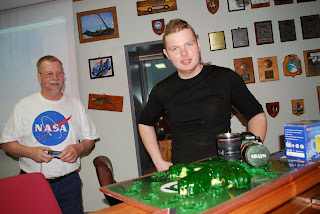 It was Keldyn's 27th birthday today too.
Posted by Craig Hayhow at 03:12