First thing this morning we had an emergency meeting at 0800. John our field training officer and Malcom our Doc may have to fly to Davis to help retrieve and treat the three injured people in the chopper still out on the Amery Ice shelf. I was crook with severe gastro. The wind got up to over 50 knots so there will be no flights to Mawson. The injured people were flown down to the sea ice in the second chopper in the late afternoon where a Twin Otter was able to land and pick them up for the trip back to Davis where these two aircraft were followed by the Basler. The three injured people (including the pilot who flew me around Mawson) are reported to have back and neck injuries.

I spent the day working on the tide gauge communications coil. I managed to dig out the potting compound and clean out all the corrosion and insert some new components and wiring and managed to get it working again, and then I re-potted the whole lot sealing it from the corrosive salt water. I was pretty happy with myself and I’m sure the scientists back in Kingston will be very happy also; otherwise it would have to wait until after V4 to be deployed again. Later I had an EME sked with Lance W7GJ at seven thirty. I received eleven decodes from him but he got nothing from me. 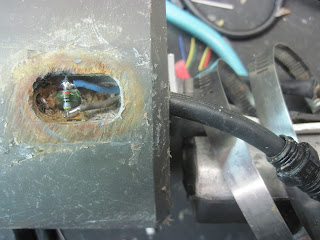