The wind has dropped to 20 – 25 knots today so John and I decided to go up onto the plateau to replace cane poles that have blown over in the last few blizzards. It was nice to get off the station for the day. The wind was quite blustery at times with some blowing snow, but the temperature was nice to work in.

We cut a lot of old poles out that had melted down and also dug a lot of old ones out of the ice. It’s good to be cleaning up this pristine environment. I would really like to get rid of all the old fuel drums from up there. Most of them would probably come out on a warm sunny day, but carrying them all back to station would be an issue. We work pretty fast as a team and we had the task finished by around two o’clock and we were back on station shortly after packing up and refuelling the Hag.

These cane poles snap where they enter the ice which tells you something about the force of the wind. I have suggested they trial fibreglass squid poles and see how they go. While working we had a visit from a snow petrol and a skewer. 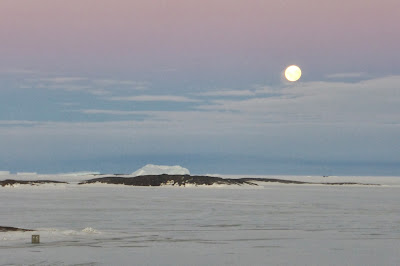 The container before it blew away
Posted by Craig Hayhow at 03:37