Today was a magnificent day, +3.2c and 5 knots of wind with blue sky. It doesn’t get any better than that. The day started with email ping pong that when on for a couple of hours. Once I was done with that, I got a trolley and moved the old tide gauge box all the way back down to the transmitter building for storage and then I went and got the old tide gauge inside its new crate and took it all the way down to the RTA container that is now near the helipads.

We cut all the VoIP phones over to the new VoIP server today and so far everything seems to be working fine and we moved every PC across to a different VLAN. I decided I would install the new tide gauge today while the weather was so good so I got the blue Hag and loaded it up with all the necessary equipment and while I was waiting for Richard to have lunch, I went up to the ANARESAT building and restarted the automatic antenna tracking control for the 11m dish that had stopped working some time ago.

I drove back to the operations building and filled two Nelly bins with rocks and gravel and took them back up to the ANARESAT building and sprinkled it all around the building in the hope that it will speed up the melting of all the snow and ice that has prevented us from getting into the building all year without digging for hours. It really needs to be smashed up and dug out with the excavator. I will see what it looks like in January and maybe after it has melted a lot I can get one of the plant operators to dig it out for me.

I then drove down onto the sea ice which is looking a bit shabby at the moment and drilled a couple of access holes for the tide gauge. Richard wandered over and helped me using the underwater camera while I used a grappling hook to remove the plug. I cleaned all the debris out of the hole and then raised the plug to the surface. There was quite a large ice fish following all the action that kept getting in the way. I lowered the new tide gauge down the hole and carefully guided it into position. The whole task was over in no time and I spent the rest of the afternoon packing away all the equipment.

All the snow and ice around the station was melting so quickly today, there were small rivers and large puddles everywhere. The deiso’s spent most of the day digging and pushing snow around with the excavator and bulldozer while most of the other tradies were involved with the annual shutdown of the main power house. After work I went down to the transmitter building and raised my 6m antenna to see if there was any propagation back to Australia or South Africa, but the band was quiet. I checked the other bands and they all were rather quiet also except for a few Aussies chatting. I was so tired I didn’t hang around and went back to the red shed for a shower before dinner. 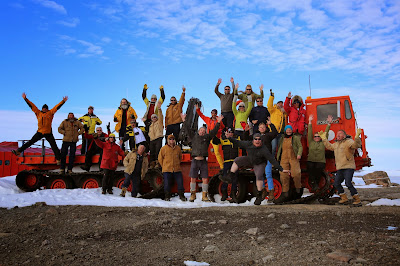 Mawson summer crew including the project personnel
Posted by Craig Hayhow at 06:14