I had the worst sleep last night or should I say lack of sleep. It was rough as guts and we rocked and rolled all night and I was sliding up and down the matrice all night. At one point I got up for half an hour and then tried to get back to sleep. It was very noisy too with waves bashing into my porthole and things falling to the floor. I decided to have cup noodles for breakfast rather than risking a plate of food. By the time I got motivated and rugged up to go outside and film the waves bashing into us, the conditions had moderated substantially and the wind dropped from 30 knots down to 20 knots. I did some filming anyway and took a lot of photos around the ship. We had a muster this morning and it was too rough to muster outside so that was a bonus. We also had field training on GPS, a resupply boating meeting and an ice berg watch meeting. Lucky me has the 00:00 & 06:00 slot.

At 16:30wst day seven we sighted our 1st Ice berg at Lon 113.79E & Lat 57.43S. It was larger than our ship and came within 3nm of the port side of the ship. At 18:30 we passed another smaller berg and a huge berg will pass by very close around 19:40 tonight. For lunch I had the usual prawns, salad, smoked chicken, smoked salmon and pickled octopus and just to mix things up at dinner I had the same but swapped the prawns for some lasagna. The sun is setting very late now and rising very early so it won’t be long till we have permanent daylight. 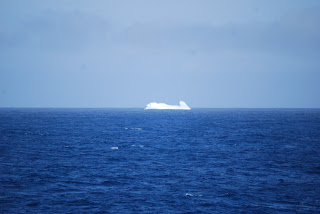 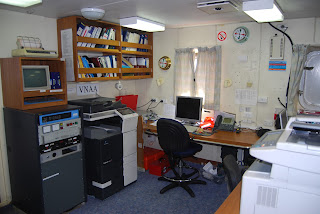 Here is my office in the radio room on the bridge. 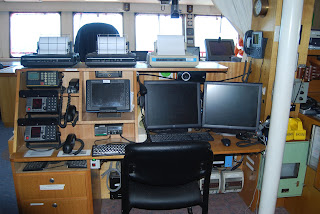 Here is the radio console where I operate comms from. 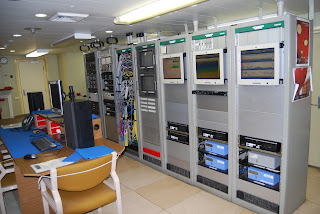 Here is one of the two equipment rooms I am responsible for.
Posted by Craig Hayhow at 20:31