Today we changed time zone again going back one hour and this time I remembered and got up on time. It was a smooth night and conditions are great today although it’s cooling down rapidly in both the air and sea. The sky is very grey and overcast out of my porthole. Breakfast was the usual, bacon, mushrooms, spaghetti and baked beans. I worked out how to use the coffee machine this morning and had a nice coffee after breakfast and a cup full of cherries.

At breakfast I met Dave McCormack who was the guy who found Bill’s old caravan which had been lost and buried hundreds of kilometers out on the plateau from Mawson. He was amazed to meet me and see the print-out of the photo I had of him discovering it. We have a lot to talk about and to compare notes and photos. He is part of the boat crew for the re-supply. He said the old caravan is on display at the Launceston Antarctic museum and Bills old sleeping bag and primus stove is in the library at Kingston. They hope to build an Antarctic museum in Hobart soon to house all the old artifacts. Let's hope it happens sooner than later.

For lunch I had some beautiful looking duck, well it looked like duck but was actually a leather glove that fell off the chef’s hand and into the bowl. It was tough as an old boot and I was lucky I didn’t break a tooth. So then I went to plan B and filled my plate with prawns and after lunch I had another cup full of cherries. At 14:30 we have some field training to brush up on a few knots and things.

Dinner was pork chops, but I decided to have salad and prawns and some bread & butter pudding with custard. I found the shop today and bought a couple of shirts, a hat, a sleeveless jacket and a snickers bar. Just come back from a watch up on the bridge. I saw a tree branch with barnacles on it and a few lumps of kelp floating and quite a few sea birds. Several squalls went past showering us with hail. I find watching the sea and the huge waves smashing off the side of the bow mesmerising like watching a fire. It looks like the sea will start deteriorating from tomorrow and we can’t complain as we have had it so go so far.

Outside its bitterly cold now (4c) and everyone is walking around in fleece or jackets and I’m one of the few still in a T-shirt. There was a movie called “Paul” showing in the cinema but I decided to work on my computer instead. We have a competition to guess when the first ice berg will be. Most are saying Sunday, but I think not till we get below 60 degrees around Tuesday. Today I did my washing for the first time. 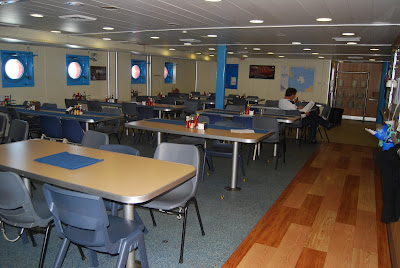 This is the main dining room. Expeditioners generally sit on this side. 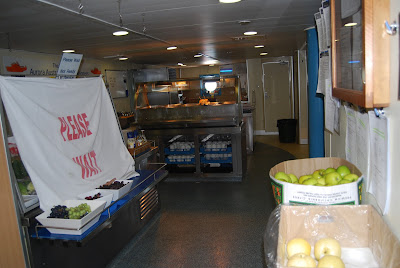 Here's is the bain-marie and salad bar area, coffee etc at the far end.
﻿ 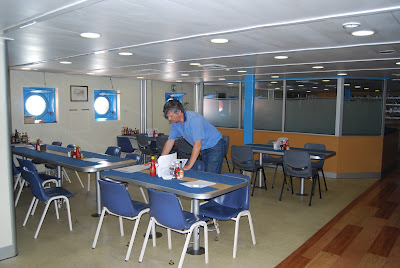 This is the crew side of the mess
﻿ 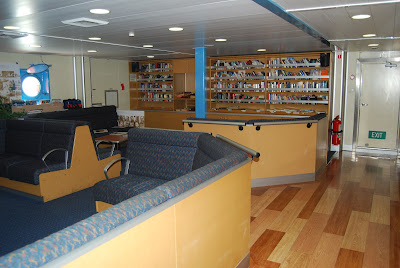 ﻿
This photo and the one below shows the quite large library / recreation area. 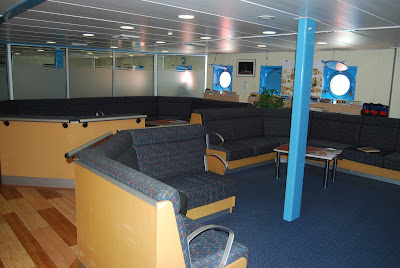