I woke up this morning to one of Mawson’s glorious days, no wind and minus six. The ocean is starting to freeze over with lots of grease ice and pan cakes everywhere. I spent the morning working on the orange Hag once again when Cookie asked me if I’d like to go to Mt Henderson to do a recce on the Eastern side. Well, is the pope catholic? Once again I was packed and sitting in the front seat of the green Hag before the dust had settled.
If we can confirm a safe route around the Eastern side we will mark waypoints and create a safe route and then I will program all the GPS’s so all expeditioners can venture around that side if they want to. The Hag’s are slow and quite noisy, but they are also warm, have plenty of room to chuck all your gear in and are much safer than a quad if you fall into a slot or crevasse.
I packed some vacuum packed pastor for dinner and a nice bottle of wine for a sundowner on the balcony of Hendo shack and tomorrow Darron and I hope to climb My Henderson peak.
We didn’t get to leave station till about two o’clock but it was blue sky and zero wind, just perfect conditions. We headed straight up the plateau to waypoint H6 (Craig at the wheel) and then turned East into no man’s land. We avoided a huge ice wave at the North West corner of the Henderson Massif stopping for a photo, and then turned towards Lake Henderson. It was quite steep on the way down and every now and then we turned back to make sure we were able to climb our way out without slipping. All seemed good so we committed ourselves and headed in. I was just letting the Hag drive its self without any power when at the last twenty meters it got steeper and the engine ran away and we lost traction and skidded the last twenty meters down to the lake. I thought it was great fun but Cookie had that worried look as if we wouldn’t be able to get back out, but I was more confident.

We cruised around the lake and got out and walked over to another smaller lake taking photos as we went. As the sun was getting lower, we didn’t want to waste too much time as we still had the East side to explore. We assessed the slope we came down and found what looked a better place to exit and up we headed all the way to the top without slipping at all.

From there we headed wide around the end of a huge bliz trail till it was low enough to cross and then headed south and in no time we found ourselves in a heavily crevassed area. I had a few beads of sweat on my forehead as I tried to drive around and negotiate the large two meter wide crevasses that I could see and hope there were none hidden under the snow. We pulled up at one large crevasse and I broke the thin snow covering and it all fell into a bottomless void possibly hundreds of meters deep. Then Cookie said c’mon lets go, “go where”, keep going straight ahead, I held my breath as I drove across the wide crevasse and we hardly left a track on the thin snow. Phew !!

The Hag’s a quite safe to travel in as they can cope with about 1.5 – 2m wide crevasses but you don’t want to be on a quad. A woman took a short cut here several years ago and ended up twenty meters down a crevasse with a 600kg quad bike on top of her and with multiple injuries.

Once out of the crevasse country we headed over to a huge ice scour and pulled up and went down for a walk. It was amazing with frozen lakes all around the base of the mountain range. You could see deep down into the frozen lake and could see frozen bubbles, cracks and rocks deep below in the crystal clear ice. We walked for several kilometres exploring and taking photos till we reached the end. There were many huge glacial rocks along the way and the walk was quite spectacular.

Once back at the Hag we headed for Henderson hut getting there just before sunset. We had to jimmy the door as it was frozen over covered in ice. This is the oldest hut at Mawson and dates back to the 60’s I think. Inside it was like a deep freezer. I started the heater and boiled some ice while we sat out on the balcony and watched the sun go down with one of the most spectacular views of the whole district. The beer was freezing in the neck of the bottle and it was a struggle to drink it before it was rock solid.

After a couple of beers we retired into the hut as it was bloody freezing outside. In the hut was colder and even after about four hours with the heater burning the ice all over the floor was still frozen. Even my pillow was frozen to the bed. After dinner and a few bottles of wine we went to bed. I wore all my cloths including my rabbit hat and gloves and it was still cold.

I had a pretty good sleep despite the cold and the claustrophobia of a mummy sleeping bag. After breakfast we waited till the wind dropped off around ten o’clock, then Darron and I attempted to climb to the summit of Mt Henderson. It was hard going up a very steep screed slope till we reached solid rock and pushed high for the summit. We rested in a saddle below the summit and dropped our survival packs. I took my gloves off for about sixty seconds to take some photos and without warning my hands went off. The pain was excruciating and no matter what I did I couldn’t stop the pain and warm them up. I should have known better. After a while they started to get better but still very painful and we started our assent to the summit. We pushed on up a very steep section and I rested on a ledge to assess the situation. Mt fingers were still very painful and our Antarctic boots are very awkward and clumsy so I made the decision not to push on any further without ropes as it was not worth the risk. Darron had a spare pare of woollen inner gloves and I put them on and after a while my hands came good. We took many photos from the ledge just five meters or so from the summit and had a rest taking in the breath taking panorama.

Eventually it was time to come back down and we started our decent picking up our packs at the saddle and picking our way through the dangerous screed slope. It seemed to take forever and by the time I got down I was exhausted and when I took my hat off I had ice dreadlocks and ice all over my beard. It was a great climb and we had some lunch and a hot drink before departing the hut.


We got home about seven o’clock just in time for dinner and after dinner I was so exhausted and my knees were sore, I went straight to bed and slept like a baby. 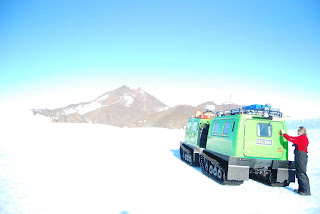 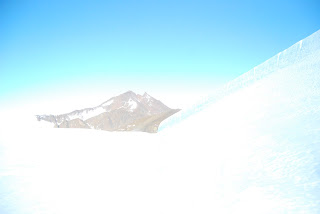 This is a good example how bright the glare is up on the plateau. You actually have to trick the camera to take a good photo. 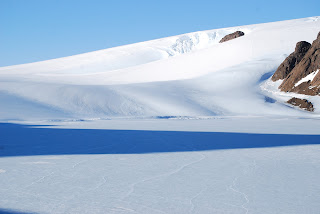 The steep decent down to lake Henderson 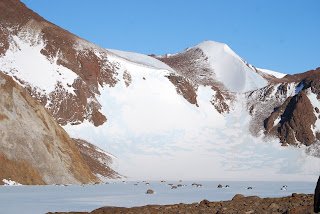 Henderson hut is right in the centre ridge. Lake Henderson below 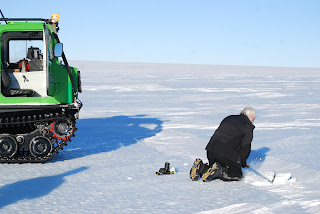 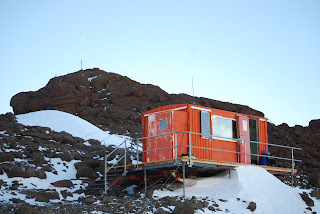 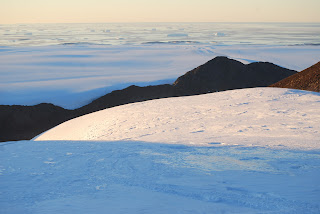 The view from Hendo hut 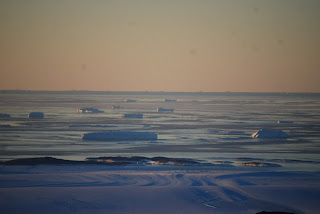 The view from Hendo hut zoomed in. Kellas Islands in front of the large berg 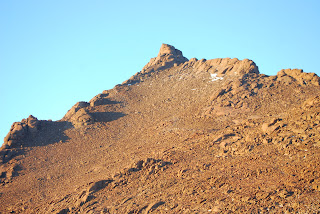 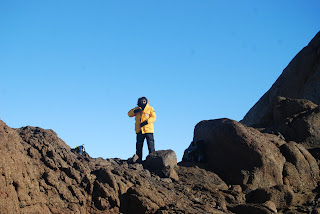 Darron at the saddle 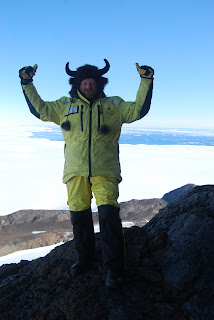 On top of Mt Henderson 951m
Thanks for the hat Sarah & Jackson :) 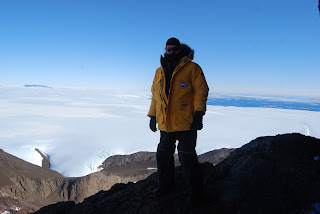 Darron on top of Mt Henderson 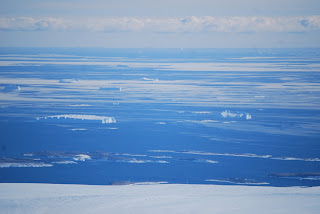 The view from the summit. The two wind generators at Mawson visible 19km away at the bottom 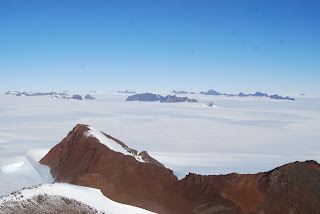