I woke up very tired and a little hung over when my APANSA filter change alarm went off. After APANSA I decided to have a spa. It was so hot, Keldyn keeps putting it on 38c, maybe he has been cooking crabs of something?


I put it back to 36 but after a while I kept falling asleep. To avoid drowning I got out and had a shower. By the time I walked back to the red shed my hair was frozen solid. I crawled back into bed for another couple of hours sleep. I woke up feeling a little better and went and made some soup for lunch, well opened a can. After a coffee I wandered down to the transmitter building saying g’day to my friend the elephant seal as I went past. As usual he just opened one nostril and snorted but I interpreted that as g'day Craig. He's a miserable sight at the moment shedding his fur and laying in his own  mess but still i think he's great.
Although my head was a bit mushy I was determined to get everything fixed up and working properly with my Flex5k.  I loaded PowerSDR & MixW onto the new PC, configured both programs and got them talking to each other and logged all the configuration settings to make life easy the next time. After about three hours behind the computer a blizzard had slowly been building up outside and I regretted not dressing appropriately when I left the red shed. Oh well, harden up. By the time I back up to the red shed my legs were frozen and covered in snow but it wasn’t as bad as I thought, my expeditioner tracky dax had held up to the extreme Antarctic conditions. I had another bowl of soup for dinner and retired early to update my Blog and to clean up a few things. 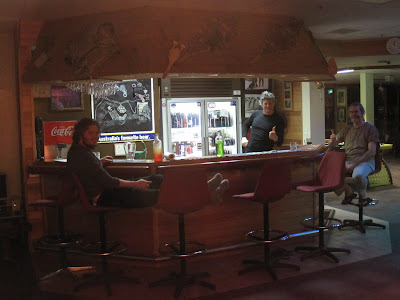