The doctor had been struggling with his heart monitoring machine and X-ray developing machine getting them to work over the network so I thought I go and help him out and get it all going. I made some cables and did some patching and fed all the info back to HQ for the propeller heads to program the VLAN ports and hopefully it will be all sorted by morning. I organised to get a cable drum I found, moved to the comms lay down area that had been “lost” for twenty years and organised for one of the new Hag’s to be put in the green store so we can get it finished, so we can start taking the new Hag’s off site.

It turns out the problem I am having with my Flex5k in the fire wire chipset in my laptop is not up to the task and keeps crashing. I can’t believe it, I tested it at home and it was working perfectly and when I upgraded the software version it all terned to shit. I reversed the upgrade and it no longer works. I have a SIIG Firewire 400 2-Port (6-pin) ExpressCard sitting at home still in its box I bought just for this purpose, thinking I don’t need it. How depressing, I’ll have to think about this one….....


I am enjoying contact with several expeditioners who wintered with my late step father Bill Kellas back in 1960 and its so interesting to compare notes and to learn how things were back in their time. I admire their guts, stamina and their spirit of adventure which sadly has been taken away from us due to "duty of care' and our desire for the American way where every body wants to sue the shit out of every body. At least New Zealand has held onto these important values in life.
I'll let Robbert tell you as it was.........
I am enjoying following some of your exploits - in particular your trip to Mt Henderson. Harry and I man-hauled a cut down sled with our food, sleeping bags, stove and cooking fuel from Mawson to the top of Mt Henderson. We did not have a radio as it was regarded as simply a half days walk. When we got to the top, we found a caravan that had been left there a few years earlier, but was totally submerged.
We entered through the roof hatch. The view through the side windows was through blue ice. Sleeping inside was as you can imagine like sleeping in a refrigerator - it was inside a refrigerator! The wind came up strongly and we were stuck for a day at least, but finally decided that we could not stay forever, so faced the weather and headed home. The wind abated as soon as we left the summit area, and our return trip was astonishing. We rode the sled for much of the time as it rattled across the sastrugi, minor cracks in the ice and everything else. I don't know what speeds we reached, but it was a lot faster than walking pace! I think it took us less than a couple of hours to get back to that final crest south behind Mawson base. Here is a picture of my companion expeditioner, along the way and at a 'rest' before the final summit climb.
Great stuff,
Thank you Robbert !! 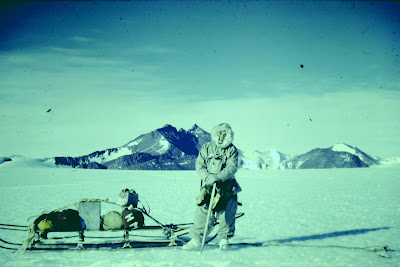 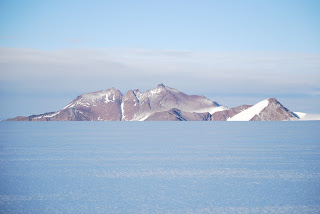 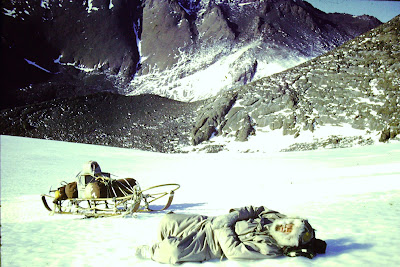 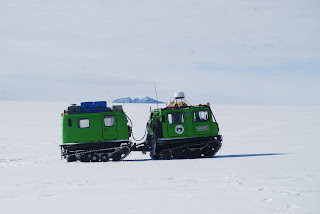