This morning we sailed back to Davis in 3o knot wind and by the time we got to Davis the wind had dropped enough to drop anchor and resume un-loading cargo.


This morning was one of those days you wish you never got out of bed. Everybody was spitting the dummy as they couldn’t make phone calls either to Davis or to home. We are on the very fringe of satellite operation here in Antarctica and it’s hard to explain to people that it’s a miracle it’s working at all. We have four satellite paths to chose from which can give us telephones and Email, and while at Davis we have another radio link to shore that can give us a slow Internet connection, yet if we get congestion on the phone circuits or degraded satellite links somehow it’s my fault. We are only a mile off Davis station, yet our phone calls go via two satellites over a distance of 100,00km++ round trip just to get there. I have suggested to head office a simple radio telephone or a private channel on VHF marine radio used as a hot line would solve all these operational issues, but they don’t want to listen.

Satellite systems on board Aurora Australis;
1)      INMARSAT Fleet Board band (Two independent systems, one on the starboard side and one on the port side and we can select either digital VoIP or analogue circuit) $0.38/m


4)      Least cost route through wave rider 2.4GHz link to ANARE satellite at Antarctic stations ($0.20/m)
I’m on the roster as coxswain tonight at 18:00, so I’m looking forward to getting out on the water again. Let’s hope some ice berg’s blow in and some elephant seal come around and make it an interesting evening and not too cold. After sorting out all the technical issues I spent most of the day updating my blog.
Water temp -0.3 degree
Air temp -0.25 degree
Wind W @ 5 knots
Lon 77.93E & Lat 68.57S 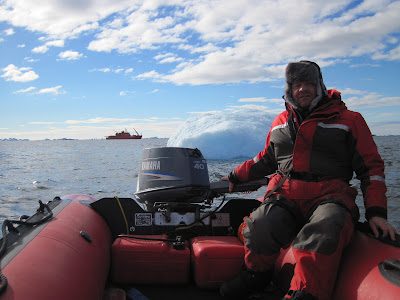 Working as coxswain on an IRB at Davis station
Posted by Craig Hayhow at 04:13