I keep hearing you say “what the bloody hell is APANSA”?

The Australian Radiation Protection and Nuclear Safety Agency (ARPANSA), as part of the Health and Ageing Portfolio, is a Federal Government agency charged with responsibility for protecting the health and safety of people, and the environment, from the harmful effects of ionising and non ionising radiation.

Once upon a time,

A Comprehensive Nuclear-Test-Ban Treaty (CTBT) to ban all nuclear explosion tests was opened for signature in New York on 24th September 1996. Australia signed the Treaty on the same day and ratified it on 9th July 1998. As of November 2010, 182 countries have signed and 153 have ratified. An International Monitoring System (IMS) is being constructed to monitor compliance with the Comprehensive Nuclear-Test-Ban Treaty (CTBT).

By analysing, integrating and comparing data from the IMS, the time, location and nature of a possible nuclear event can be determined. The network consists of 321 monitoring facilities and 16 radionuclide laboratories that monitor the earth for evidence of nuclear explosions in all environments. These monitoring facilities use a variety of methods to detect evidence of nuclear testing. Seismic, hydroacoustic and infrasound stations are employed to monitor the underground, underwater and atmosphere environments, respectively. The fourth technology detects radiation from atmospheric sampling and this is where I come into the picture.

Mawson is just one of the 80 radionuclide stations that can detect radioactive debris from atmospheric explosions or vented by underground or underwater nuclear explosions. The presence of specific radionuclides provides unambiguous evidence of a nuclear explosion. Forty of these stations will be capable of measuring for the presence of the relevant noble gases. The 16 Radionuclide Laboratories are used to verify samples that are suspected of containing radionuclide materials that may have been produced by a nuclear explosion. Mawson also has two seismometers installed ten meters underground in the vault under the cosmic ray building. Our radionuclide laboratory was completed around June 2012 and was certified in February 2013. 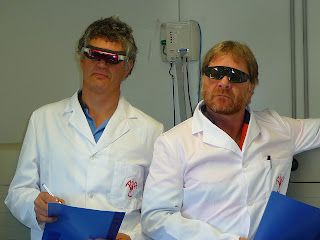 Chris & Craig, the two APANSA boffins
﻿
ARPANSA is responsible for carrying out Australia's radionuclide monitoring obligations to the Comprehensive Nuclear-Test-Ban Treaty, and also responsible for the installation, implementation and operation of seven stations within Australia and its Territories.﻿

The Process used to Monitor Radionuclide in our atmosphere 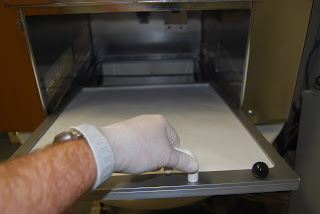 The Radionuclide Monitoring process involves collecting particulate matter from the air onto a piece of filter material in a high volume air sampler for ~24 hours. 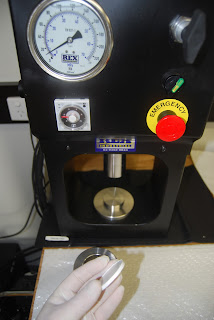 After this time the filter is taken from the air sampler and compressed into a disk. 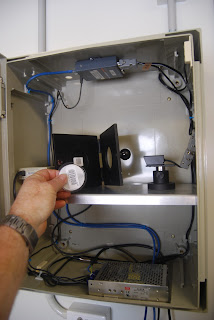 The disk is then placed in a chamber to allow natural radionuclides to decay for ~24 hours. 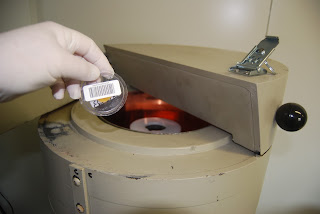 Finally, the filter sample is placed on a gamma detector for ~24 hours to be analysed. 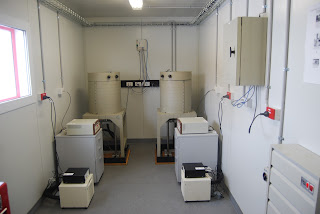 The two gamma detector's are cooled to -170c and shielded by thick lead chambers.﻿
A computer monitors the work flow and collects data. The data relating to the sampling conditions and radionuclides measured is then forwarded by satellite to the International Data Centre in Vienna where it is compiled and released to Countries participating in the Treaty.
Posted by Craig Hayhow at 00:58