I woke up dead tired again as I keep waking up at three am and can't get back to sleep again. This morning I figured out how to use OziExplorer and reprogrammed all our GPS units with the current waypoints and routes. Typical bloody software, took me two days two find the application, another two days to find the license key, another day to find the programming cable, half a day to figure out how to work the application and fifteen seconds to re program each GPS. In the afternoon I worked on the orange Hag finishing the comms installation.
Magnetic observations

One of the routine tasks for the Communications Technical Officers is performing magnetic observations. This science dates back to the 1911-13 expedition at Commonwealth Bay and is now performed at every Australian Antarctic base. Readings are done once a week in the absolute magnetic hut and are used to validate the data collected by the automated Variometer, which is located close to the Absolute Hut. In the Variometer Hut at Mawson there are two sets of three-axis magnetic sensors (of different makes). They send back real time information to Geoscience Australia in Canberra and this information can be accessed on their website (www.ga.gov.au).

The absolute magnetic hut at Mawson is the oldest structure on site having being moved here from Heard Island in 1954. The hut is built from all non-Ferris materials and before entering the magnetic quiet zone you have to shed yourself of any metallic material so you don’t introduce any magnetic field disturbance that would interfere with the readings.

A magnetic observation consist of 3 major sets of readings, these are Field Strength, Declination and Inclination. Each set is performed twice, the second time in reverse order. Field Strength measures the total Magnetic field strength in nano Teslas. Declination is the direction of the magnetic field East or West of True North and Inclination measures the angle at which the magnetic field exits the earth. Each set of observations is synchronised against the time signal from a GPS receiver so it can be compared with the automated data. All observations are taken at the exact same spot every time to maintain consistency. To do this the Absolute Hut is fitted with a plinth on which the instruments are mounted. Total field strength is measured using the magnetometer which feeds into an electronics box that outputs the readings to a pocket PC.

Declination and inclination are measured using a theodolite which has been modified to incorporate a magnetic flux gate that is aligned exactly with the azimuth and elevation axis. The output of the flux gate is fed into a Danish Meteorological Institute box which displays the relative field strength on a digital display. To measure the total field strength, the magnetometer is placed on the plinth aligning it with a set of outdoor marks and then readings are taken every 10 seconds for two minutes.

To measure the declination and inclination the theodolite has to be secured onto the plinth and accurately levelled, then using a reference mark to set the azimuth (horizontal) to a set value. This then becomes the reference for azimuth angles. For declination measurements, the theodolite is set at 90 or 270 degrees in the vertical plane (parallel to Earth's surface) then the azimuth is swung to null the meter. When the meter is nulled it means the field is exactly 90 degrees off, because the field is always changing, instead of trying to record the angles, the angle is set to a whole minute, record the angle and then every five seconds for 40 seconds, record the offset field strength.

For inclination measurements the azimuth is set to an value calculated from the declination measurements and then the theodolite is moved in the vertical plane until the reading is null yet again, this gives us the inclination angle offset by 90 degrees again. As with the inclination, the angle is set to a whole minute, recorded and then the offset field strength is recorded. After doing this, it is all done again in the reverse order, the measurements are then forwarded to Geo science Australia to be analysed. All the data collected from the Australian Antarctic geomagnetic stations and other stations around the world go into producing magnetic offsets on maps and charts to maintain the accuracy by updating the continually changing magnetic variation. 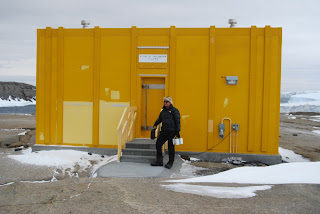 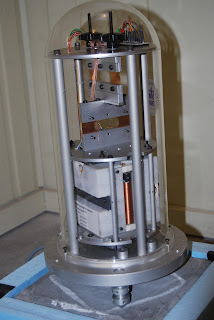 One of the two Variometers (Looks expensive) 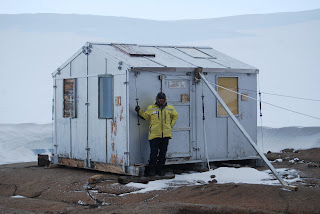 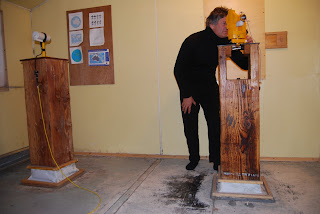