Keldyn woke me from my lovely sleep in and said “get your lazy arse up, were going to Mt Hendo at one o’clock”. This was his first trip away as a trip leader and I was touched that he asked me to join him along with John and Peter C. I still had time to get in a relaxing spa and to strap the nose bag on before heading off. It was cold as hell today, minus twenty two in the morning before warming up as the sun rose, but once we got up on the plateau the temperature dropped back down to minus twenty two again. 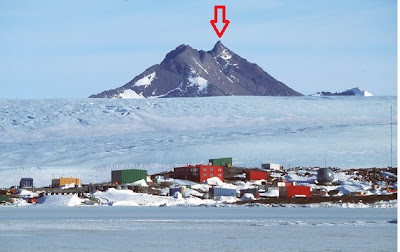 We had a nice ride up to Hendo on the quads and then unloaded all our gear into the hut. Mt Henderson hut is the oldest AAD hut probably dating back to the sixties and is more like a freezer than a hut. I wanted to leave the heater, oven and all the stove burners alight to thaw it out, but you know, safety first. I think all the walls and ceiling are full of ice as once you get a bit of heat going it starts raining inside. My pillow was frozen to the matrice.
Unfortunately the summit was engulfed in cloud and as strong winds were forecasted tomorrow afternoon, we made the decision to attempt a climb to the summit right away. John, who is our Field Training Officer, had brought rope, harnesses and all the climbing hardware to make the tactical climb to the last fifteen meters to the summit. (Don’t laugh you older expeditioners, but AAD forbids free climbing these days) 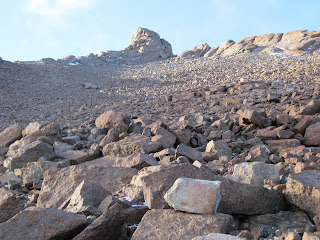 We set off up the steep screed slope in minus twenty two and in no time our breath was condensing on our faces. Keldyn was struggling with this huge ten kilogram stilsons he was carrying up to the summit as part of some crazy plumber tradition that will become apparent further down the page. It was a hard slog and the cold air was burning my lungs giving me coughing fits now and then. 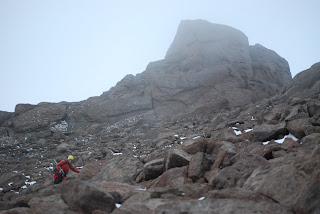 After about an hour of climbing we reached the saddle below the summit and dropped our packs and had a short rest. I looked like Father Christmas, Peter looked like a walrus and Keldyn looked about forty years old.  John wasted no time rigging up some anchors and started the summit climb while Peter belayed him. Once up to the first step, the rest of us took turns climbing while John belayed us. 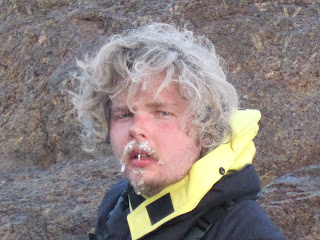 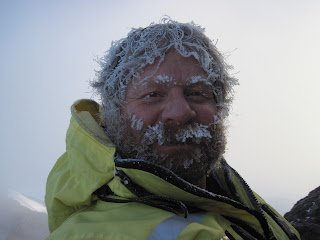 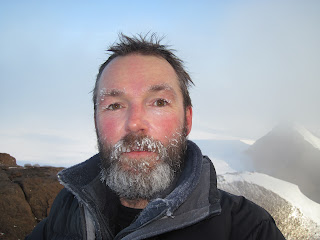 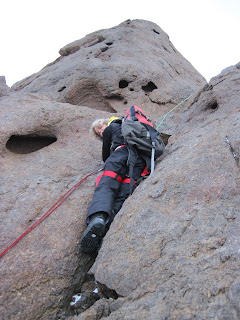 We had all reached Hilleary’s step and all was going well as John pushed on to the next step just below the summit. Peter went first, followed by Keldyn with his huge stilsons and then lastly it was my turn to climb the steep narrow shoot that leads to the summit step.
Our Arctic boots are fine for keeping the cold out, but as far as climbing goes, Ronald Mc Donald’s boots would be far better. I pulled and pushed myself high up through the narrow shoot as John belayed me and it was tight and hard going. I gave myself one last mighty push and my bloody boot wedged into the shoot and no matter how much I struggled I couldn’t remove it. The situation was hopeless and all I could think of was John initiating a search and rescue mission  from Mawson to excavate my foot with a jack hammer and how embarrassing it would be which gave me the awesome strength to finally pull my foot free at long last. The only trouble was my bloody boot was still stuck there!!
Oh shit, what next!!
I reached down and strained with all my might but there was no way I could free this boot, it was stuck there forever. How the hell was I to get back down to the hut and then ride the thirty kilometers back to Mawson in minus twenty two with only one boot? That’s it, I started to turn green and suddenly the back of my shirt ripped apart as I concentrated all my strength into pulling my boot out of the shoot when suddenly it came free. I was elated and mumbled a few swear words under my breath then tossed it up onto the step above to John’s horror. I started to climb once again and for fu#%s sake my other boot was stuck. Jesus Cr, oops its Easter, bloody hell, did this ever happen to Edmond Hillary?
You know the drill by now, I huffed and puffed and threw the other boot up at John who was still in shock with the first boot I threw at him. And in true legendary spirit I ended up summiting Mt Henderson in my socks!!!
The other guy’s were wondering what took me so long and what could I say? “Well guy’s, us technical free climbers take our time, we don’t need any fancy ropes and stuff like that” as I’m doing my shoe lace up.
Unfortunately the summit was clouded over, but it gave it that inhospitable look as we took photos of Keldyn fixing the tap washer with his huge stilsons. Peter checked out the power point while I attended the antennas that had long blown away. 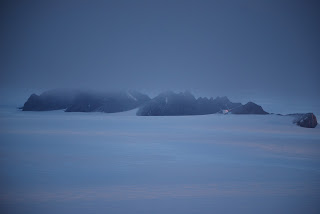 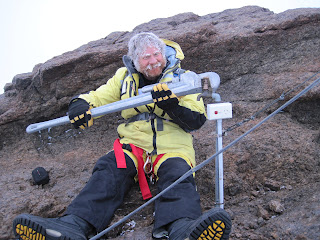 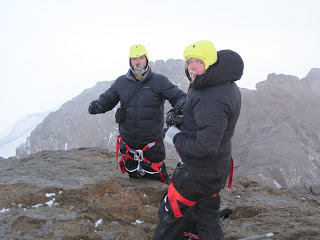 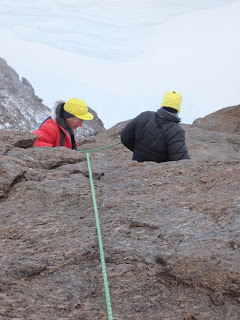 We spent about twenty minutes at the summit (most of that tying my shoe laces) but as sunset was fast approaching we decided to get cracking back to the cabin below. The descent phase was much less dramatic and as we descended the screed slope the sun was setting and looked fantastic out across the plateau as it reflected off the ice and wind scours. 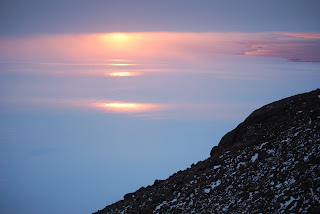 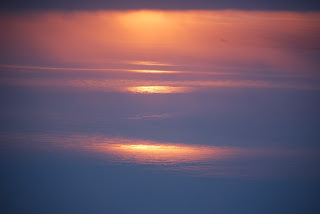 We made it to the hut with plenty of light to spare, thoroughly exhausted but extremely elated. We cranked up every burner in the hut in an attempt to melt all the ice off our faces, and then we cooked some awesome Fray Bentos pies in a tin. (Check them out) The pies were great and we washed them down with a bottle of red wine and then a bottle of Baileys with ten thousand year old glacier ice. Now that’s living!!
After about a four hour burn, the top of the hut was twenty eight degrees and the floor was three degrees still covered in ice and there was a jet of steam coming through the door vent and going straight up to the roof vent in a perfect science demonstration of heat convection. John slept outside in minus twenty two as he’s on a mission to do that for the whole year while we all slept inside the freezer.
Shortly after we turned off the heater and went to bed the temperature dropped back down to about minus twelve and hoarfrost covered the ceiling. We rose about eight o’clock and had something to eat and drink before setting off for another walk. We had planned to descend down the screed slope through Death Valley and onto Lake Henderson but it was really steep and was going to take a long time so we made the decision to climb another summit nearby. 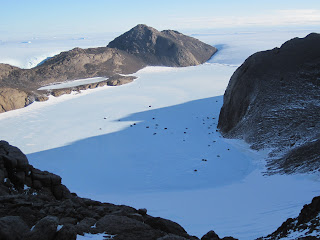 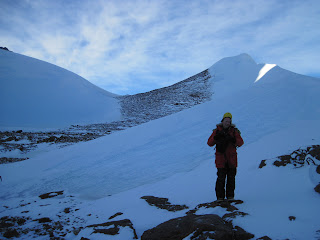 A rare photo of John
﻿ 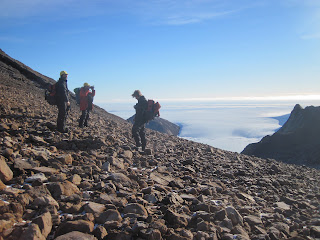 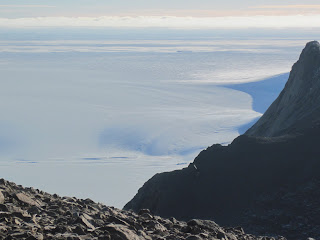 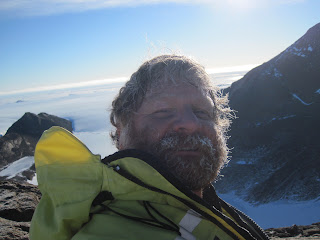 It was a hard climb and it didn’t give up its summit easy. By the time I got there I was exhausted but we were rewarded with a lovely clear view to the coast and we rested and took many photos. The climb back down was rather gruelling on the knees and once we reached the valley, we had to cross a dangerous ice bliz tail and then climb all the way back up the screed slope to the hut.
We were all completely knackered (Except for John) by the time we reached the hut but it was a really nice walk in perfect, yet cold conditions. We stayed at the hut only long enough to have a quick bite and a hot drink before loading up the quads for the thirty kay ride back down the plateau to Mawson. 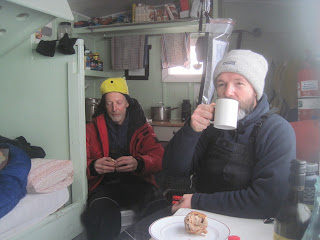 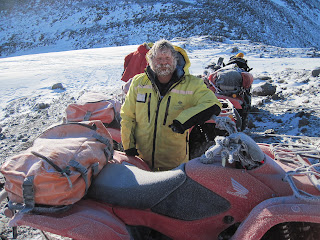 We got back to Mawson about three o’clock and I ditched the rubbish down at Warren and then took the piss tank over to the sewage treatment plant. Even though it was frozen I was gagging the whole time trying to wash it out with hot water. Then we refuelled  the quads, parked them up in the EVS and unpacked all our gear. 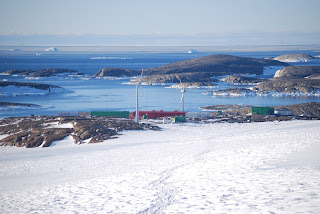 What a beautiful sight!
It's Home, it's Mawson.

Even though I was wasted, I did all my washing and hung it out. At six thirty we had our usual flash diner and afterwards while most of the blokes went to watch the footy, (we down loaded) I went to write up my Blog notes and was in bed by ten.
Posted by Craig Hayhow at 00:52