The weather has been looking pretty unfavourable for field training with 30-40 knot winds predicted for the next week plus 30 knot catabatic winds every day on top of this. Last week the AAD & BOM dropped our daily weather reports so we are now running blind and left to our own resources which I think is disgusting and an extreme safety hazard. We have to BOM observers feeding daily weather observations back to the BOM and we rely on the forecast to plan our daily and weekly activities, so I hope they reinstate these forecasts in the future.


Despite the gloomy forecast predicted, the wind dropped off to nothing late morning so we decided to go for it and made our preparations to ride to Rumdoodle hut via Mt Henderson hut by quad bike. We have to carry so much equipment that there is very little room for personal equipment, clothing and food. We carry survival equipment for shelter, clothing & bedding should we get caught out in a blizzard and quad bike retrieval kit containing ropes, pulleys, ice anchors, shovels etc. Then there is spare fuel drums, grey water drums, quad bivy bags, ice axe, navigation maps & GPS. Then comes our personal gear like camera equipment, food and clothing. 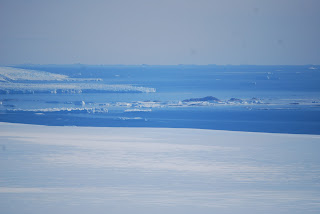 The ride up to the plateau was very exciting and once on the flat blue ice it was amazing. So much solid blue ice with all different surface textures. Most of the plateau around Mawson is blue ice with very little snow cover or sastrugi. (wind textured snow cover) We had to navigate precisely as there are many crevasses to avoid that will swallow up your quad bike and are hundreds of meters deep. A woman rode off course a couple of years ago and fell into a crevasse and was lucky to survive with multiple serious lasting injuries. We rode first to Mt Henderson hut perched 700m high up on a ridge in the Framnes Moutains. The door was frozen shut with ice and we could not get in so we just admired the awesome view out to the ocean where you could sea ice bergs in the distance and had a rest and a snack. We will have to come back with some equipment to get the door open and to make repairs to prevent this from happening in the future. 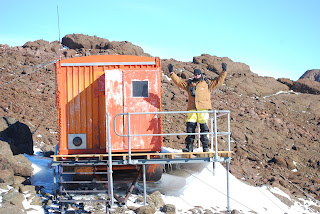 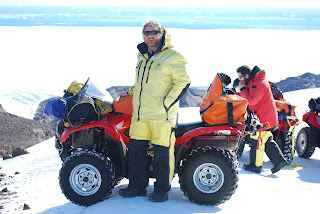 From Mt Henderson we rode across to Rumdoodle hut in the North Masson Range. All riding involves following routes in the GPS to avoid crevasses and we stopped near one to take a look. It was snow covered and using our ice axes we broke through revealing the deep void below. Rumdoodle hut is at plateau ice level under the 875m Rumdoodle peak and is in a most beautiful setting. Out front are huge boulders slowly being carried away by the glacial ice. Some have the ice around their bases eroded by the wind and balance precariously on only a tiny piece of ice. 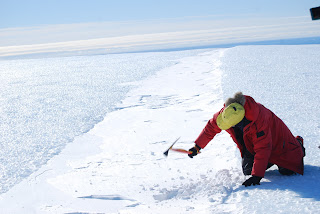 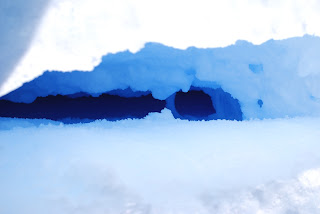 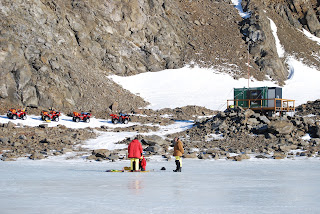 Most of the rocks and boulders that end up in the moraine line tend to slowly sink into the ice and disappear till they break out in ice bergs thousands of years later. The ice is amazing and acts like water in slow motion. There are many frozen lakes too which sounds absurd when everything is frozen, and in these you can see bubbles and cracks in the crystal clear ice and sometimes even see the bottom meters below. At Rumdoodle we did field training exercises on quad bike recovery using ice anchors and rigging pulleys and later we dug beds in the snow and slept outside that night. 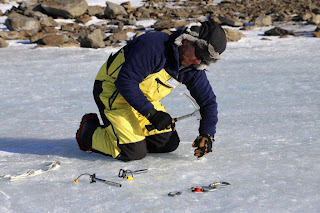 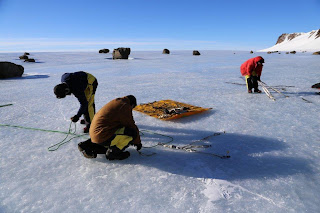 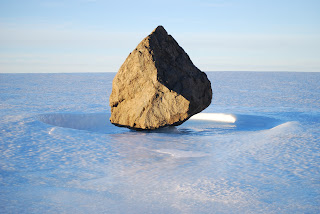 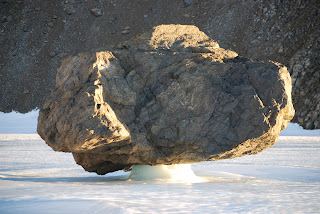 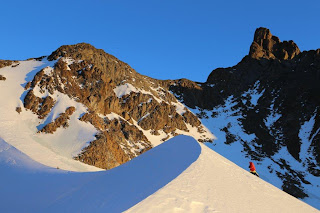 That's me high up on the ridge 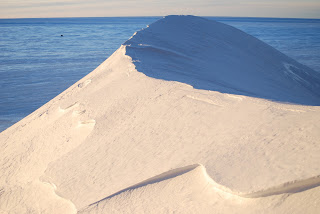 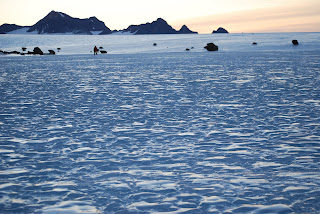 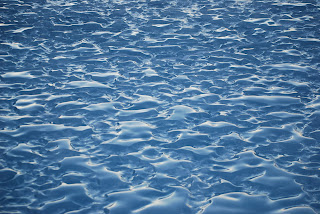 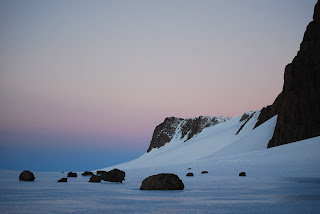 I took a lot of photos that night on sun set as the natural light was spectacular. I climbed high up on a snow drift and the view was awesome. I slept reasonably well that night despite the cold (-15) and every now and then the bullets of high strength wind that rocketed down the plateau. 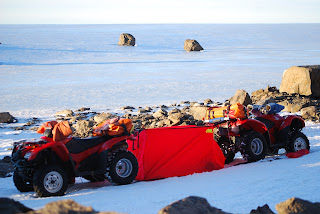 Friday after out 09:00 radio sked we headed off to Fearn Hill Lake which was amazing as you enter through a wall of banded ice. The lake was very clear in places and it was great to look at the bubbles and cracks suspended deep within. We came across a snow petrel nesting at ice level with his mate (?) frozen in the ice only a meter away. I found two more snow petrels frozen in the ice later that day. From Fearn Hill we rode to a camp location in the Central Masson Ranges and here we did more field training on quad bike recovery in snow conditions using snow anchors and we also practised search & recoveries in simulated blizzard conditions. We also did some navigation exercises using maps, compass and GPS. The magnetic variation around Mawson is 67 degrees and for those that don't know that is a hell of a lot. Perth has about 1/2 a degree variation.
﻿ 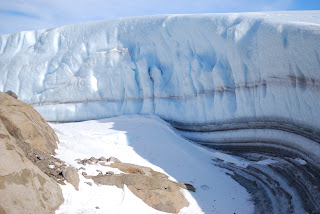 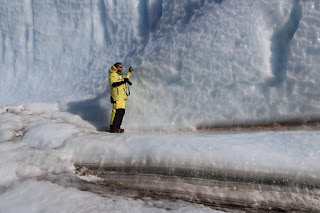 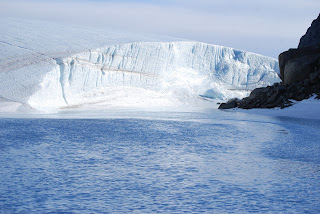 Snow petrel on the nest 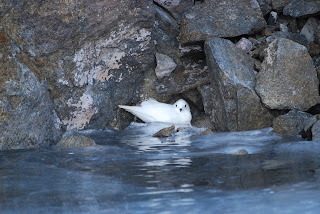 After a snack we headed back to Rumdoodle hut where we did some more field training and then had the rest of the afternoon off for sightseeing and photography. This time I went the opposite direction to shoot in the evening light. The ice plateau is under terrific tension and you can hear it cracking all the time as it slowly moves. It’s like its alive and as you walk wearing crampons it often cracks around you feet some time making a very loud noise which scares you. Once again I got some very nice shots.
﻿ 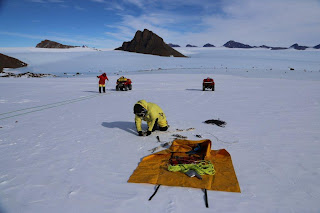 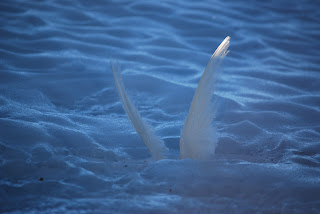 Snow petrel frozen in the ice 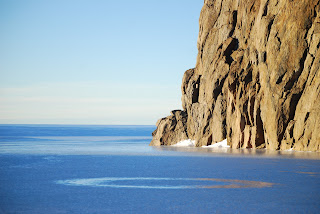 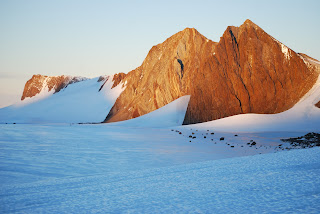 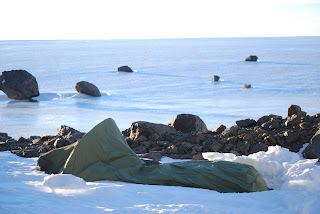 It was a very cold night and Saturday morning we headed over to Fang Peak hut in the David Range. The wind was quite strong at about 40 knots and I was not adequately prepared and got very cold. I had an exposed bit of skin on my neck which I couldn’t cover that was getting frost bitten and for a while my finger tips were in excruciating pain till my hand grip heaters got hot enough. The track got very rough with lots of sastrugi and blowing snow and at one stage I had to stop as my camera case came loose. It was a good lesson of what it is like during a blizzard on quads. It was a relief to reach the relative shelter at Fang Hut were we warmed up a bit before climbing high up on a ridge to take in the view.
Later we had lunch and a hot drink in Fang hut in -15 and then we got prepared for the long ride back to Mawson. This time I was much better prepared and had a great ride in the high winds over the sastrugi filming with my Contour as we went. Once we got the wind behind us and got out of the sastrugi and back onto the blue ice conditions were very pleasurable and I did quite a bit of filming all the way back to the station. 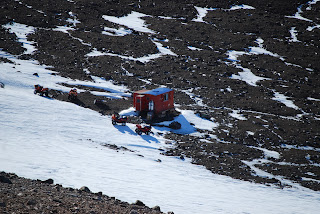 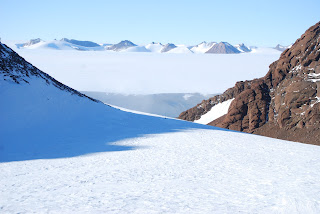 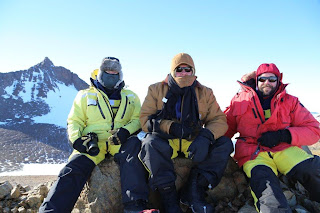 First stop was the incinerator to drop off our frozen toilet bag, next stop to the sewage treatment plant to empty our frozen grey water drum, next stop to the mechanical work shop to refuel the bikes and then up the Emergency Vehicle Shed to park the quads and to remove and store all the equipment.

We were all very tired and it was nice to clean up and have a hot shower. Saturday dinner was a collar event and Justin did himself proud with a three course French meal with scallops and prawns which was a pleasant change from dehydrated army ration packs. I was so tired but stayed up to be polite till I finished my bottle of wine then retired to my comfy bed for a magnificent sleep.