Yep, was VERY tired when I woke up. Once again I mostly worked on the orange Hag getting all the mechanical hardware completed. Keldyn dropped by to give me some moral support and I enjoyed the company. Let’s hope he doesn’t want some moral support when he’s fixing the frozen shit pipe !!


It was Jeremy’s birthday today and at dinner, Justin brought in a cake he made for him and we all sang happy birthday to him; Jeremy, not Justin. Latter I spent a couple of hours updating my Blog and then wandered up to bar catabatic to wish Jeremy the best for his birthday. Jeremy decided to go to bed early, but we decided to celebrate his birthday anyway. I brought out some cool music videos and Keldyn, Darron, Chris and I partied on. Allegedly at some point I woke up half the camp playing the drums and did pretty well playing darts with a bow and arrow. 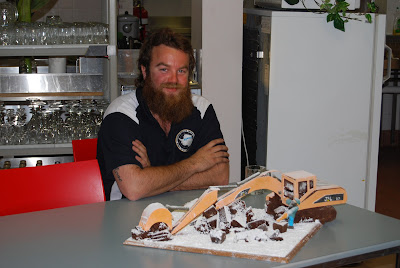