Today I had no Saturday duties so I got to sleep in but I still had to get up to do the APANSA filter change. After this I went out to East arm and spent the whole day installing Earth radials on the thirty four meter vertical antenna. It was hard work, the copper alone weighed about forty kilogrammes and I had to install about two hundred and eighty meters of cable. While working close to the water’s edge, I wandered over to take a look at the new sea ice and slipped A over T and landed hard on the radio in my right pocket – Oh gosh, that hurt. Bad sea ice F*%#$ !! 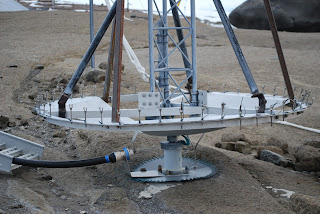 I worked right through till about three o’clock and then wandered back for something to eat and drink. I threw together a few scraps and Cookie came in an asked if I would like to try our new sea ice rescue craft. I still hadn’t finished what I was doing and I really didn’t want to get wet as it was about minus thirteen but said yeah no worries any way. 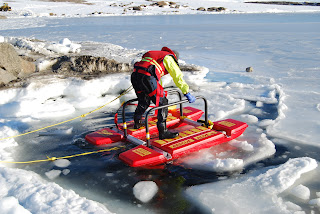 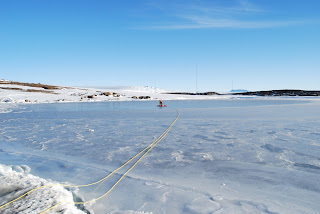 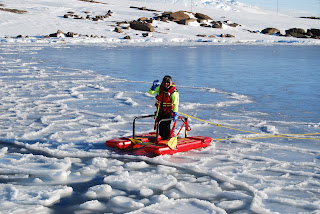 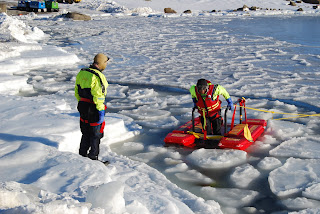 After the sea ice rescue craft practise session it was back out to East arm where I had to finish untangling a huge roll of hardened copper wire. It was bloody hard work and this took me about an hour and a half and then I could run out the last two radials. By the time I had finished I was buggered and I wandered back to the red shed for a nice hot shower and a feed. 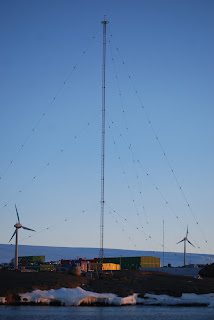 The repaired 34m vertical antenna﻿
Keldyn was cooking fish and chips at Lloyd's request as it was his birthday today and he loves his fish and chips. Lloyd is our station doctor and all round lovely guy. He has such a good sense of humour and great nature and he always has us in fits of laughter in his medical demonstrations. I stepped in and cooked the chips as things were getting a bit hectic in the kitchen. Justin, Darron, Jeremy and Trent had been walking out around Rumdoodle the past couple of days. Just then Chris walks in flaunting his new harcut, a bloody mohawk!! It looks like one of thos big fat hairy caterpillars is laying on top of his head. He must be running from the law or some thing but I dare not to ask.
The fish and chips were perfect and the best I had eaten in a long time and Lloyd was very happy and then of course in true Mawson tradition he was presented with his cake while we all sang happy birthday to him. 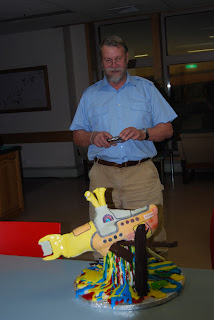 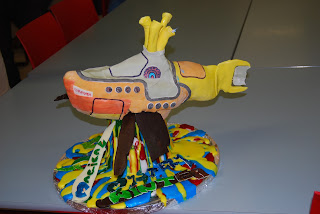 I had a couple of celebration drinks and then headed back down to the transmitter building to test the vertical antenna and to mess around with the tuning. At first impressions it seems to work really well on 80m, but not sure about 160m. On the way back to the red shed around eleven o’clock it was jet black outside and I didn’t have a bloody torch and there is no lighting. I stumbled my way through the dark hoping not to go aver. I was quite scary but I made it back in one piece. Rule number one, always take a head torch and leave a torch handy in the transmitter building.
Posted by Craig Hayhow at 10:25