Yesterday and today were very busy days. After the blizzard on Sunday I went for a walk around to make sure everything was OK. My 6m antenna was fine so my system seems to be working well. I walked up to the Cozray building to check the beacon antennas and they also were fine. While there I decided to check the volts on the beacon power supply as the transmitter sounds sick and varies in frequency. Bingo, the power supply was under rated and needs replacing. On the way back I dropped into the transceivers hut to make some power changes I have been meaning to do since the generator blew up on our first day.

The first thing I noticed was how cold the room was. The wall heater had died and it must have been minus fifteen in there. I couldn't reconfigure the power because I needed a power board, so back to Cosray I went. I grabbed a power board and a really heavy old style oil filled heater and carried it back to the transceivers hut. I reconfigured the power and while testing it the breaker kept tripping. Doh !!

Back to Cosray for another power board without a circuit breaker. This time things worked as they should and while I was testing the new system I noticed one of the backup battery's was dead.
Doh !!

No problem, we have four spares from the repeater we replaced last month, so back down to the tradies building I go to get the green Hag. Damn, it was full of bliz which seems to get in from the tiniest cracks in the door seals and some one left the caboose side door open so that was full too.
Doh !!

I clean out the Hag, warm it up and then drive it down to the ops building and load one of the heavy thirty kg battery's into it then head off up the hill to the transceivers hut. I lug the bloody heavy battery in and wire it up and before turning things on I checked the voltage and discovered they are six volt batteries.
Doh !!

So back down to the ops building I go in the Hag, get another battery and turn around and back up the hill I go again. This time I wire them together to make twelve volts and all is sweet. I test everything and its working perfect. So I return the hag, then climb back up the blue ice to the receivers hut to pick up the spare heater to take all the way down to the transmitter hut where my ham shack is. I noticed the battery in the emergency lights is dead too. While at the transmitter hut I get a power supply to replace the one on the beacon up at Cosray.

On the walk up I stop into the ops building to make some new leads for the power supply then off on the long walk back up to Cosray. I change the power supply and its all working perfect and the output power almost doubles from 180 to 270 EIRP and the frequency is now dead stable. Good job.

After work, I decided to test my amp on 160m on the vertical antenna I installed radials on Saturday as I got an email from Paul in Queensland who wanted to try a rare contact to Antarctica on that band. My amp was doing all sorts of weird things and making arching noises and just would not load up and was tripping out so I decided to remove the cover and take a look.

There is a 160m band switch and the contacts were loose and overheating so I spent the next two hours carefully dismantling them and cleaning them then carefully reinstalling them nice and tight. I was really satisfied I had found the problem and fixed it forever. I started tuning again and at first everything was working perfect when all of a sudden it started to do the same thing again. Bloody hell I thought. I keyed it up and decided to take a look through the side grill to see if I could see where it was arching from and when I looked in I could see FLAMES !! It was ON FIRE !!
Shit !!

I quickly found a screw driver and got the cover off and frantically tried to blow the flames out and after about ten seconds the fire was extinguished, not so much from by blowing but more so because it had run out of fuel. A nylon rod the band switch was mounted on was completely gone and the metal contacts were all that was left. Dam.....that sucks. I decided to call it quits and went back to the red shed. I dropped an email to the manufacture in Sydney and did some research and found out they had replaced the nylon band switch with a ceramic switch on the later model amps, so there must have been a few fires in the past I suspect ?

Today I went straight from breakfast down to the transmitter hut to check on the new heater to make sure I don't start another fire and everything was OK. So from there I walked all the way up to the transceivers hut to check the heater up there and it was working a little bit too well. While there I decided to swap the battery banks over so our emergency radio has the larger bank and I also put the web camera on UPS as I find it embarrassing how it goes off air every time we lose power.

So transceivers hut is now tickertyboo, so off I go to Cosray to check the beacon. Due to the extra power the beacon was running very hot (as I suspected) so back down to the ops building to make up a cooling fan. I made up a cooling fan then walked all the way back up to Cosray and installed the fan, now everything there was tickertyboo.

On the way back to the ops building I run into Keldyn and he tells me my mega earth cable is ready that I got him to weld up for me so I about turned and headed down to the tradies building. The earth cable weighed a tone and it was a real hard slog carrying it all the way back to the transmitter building where I soldered a large lug onto the end of it making just as much smoke as yesterday. Somehow I don't think the smoke detector is working in that room?

Once finished I lugged the bloody thing all the way out to east arm where the 34m vertical antenna is. I had to lie on my back in the snow to drill the holes and then I laid out the forty meters of cable and chucked the 100mm x 1500mm pipe into the drink. Now that should do the trick.
I went back to the transmitter hut and opened up my burnt out amp and bridged out the 160m band switch by soldering the wires and gave it a smoke test. Perfect, now my amps tickertyboo too !!
I tuned it up ready for Paul to call tonight and went off for dinner.

After dinner on the way down to the transmitter building I got two buckets of water to pour into my 6m antenna mast forty four gallon drum to cement all the rocks and gravel together and to glue the drum to the rocks and also to give it more weight so it’s not going to go anywhere next blizzard. I called Paul for an hour and heard bugger all. No path between us at that time so we will have to do some more research on that one. It was poor conditions any way on all bands so I decided to call it quits for the night. 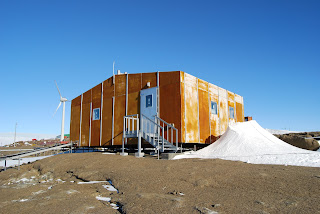 The transmitter building circa 1960's 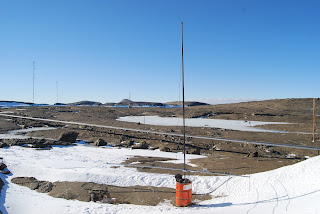