Once again I mostly worked on the orange Hag as well as going out to east arm to take photos of the damaged antenna. Don’t you just hate it when head office says OK yes, so the antenna is damaged, can you please send us some photos any way, like they don’t believe you? 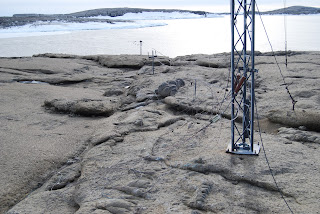 Hmmmm..........sure looks buggered to me ??
If you leave any timber outside here it gets sand blasted by the snow in blizzards and after a while it really brings the grain out and it looks fantastic. Every time I walk past this piece I cant help but stop by and touch it and take a photo of it if I have my camera on me. 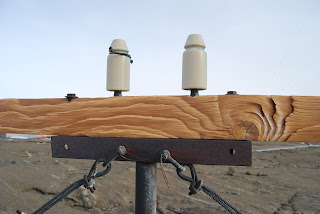 It was bitterly cold today and the harbour is now about eighty percent frozen over now. 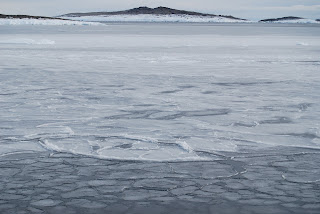 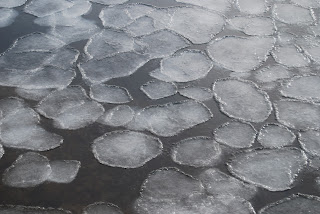 On a happy note, I managed to repair my alarm clock today that has been playing up since I got here. The bloody clock kept resetting and going off at random. It turned out to be an intermittent fault in the power supply. I just have to fix my hands now, all the joints in my fingers are cracking and it’s very painful. I tell you, everything buggers up down here.
Oh, and it was Chris’s birthday today and Justin made another one of his creations for the occasion. 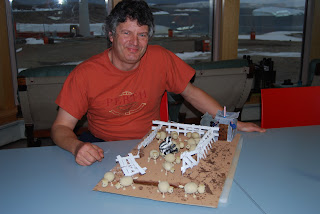 My mission for tomorrow is to finish that bloody orange Hag so I can roll it off the production line and then start on the blue Hag……..Ugh !!
My friend George who wintered with Bill, my step father at Mawson in 1960 sent me this extract from his diary and I thought it was brilliant. (I hope you don’t mind sharing it with the World George?) George and Bill brought the first motor bike down to Antarctica and it’s interesting to compare their recreational pursuits to ours of today.


12.15 Am writing this up at the table (under the bed) which is probably the first time ever. I've got on the lager-cock lamb’s wool inners. Checked the all sky camera before coming here and the bloody thing had jammed last night -- eff! It had been cloudy tonight (before pictures) but is clear now so I set the camera going. I was slushy today and it was quite ok. Kev woke me at 9.30 and I went into the kitchen, had breakfast and did the washing up. Worked like a slave after lunch as Ralph (bless him) said I could piss off for the afternoon and he would look after afternoon tea. I finished the dinner dishes at 1.30 and got dolled up ready for a ski drag behind the motorbike -- leather pants, etc. Felt as hot as hell as I was getting dressed. Went down to the sea ice to meet Bill on the bike but he'd pissed off to Castle Berg. Geoff and Nev were fixing the jeep. I had a couple of runs on the dog lines slope with skis (no stocks). Bill turned up and we set off for Castle Berg in whiteout conditions. There was no wind to speak of. Just outside the harbour we ran into some deep drift and I jumped onto the back of the bike and we dragged the skis behind. 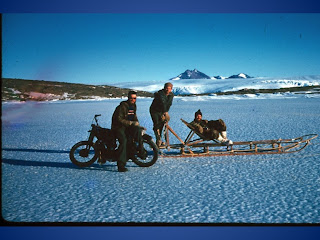 
We hammered out past Flatoye (to the left) and then onto the long stretch to Castle Berg. The surface conditions were bloody good in some places and bloody bad in others. I donned the skis and for a while found this slippery ice a little hard to savvy. After a while I found that the best way to traverse rafted blue ice was to have the skis about 18” apart and to run on the inside steel runners.We went along very well. Once I had to let go of the rope to avert a collision with some icy outcrops.


We reached Castle Berg where we met Harry, Terry, Graeme. They, with Viv, Doug, and Rob had come out on the Fergy. Bill and I circled the berg. The ice was really smooth and as slippery as hell. I was able to pass Bill on occasions when we swerved.We met the Fergy. Rob took over riding the bike.


He took off – but didn’t know that I was hanging on. After a while he woke up and then I started swerving.Unfortunately I overdid it at one stage and pulled the back wheel from under him. He fell spectacularly. I was ok except for the tangential speed that I’d acquired.After this Terry joined his rope to the bike and we both skied behind, first with Rob and later with Bill.Hell! We went well. Terry would lift his rope and I’d dart under to the other side.(Terry had come out on skis behind the Fergy and Rob had come out on an Auster ski).


We had great fun and eventually headed towards home at about 3.30.The tractor was well ahead and Bill was hammering to catch up to it. We clattered over rafted ice and the skis broke off the overhanging bits. Once the ice didn’t break and I came to (minor) grief. Bill came to what appeared to be an open patch and wrapped on the speed. We slivered over it in 3rd gear at 30 mph. Terry and I were finding that the concentration was beginning to tell. I had to let go at one stage when I got out of control. Once free I picked up stability again.


Once again we raced off. Reaching our fastest speed for the day things were getting a bit blurred. Terry and I both had some near-misses: skis crossed, diverging or off the ice, when CRASH!! Terry came a horrible cropper. He was really hurt. Bill and I went on another 100 yards or so. I thought Terry was ok, as he usually was, but Bill gave me a frantic wave. Poor Terry was in pain. His right thigh was hellish, he said.


Bill raced off and got the tractor. I gave Terry my leather pants and windproof to keep him warm. 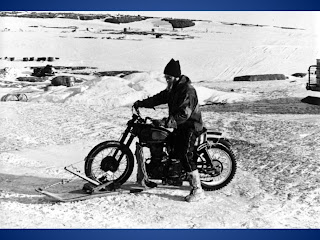 
We bundled him onto the sled behind the tractor. Bill and I went back via the motorbike, me on skis. We had to give up on the skis on the stretch before Mawson and give them to the tractor to take back. We raced off with me at the helm. Whiteout conditions made things hard. Inside the harbour we came across Geoff (doctor) and Nev testing the jeep. We gave chase but the bastards thought that we were fooling.


Bill and I hit a hell of a bump in the whiteout. The bike lifted like a great bird and Bill got spring-boarded up to my shoulders – I could feel him groping to pull himself down. We came down true and straight and continued on – surprised. Well, after that I was slushy. Terry’s leg was ok. And we had a forum after tea including the topics:


Is the newspaper too pornographic? What about a fire alarm?
Later we had “The green years” and then I went up to the all sky camera hut. My desert boots got wet from snow melt inside there and when I jumped outside onto the rock they stuck to it.