After doing the APANSA filter change I spent all morning sorting out over 200 Emails. I really hate it when you’re copied in on every single email as it just fills your inbox up with clutter and it’s easy to lose track of things you need to do. It’s just one of those things you have to keep on top of. I was really hoping to finish the orange Hag this week, but there have been too many interruptions and Chris has been avoiding it like the plague. Once a few more guys have become trip leaders they will be wanting another vehicle to take up onto the plateau and so pressure will be on shortly. 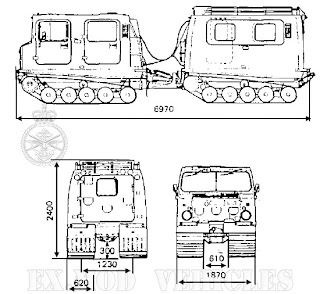 The Hägglunds Bv206 is an all-terrain articulated tracked carrier that was a Swedish design, first built in 1976 for the Swedish army. Over 11,000 vehicles have been produced and they are used in more than 37 countries worldwide, but sadly they are now out of production. The AAD has about twelve Hägglunds Bv206 and about four Hägglunds Bv206F, the fire fighting variant. About every five to seven years they are sent back to Kingston and totally reconditioned. The two Hägglunds sent down with me look so good I thought they were brand new. 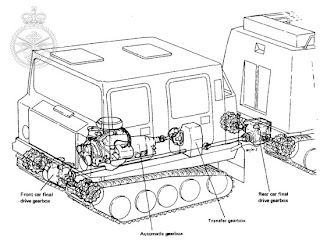 The Hägglunds Bv206 is also fully amphibious, with a speed in water of up to 4.7 km/h and 55 km/h over land and this makes them ideal for traveling over sea ice. The Hägglunds Bv206 has a curb weight of 4330 kg and can carry a further two tones of pay load, yet the specific ground pressure of the Front & Rear car is only 11.6/13.6 kPa (1.68/1.97 PSI) with 0.2/0.05 m sinkage. Our configuration seat four people in the cabin and can carry two tones of payload in the caboose. Our versions are fitted with a Mercedes-Benz 6 cyl, turbo diesel 136 hp engine and a Daimler-Benz W 4A 040 automatic 4-step forward, 1 reverse gear box. The body is made from glass fibre reinforced plastic with PVC foam insulation. 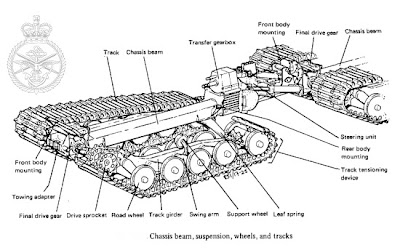 Some other statistics are: Maximum grade hard surface 60%, (31°) deep snow 30% (17°)
Range on roads 300 km, Minimum operating temperature -52°C, Length 6.9 m, Width 1.87 m, Height 2.4m. The drive just like a car but are very noisy and can be quite rough going over sastrugi. The best thing is that they are warm, can traverse a two meter wide crevasse and you can just throw all your shit in the back and hit the road without too much fuss. And that about all you need to know about Hägglunds or locally refered affectionally as Hägs.