Today was a very busy day as I wanted to get that Hag finished and out of the green store no matter what. I made up new cables for the HF radio & speaker and installed them and all worked well but when I powered up the VHF I discovered it hasn’t been programmed……..Great!

So then it was off down the hill to the tradies workshop to see what frequencies the green Hag has programmed. Just to be on the safe side I checked one of the utes as well. Then it was back up to the ops building to look for some programming cables, software and hopefully a configuration file but no such luck. In the end I programmed them the same as the hand held radios and while I was at it I got all the spares out of the green store and also the one for the new blue Hag and did them all at once and saved a configuration file.

For lunch Justin cooked up meat pies and they were bloody great, but half way through I realized I had either broken a tooth or swallowed my filling. Shit, not what I want down here. It’s not painful so maybe Lloyd can just put some glue over it or something till I get back home. If it gives me any trouble I will just get Lloyd to pull it out. Bloody thing, there’s always something falling apart. There is not much left I haven’t worn out yet, and to think of all the trouble and expense I went through doing the Antarctic dental clearance three months before I left. Waste of time?

On the way back to the Hag I tipped sixty liters of water into my six meter antenna drum to bind all the rocks together and to add a bit more weight to it as well as gluing it to the rock. At minus twelve it didn’t take long till it was frozen solid. Finally I finished wiring up the Hag and drove it outside to test things out. The radar and radios work fine but the GPS is not working….Doh !!

I also need to tune both antennas and program all the way points and routes into the GPS so it is going to have to wait till Tuesday now. After five, I popped into the transmitter building and my heater was working well keeping the room at sixteen degrees and outside there are large icicles all around the outside of the building coming out of the walls, so it must have a lot of ice inside it and hasn’t been heated for a long time. While there, I had another chat to Jeanne Socrates who is the oldest woman to sail around the world solo. She is now crossing the Australian bight heading towards Tassie. You can check her Blog at http://www.svnereida.com/ . After dinner we watched another one of Luc’s foreign movies called Как я провёл этим летом a Russian movie called “How I ended this summer”. It was about two weather observers on a remote Arctic Island and I thought it wasn’t too bad. 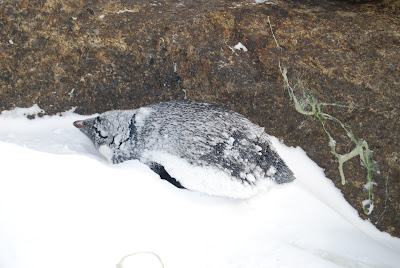 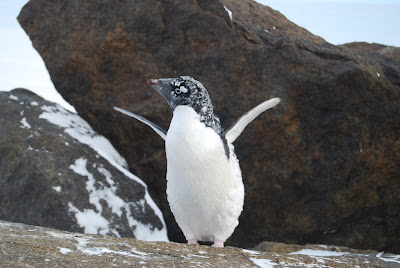 When he saw me, he got up, shook himself off and wanted to follow me
Posted by Craig Hayhow at 10:19